Assault on The Gods by Stephen Goldin

I picked up the book after seeing the cover. A woman with a weapon.

And the Title is almost catchy. I brought other books with it too. But I read it last.

Because of the blurb. It says it is about a woman. And I live in the time Feminism has a very bad image.

So any art material that focuses on modern Feminism, I try to avoid it.

But Assault on The Gods is far more than that and far better than I thought. 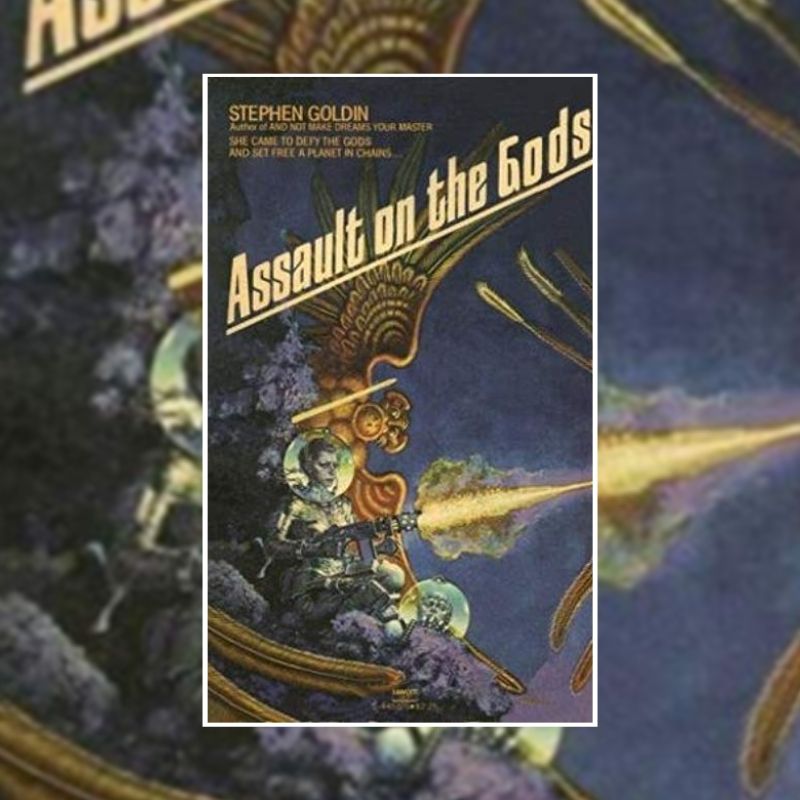 The Captain of the Spaceship, Dev, is a woman. And she is from Eoas. Eoas is considered as the most mature human society.

Typically, the other planet where human life exists, think of Eoans as the righteous and snobby people.

Dev does acknowledge that she is in minority, and the crew does not like to take orders from her, because she is an Eoan woman. But that does not stop her from being a Captain.

Eoans philosophy is to have faith in yourself. To think that it is you, instead of any external force, that brings change and make things happen. Consequently, it is you who is responsible for the consequences of your actions.

The moral standards of Eoans are pretty high and self-involving. But it brings the good compass to steer in the right direction.

Assault on the Gods

In the books, the crew tries to free the Daschame society from the Gods. Gods are actually people who came to plant, running from a war, and they were running the totalitarian government.

For the millenniums, they were controlling all of the people, and as a result, hindering the development.

But sooner or later, the moral compass does show the right direction. This is what Eoans believed that you, yourself are capable of having good morals, and you do not need Gods.

Well, the crew do attack the gods, and after struggles, they kill them.

But what all this means:

But again, I also believe in Gods. But not in scaring one, but in Loving one. I am a Muslim, and I think our God loves us. Yeah !! There are so many questions I cannot answer. because logic ends where faith begins.

I am a man of faith.

Must Read this review of this Book

But I like the ideology of Stephen Goldin. So instead of talking about this, I will talk about the Plot:

It is good. Fast-paced, with descriptive and logical events, the story continues. Of course, as all the stories, the protagonist is more wise, smart, morally good, and brave than any other characters.

But she is Eoan. And that is the point. The Eoans society who does not believe in any god is more advanced than any other societies.

What I like most is how the story tries to put everything into the view. I do the beta reading, and it very important for me to that story do not do false fact, or make an assumption, or alter storylines.

It is smart writing. Stephen Goldin explained the Sci-F- elements wherever it is needed.

Dev, with her knowledge, and wits, move the team to the center of the mountain so they can kill the Gods.

Whenever the situation arises, Dev does come up with a solution. There is no coupon plotting, but it is an adventure kind of Sci-Fi.

Assault on the Gods

Read this, you will not regret. Good book with a strong female protagonist. And very nice criticism of Gods and Religions.