What to do if you die but get 7 days to live? You will be trying to live you entire life in those 7 day life.

These best under the Whispering Door quotes try to capture the essence of the book that tells this story.

We all have to die one day – lucky are the one who live. But then what is their to life? What should you live?

Going to beach. Hike. Watching mountains. Rivers. Water. Snow. What it is that make life good?

Out with friends, drinking, doing drugs, riding a horse, buying property, killing someone, breaking a chair, bashing your head into the door, throwing a brick on your feet, air conditioner, eating good food, sleeping, doing work, earning money, having a room to yourself, what it is you will be doing if you know you are going to die?

Would I still be doing this stupid work that I always do?

No one knows. Who knows are not the lucky one.

Best Under the Whispering Door Quotes 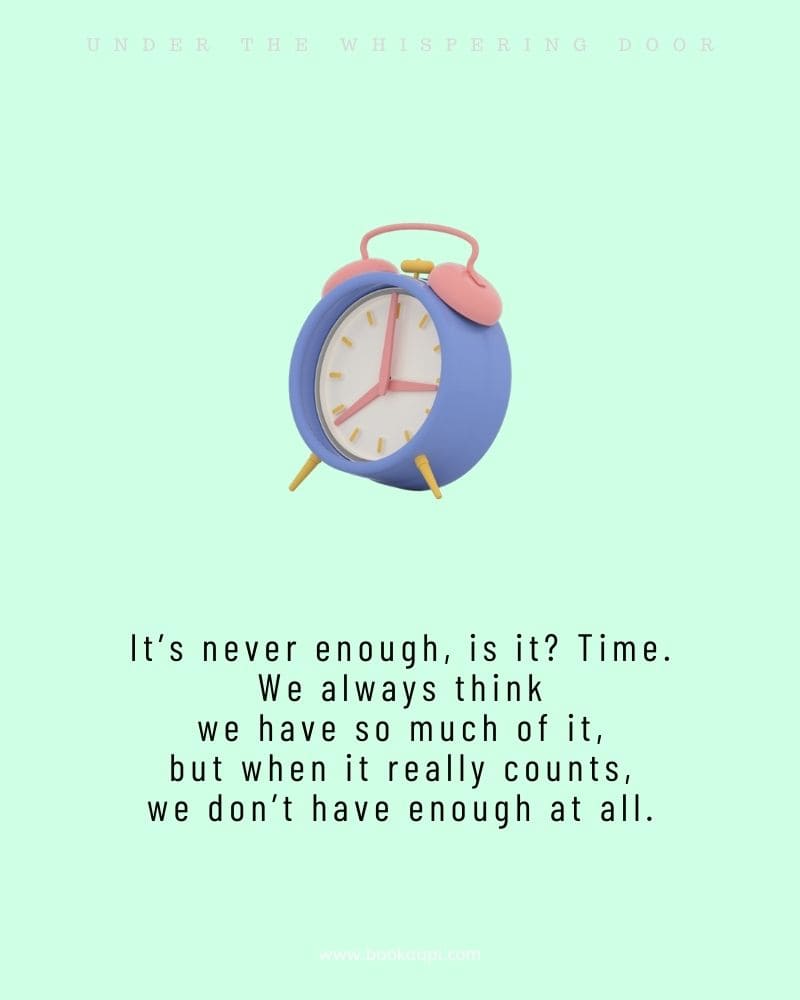 It’s never enough, is it? Time. We always think we have so much of it, but when it really counts, we don’t have enough at all. 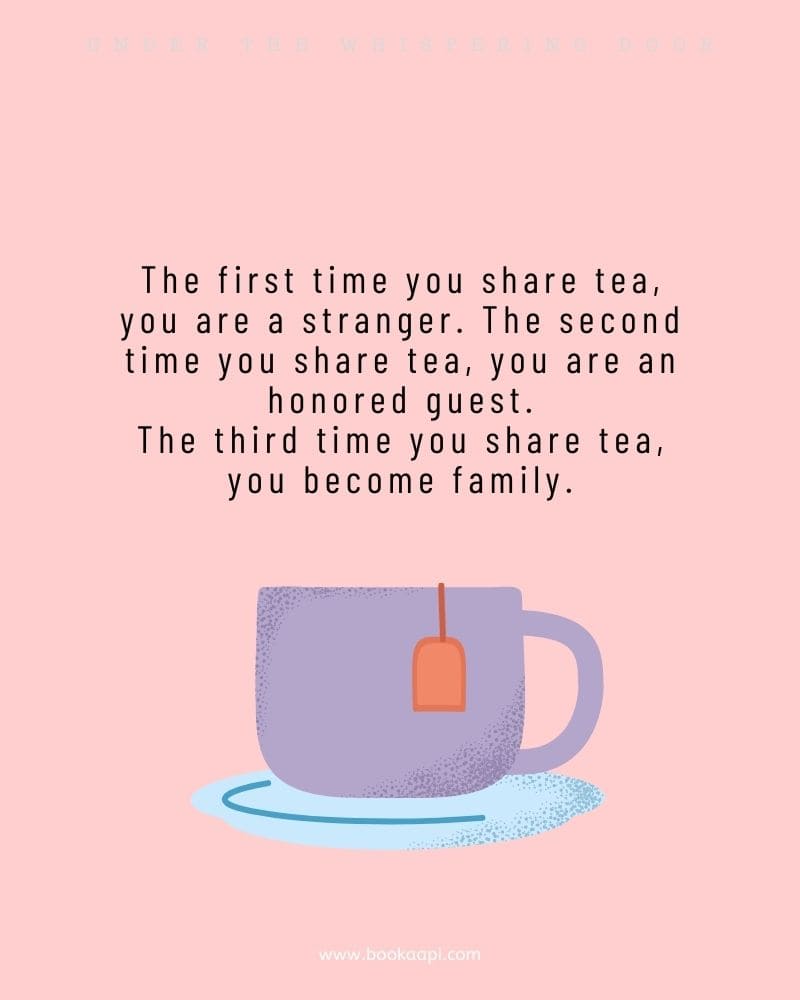 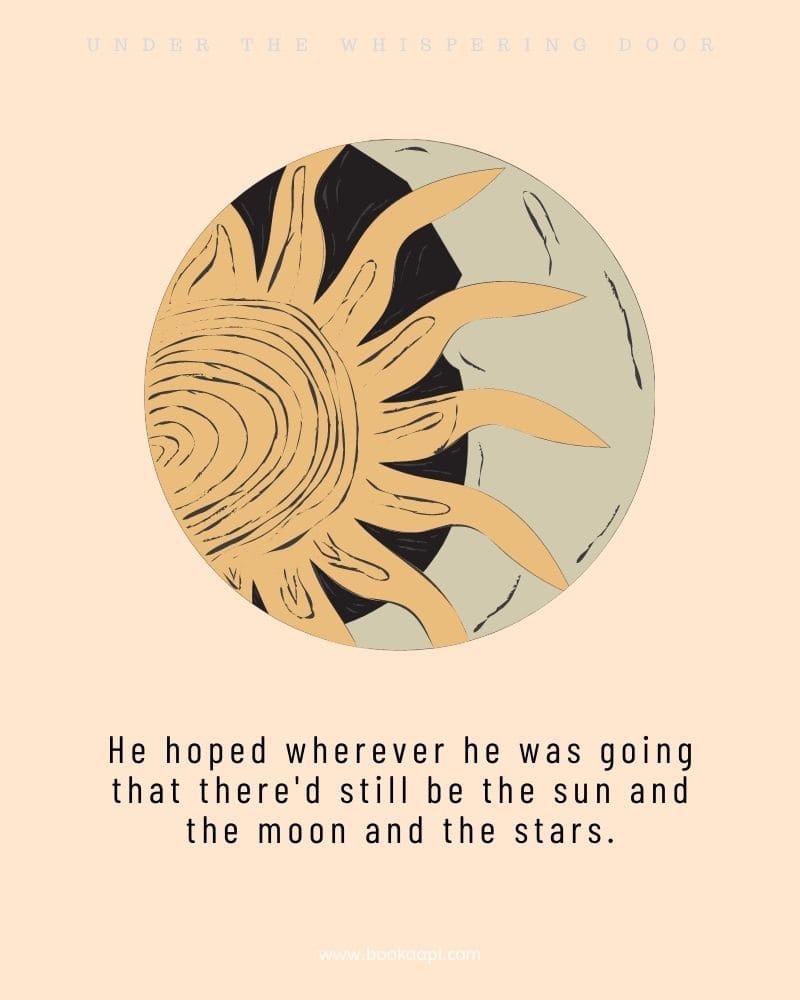 He hoped wherever he was going that there’d still be the sun and the moon and the stars. 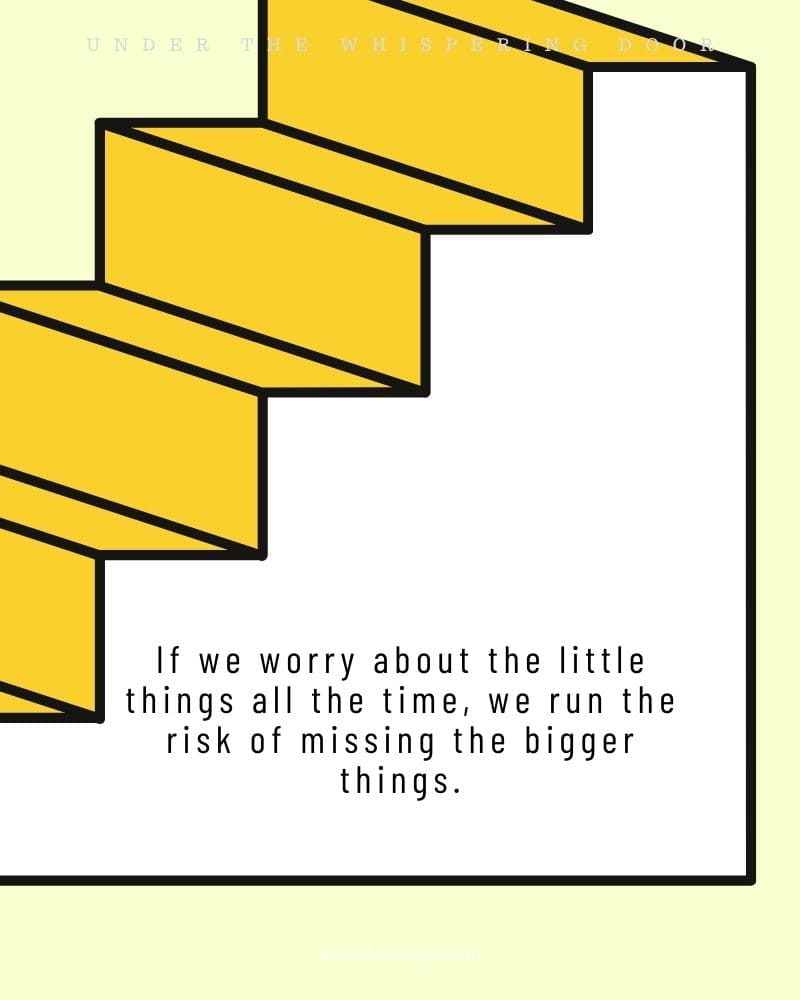 If we worry about the little things all the time, we run the risk of missing the bigger things. 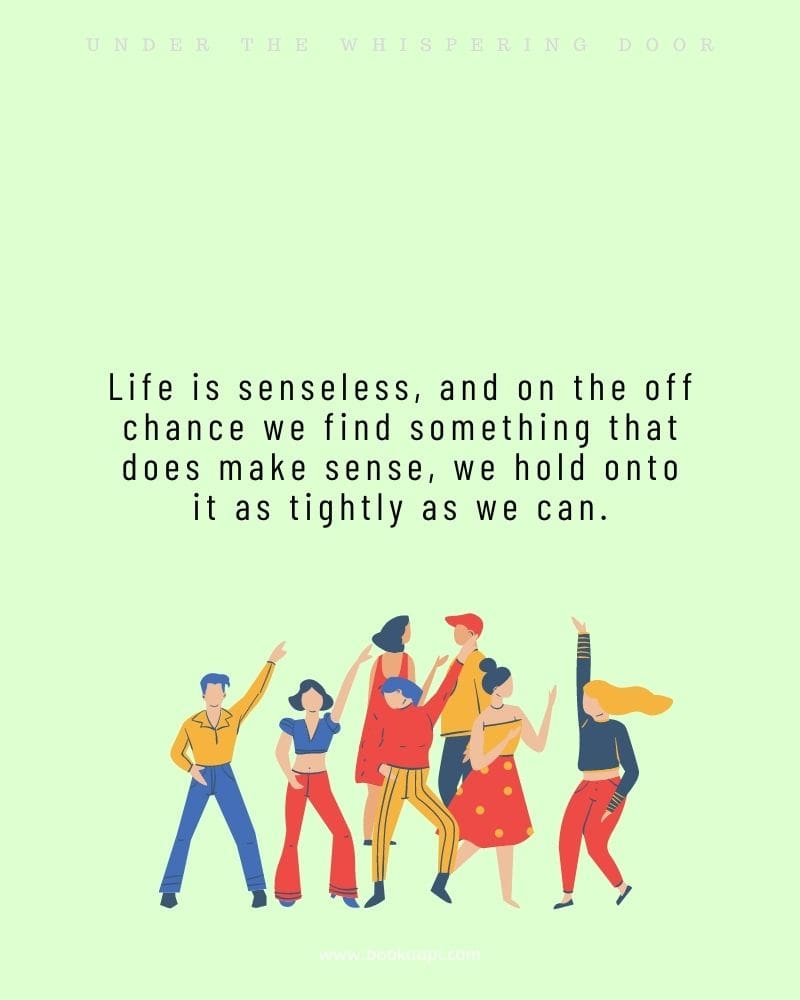 Life is senseless, and on the off chance we find something that does make sense, we hold onto it as tightly as we can. 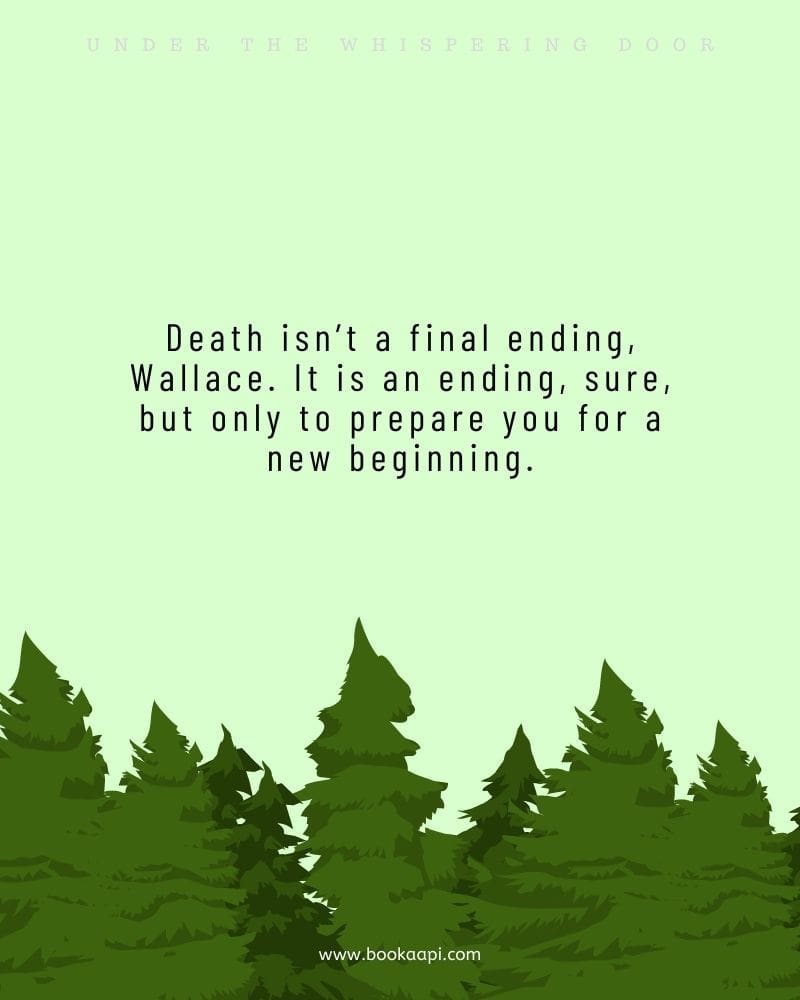 Death isn’t a final ending, Wallace. It is an ending, sure, but only to prepare you for a new beginning. 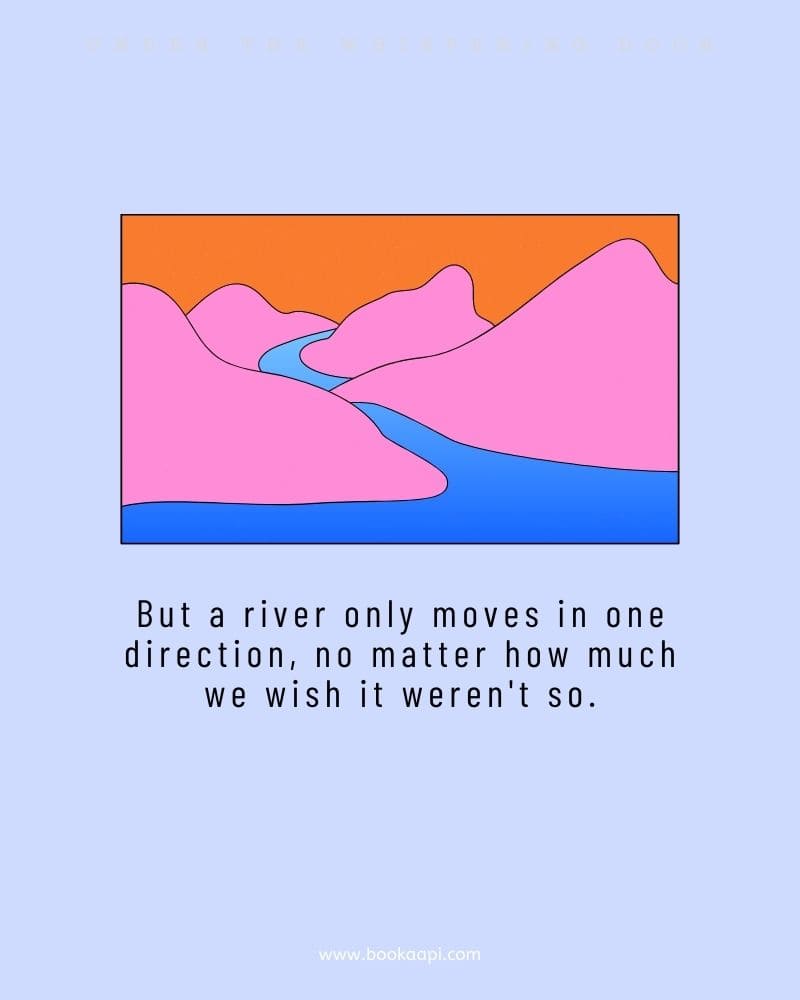 But a river only moves in one direction, no matter how much we wish it weren’t so. 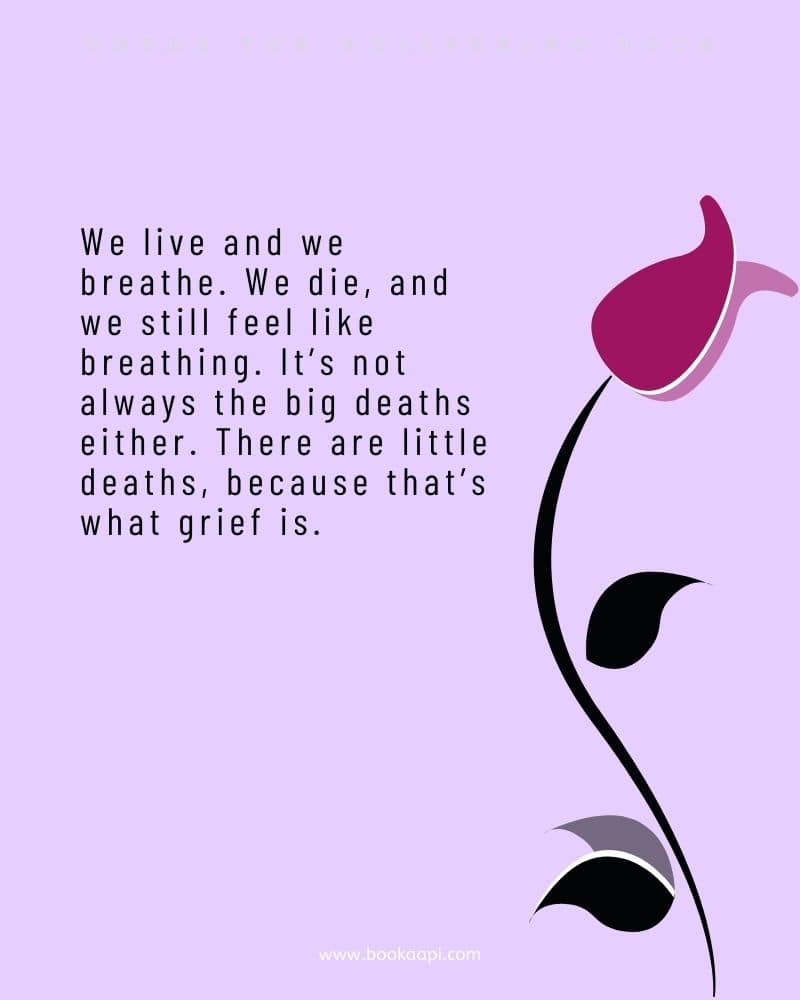 We live and we breathe. We die, and we still feel like breathing. It’s not always the big deaths either. There are little deaths, because that’s what grief is. 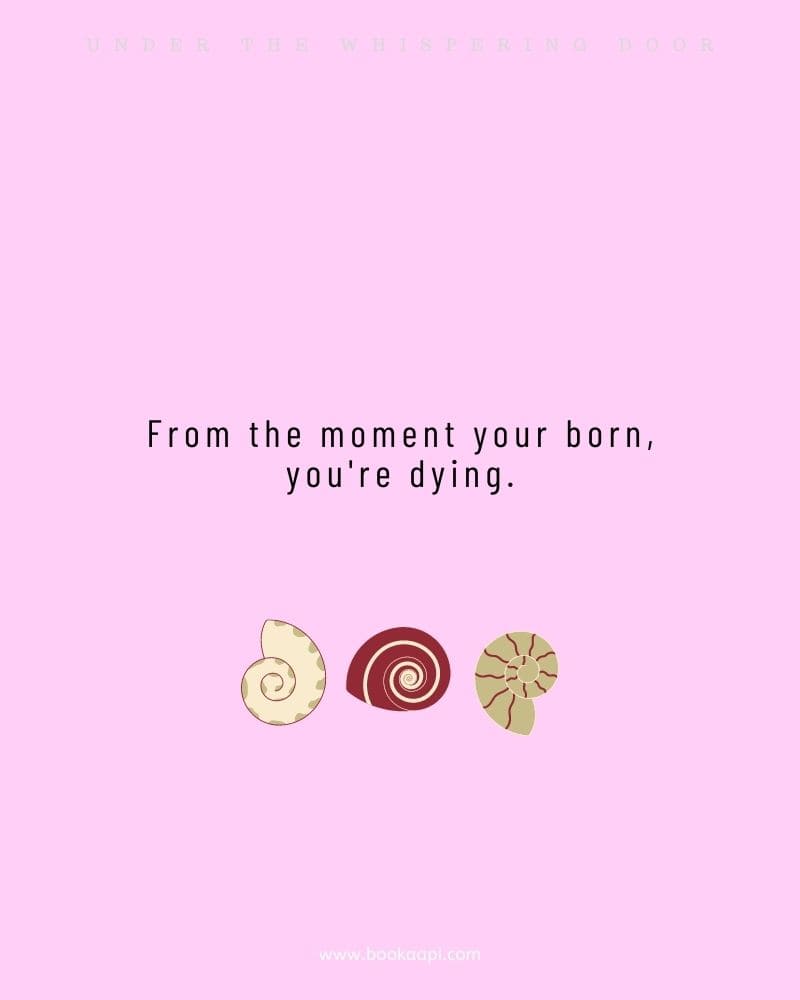 From the moment your born, you’re dying. 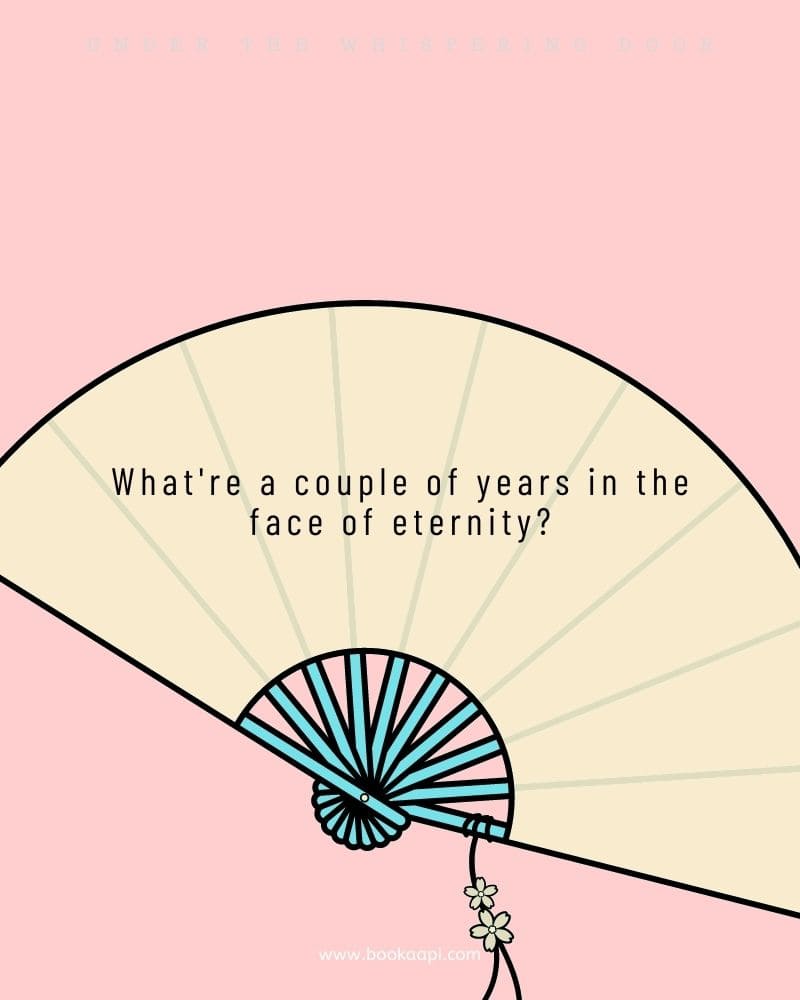 What’re a couple of years in the face of eternity?

Never forget where you come from, but don’t allow it to define you. 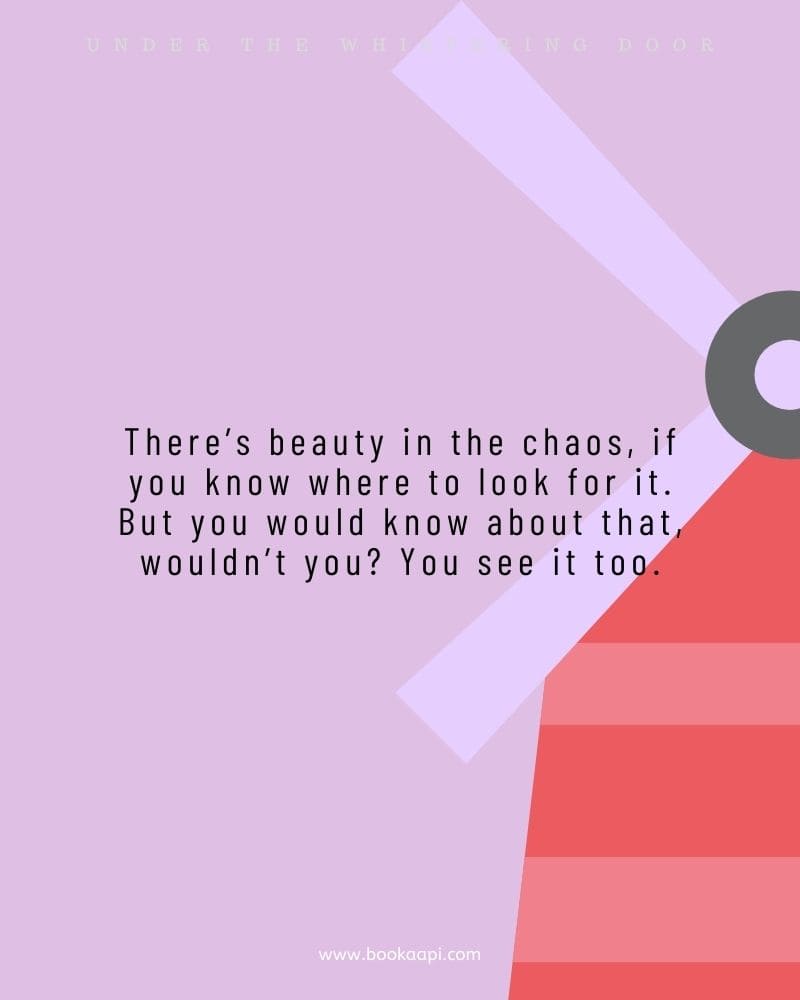 There’s beauty in the chaos, if you know where to look for it. But you would know about that, wouldn’t you? You see it too. 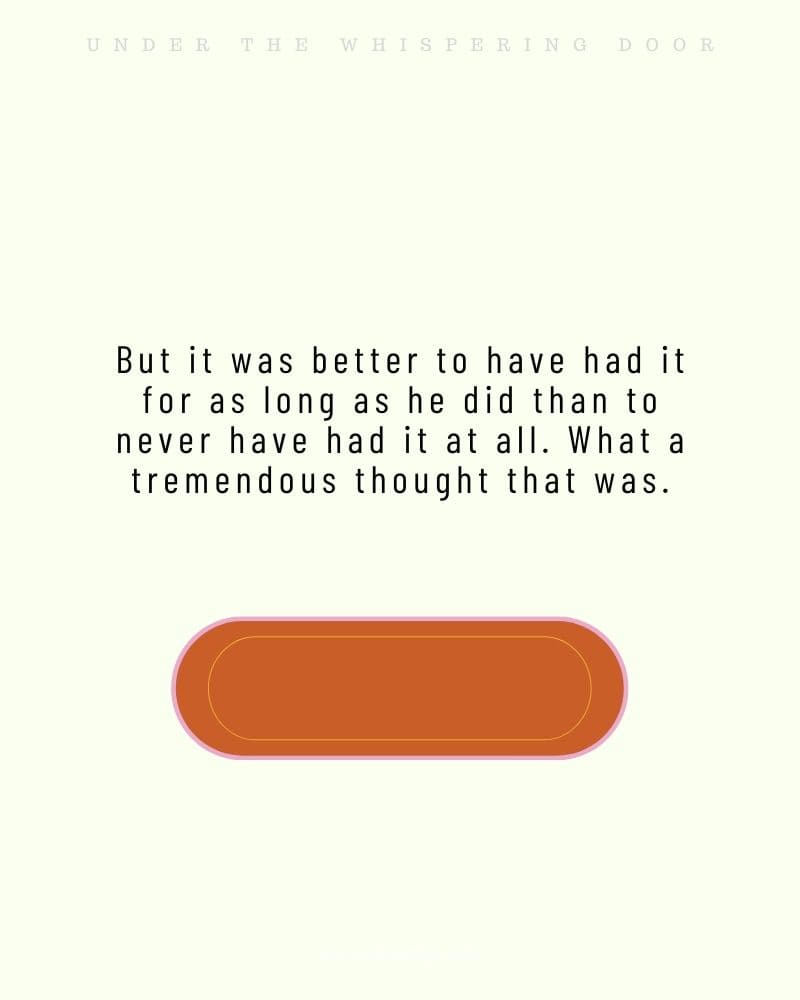 But it was better to have had it for as long as he did than to never have had it at all. What a tremendous thought that was. 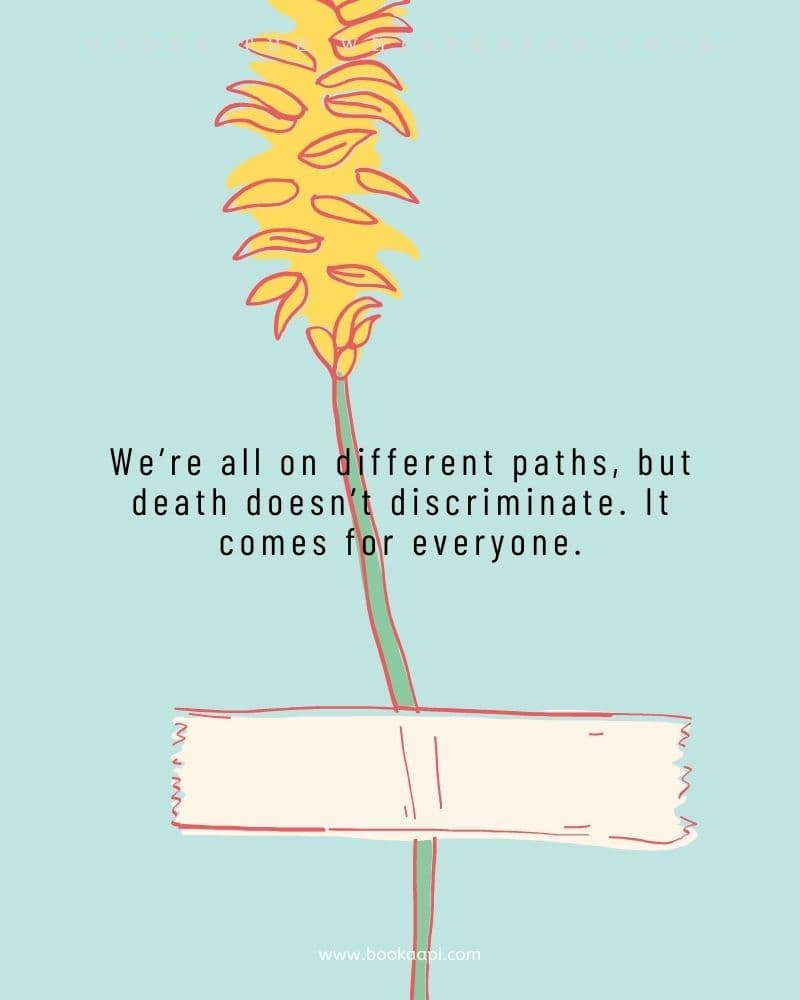 We’re all on different paths, but death doesn’t discriminate. It comes for everyone. 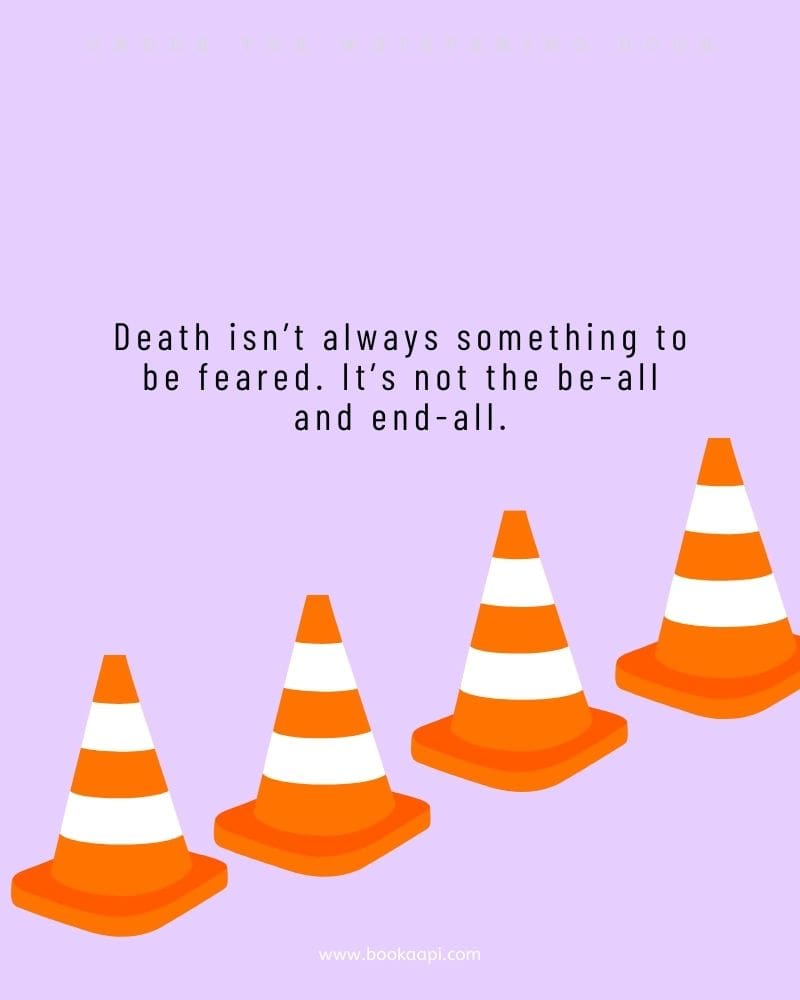 Death isn’t always something to be feared. It’s not the be-all and end-all. 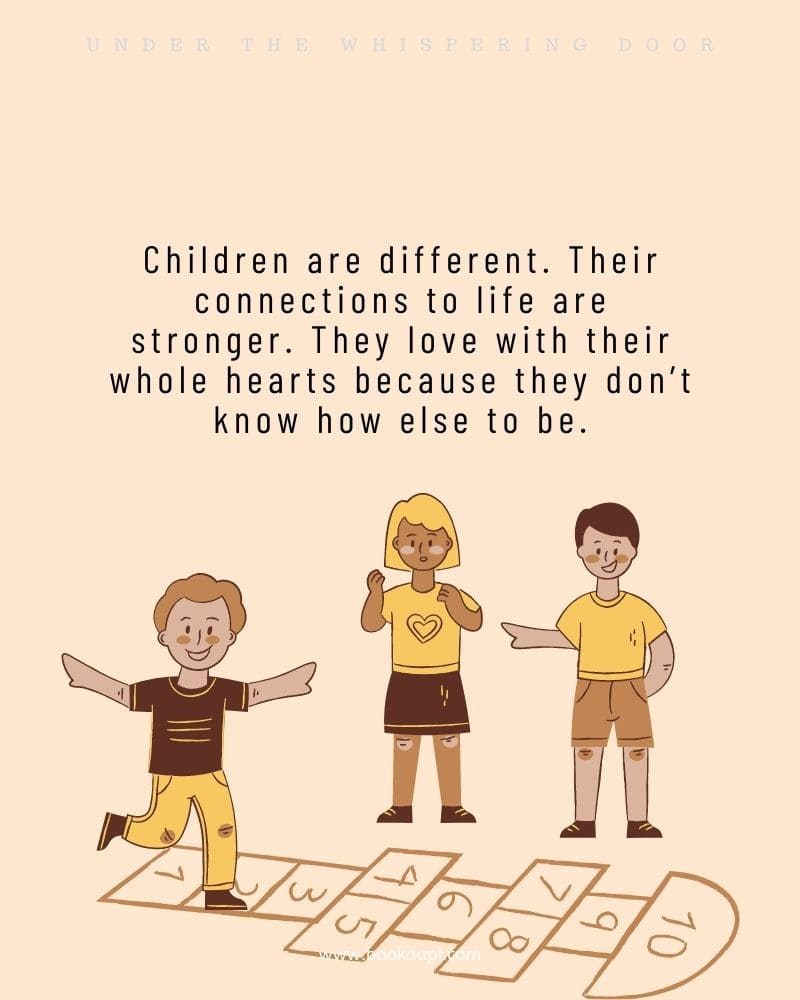 Children are different. Their connections to life are stronger. They love with their whole hearts because they don’t know how else to be. 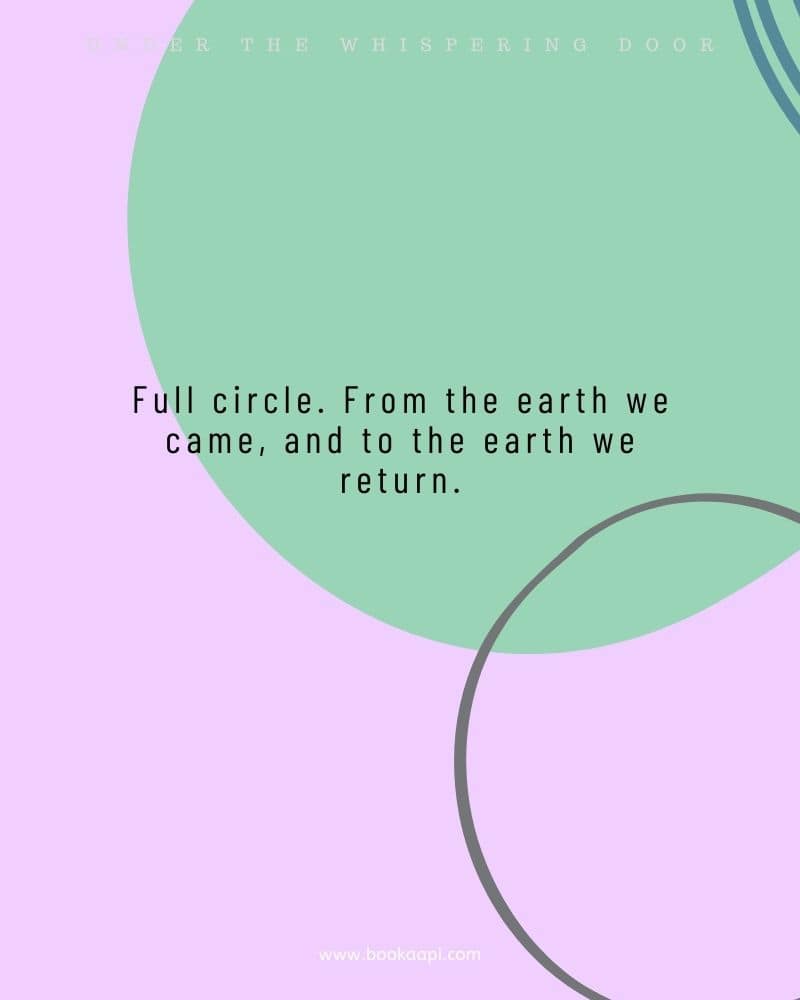 Best Under the Whispering Door Quotes

Do you like these book quotes from the Under the Whispering Door. Which one is your favorite?