You must have read Kaifi Azmi shayari, here and there. Or listen to his songs.

Kaifi Azmi is India’s known lyricists. Kaifi Azmi is responsible for bringing the Urdu poetry to motion pictures. He made it popular in movies.

Kaifi Azmi poetry is widely popular in India and other Urdu speaking countries.

Who is Kaifi Azmi?

Kaifi Azmi was born into a Shia family in Azamgarh, UP. Born on 14 January 1919, he started writing at the age of 11.

Funny story about his writing:

When he wrote the Ghazal at that age, someone asked him to read the complete Ghazal in a Mushaira. As Mushairas were a pretty common event in those days, so it was not hard.

He presented his Ghazal. And everyone liked it.

Then his frother denied it. His father was surprised and gave him the challenge to prove that he can write poetry.

He gave him couplet and told him to follow the same rhythm and prose to complete the ghazal. And he did.

Kaifi Azmi has the talent of poetry from the beginning. 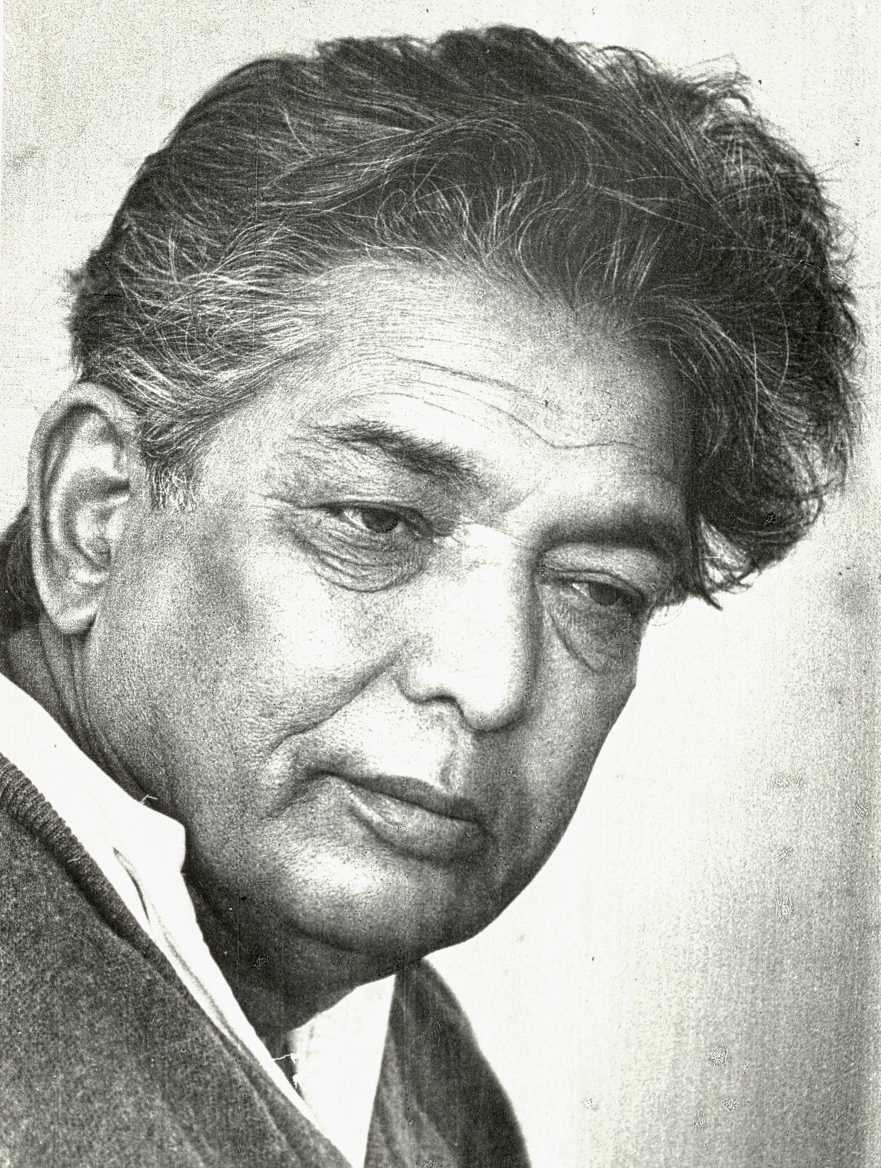 Kaifi Azmi left his study of Persian and Urdu. He became the member of the Marxist party and started supporting the communism.

Also, he was winning the awards and becoming a great name in Urdu Poetry. Shayari of Kaifi Azmi was getting famous.

That success made him the leader of Progressive Writer’s Movement of India.

More about him later, enjoy his poetry right now: 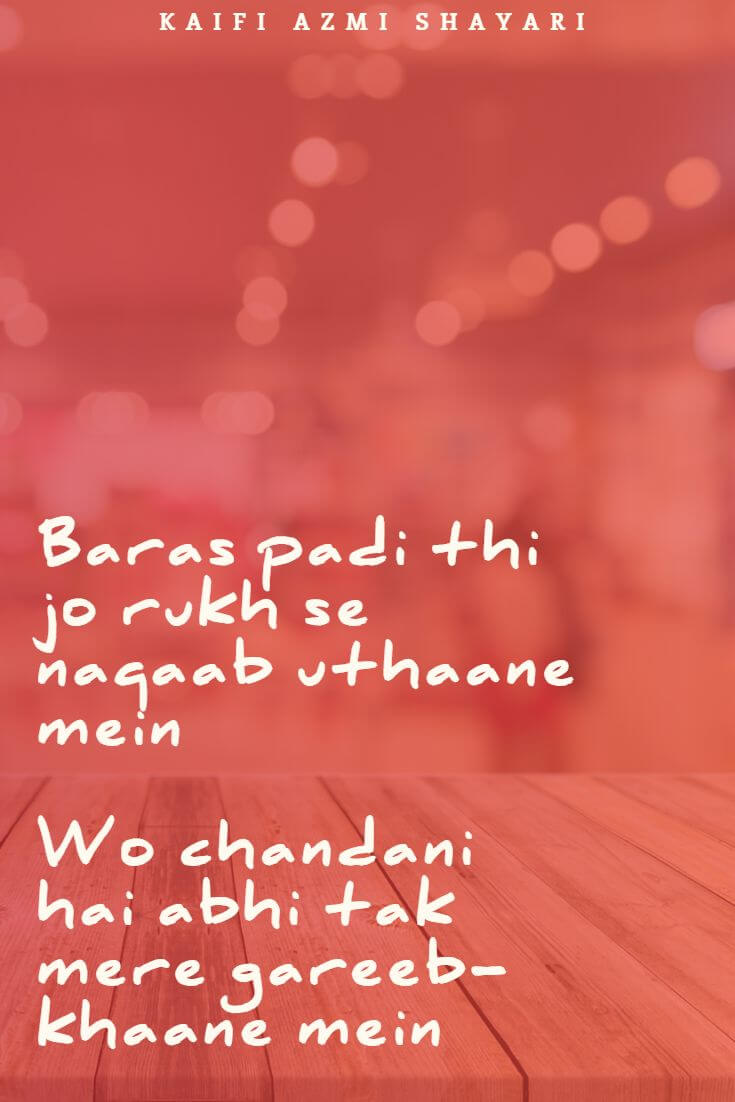 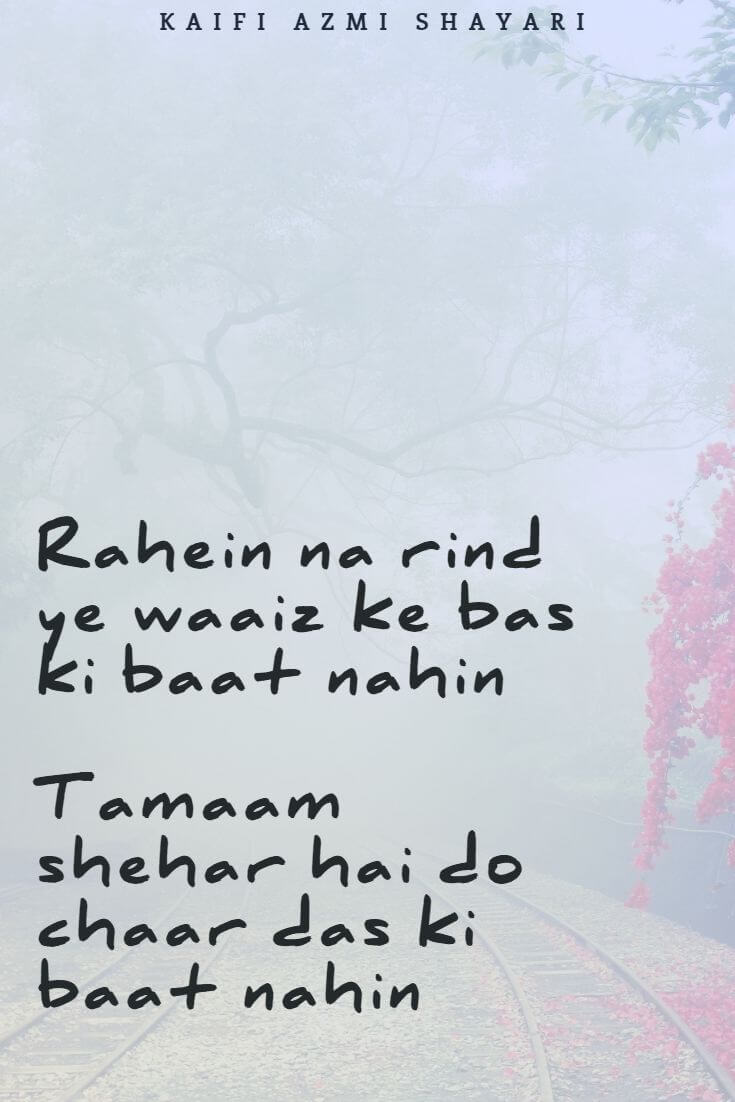 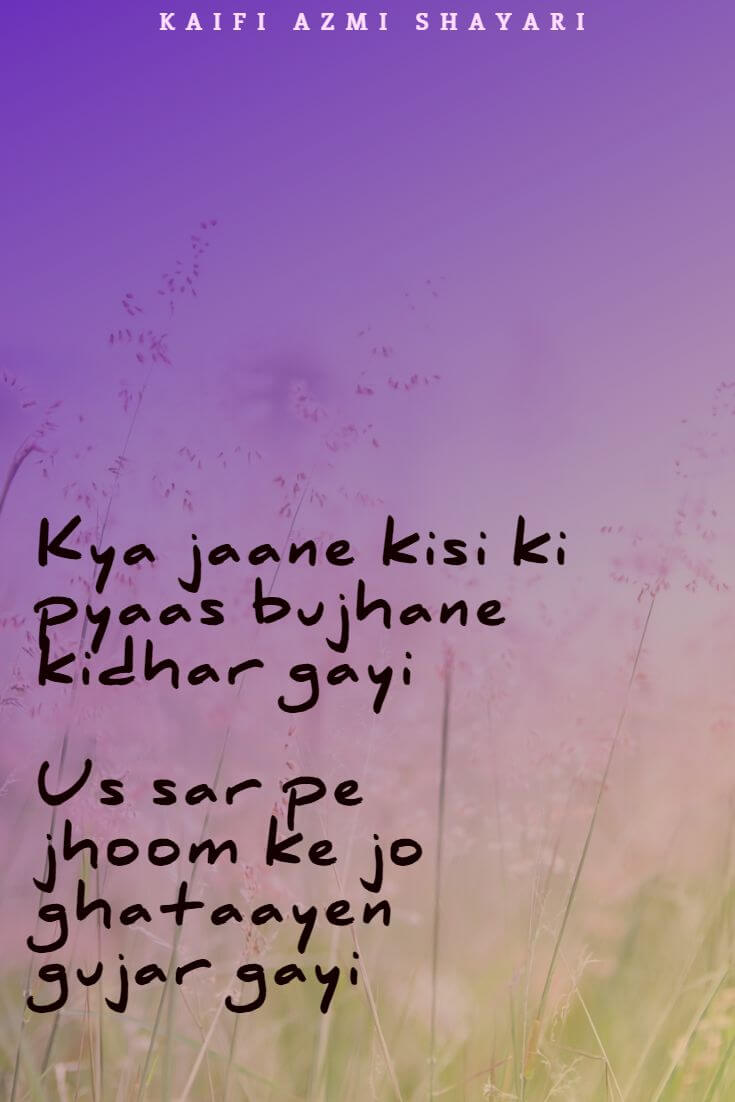 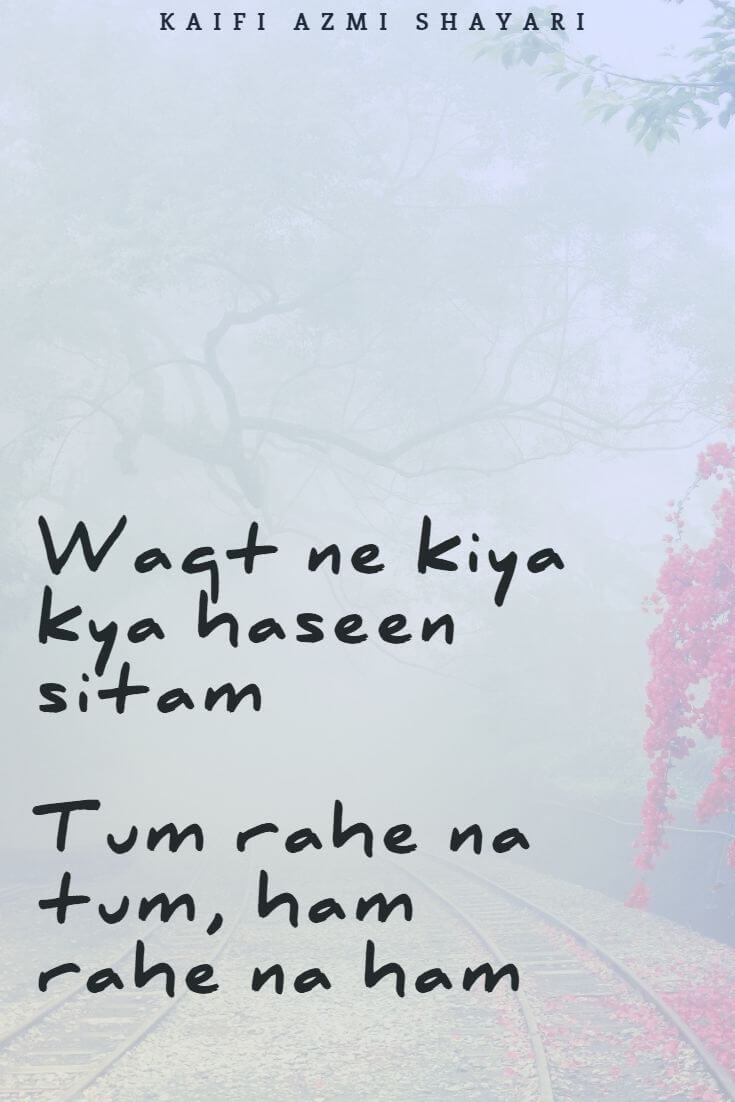 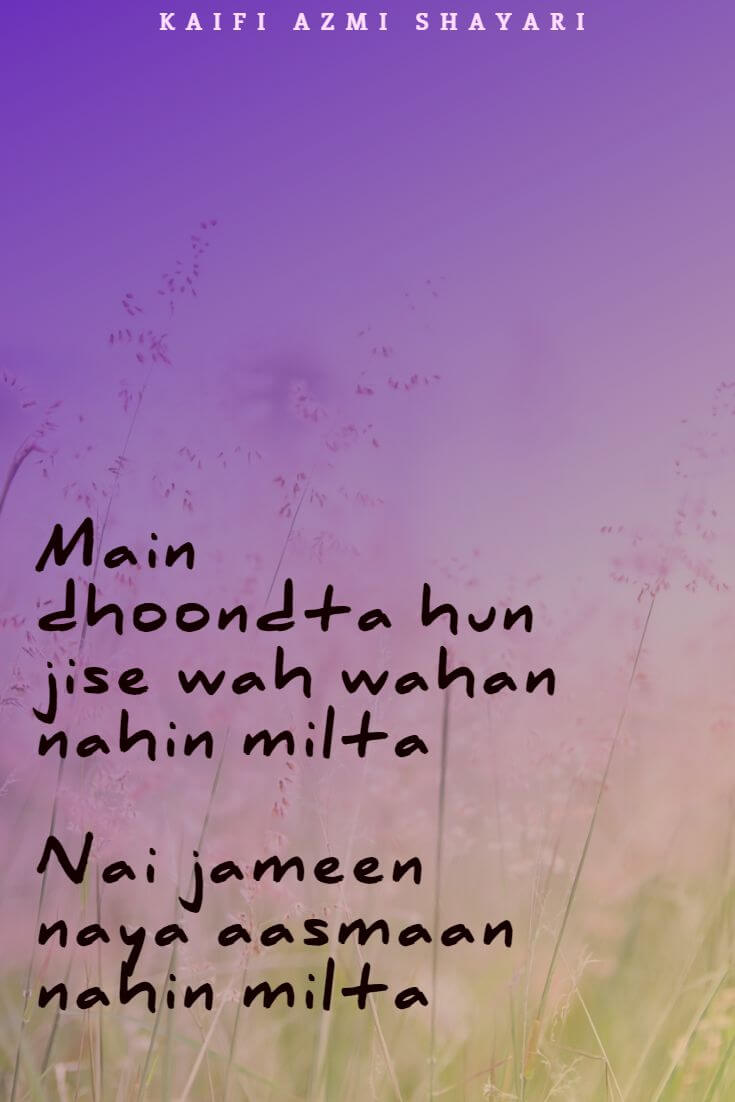 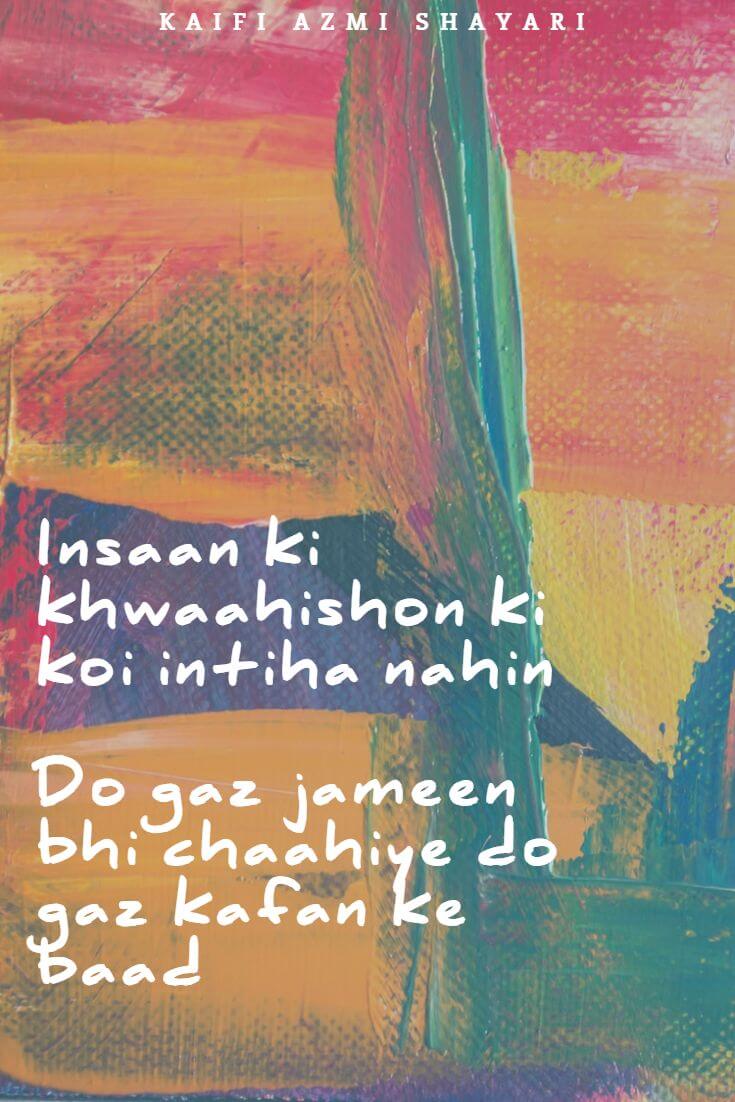 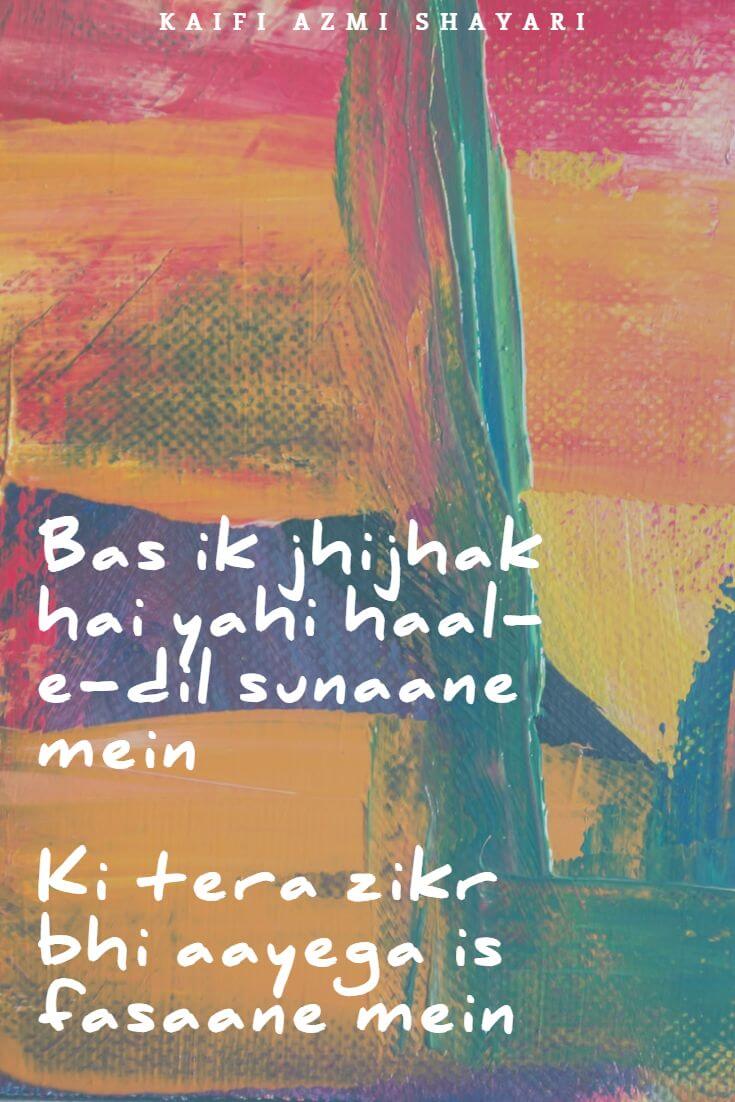 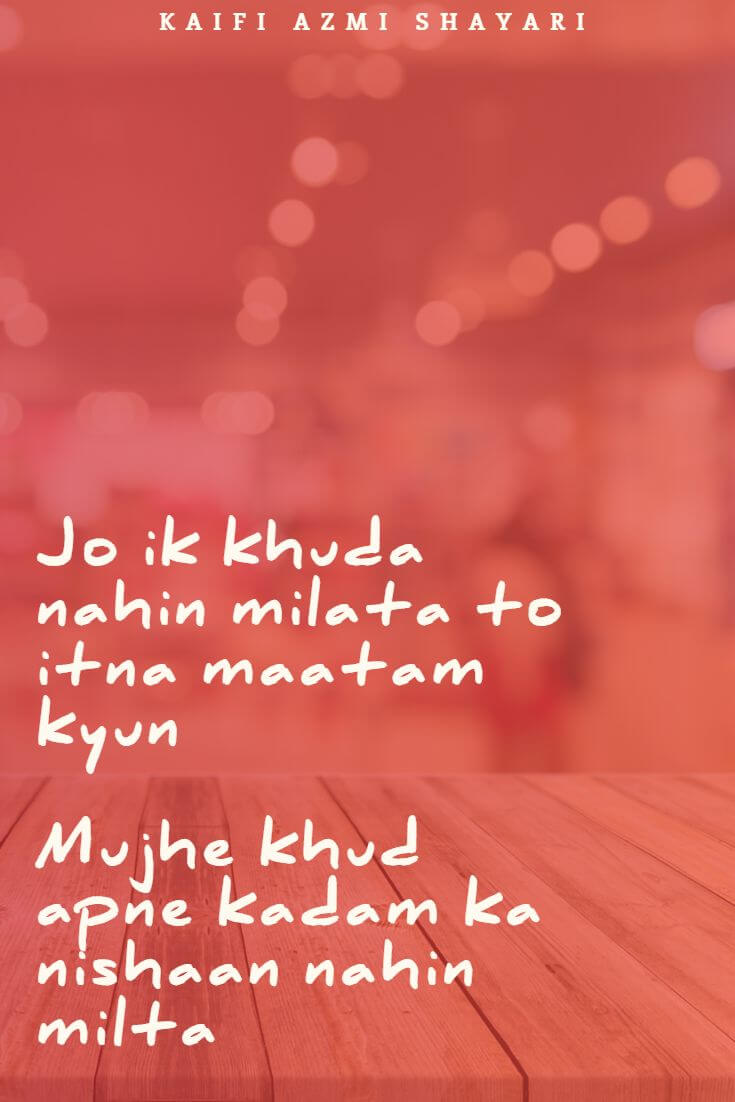 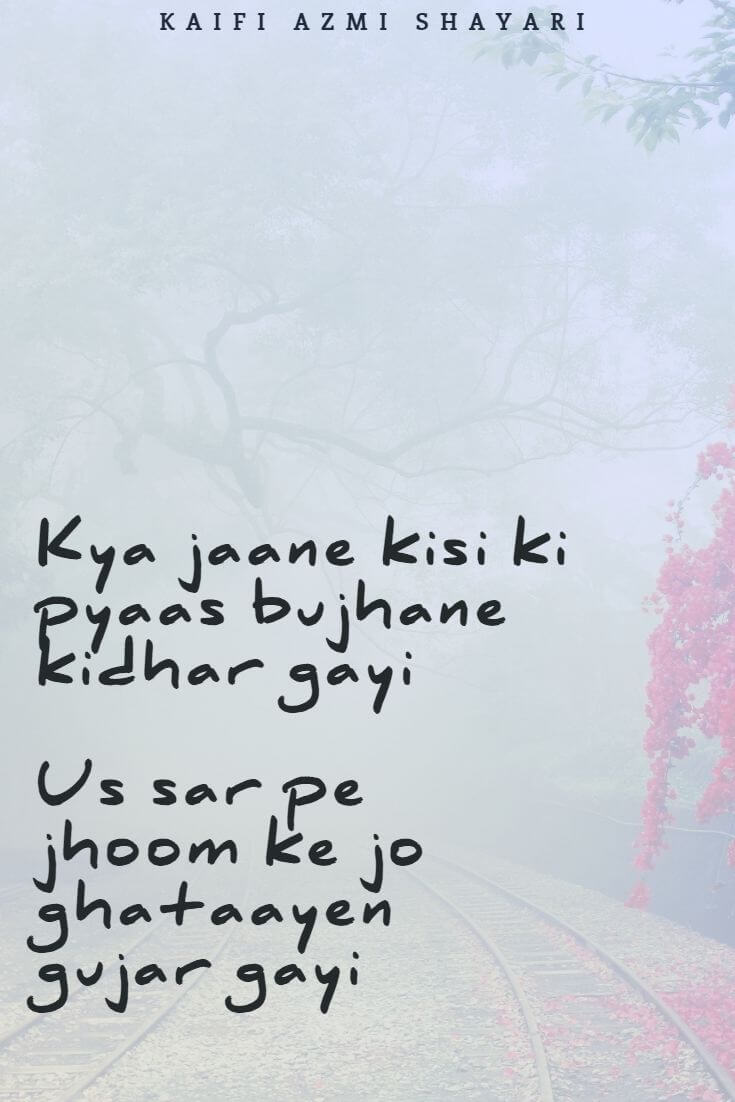 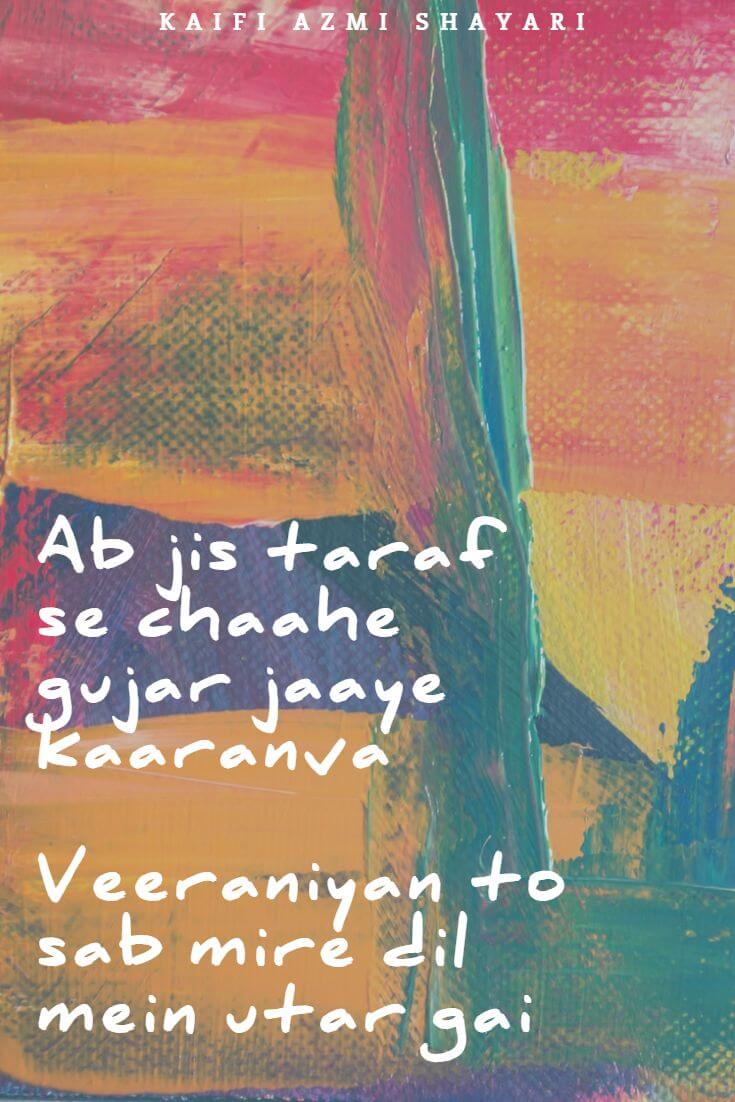 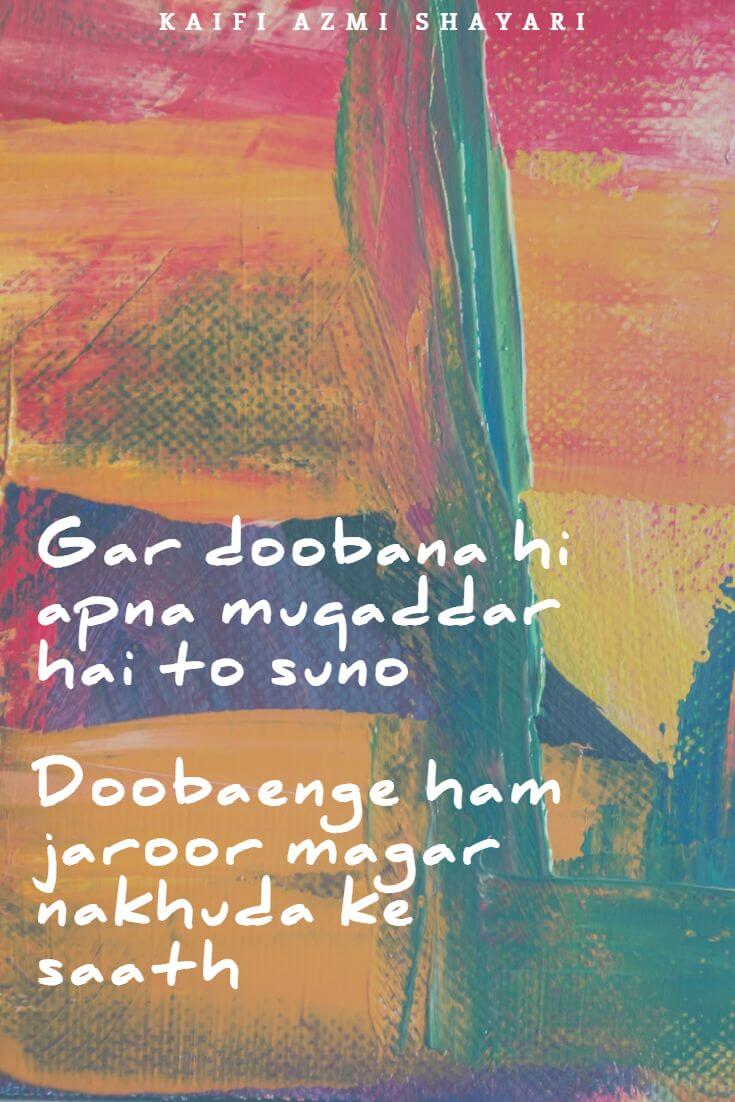 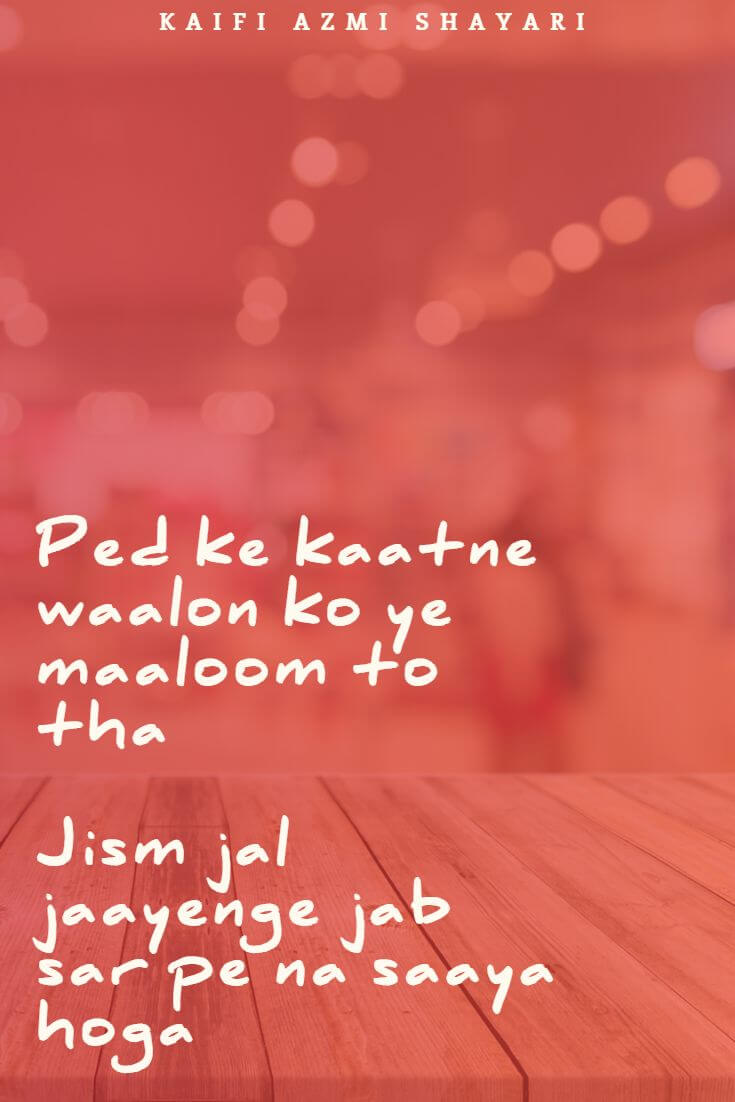 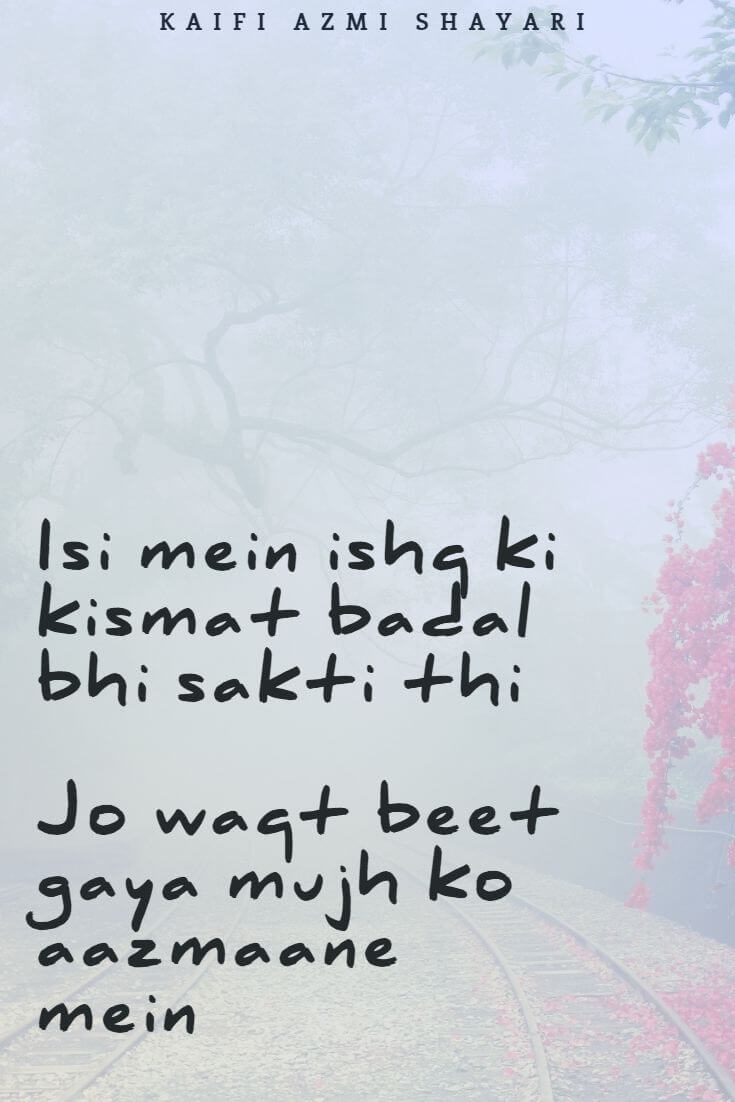 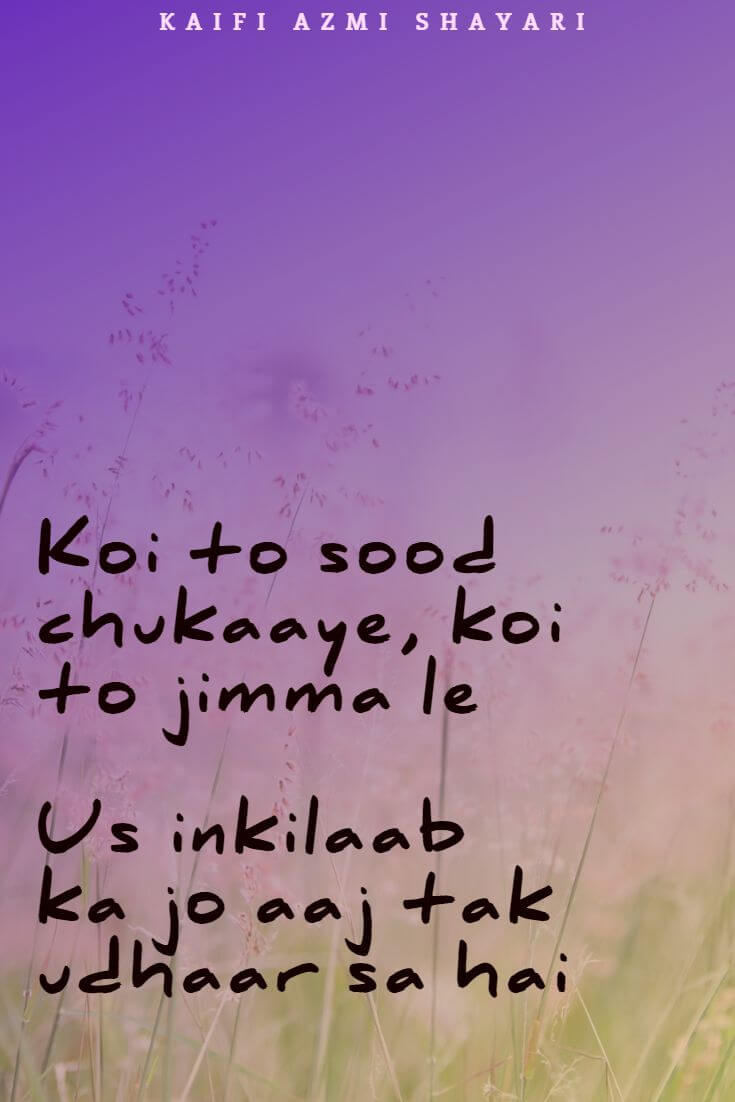 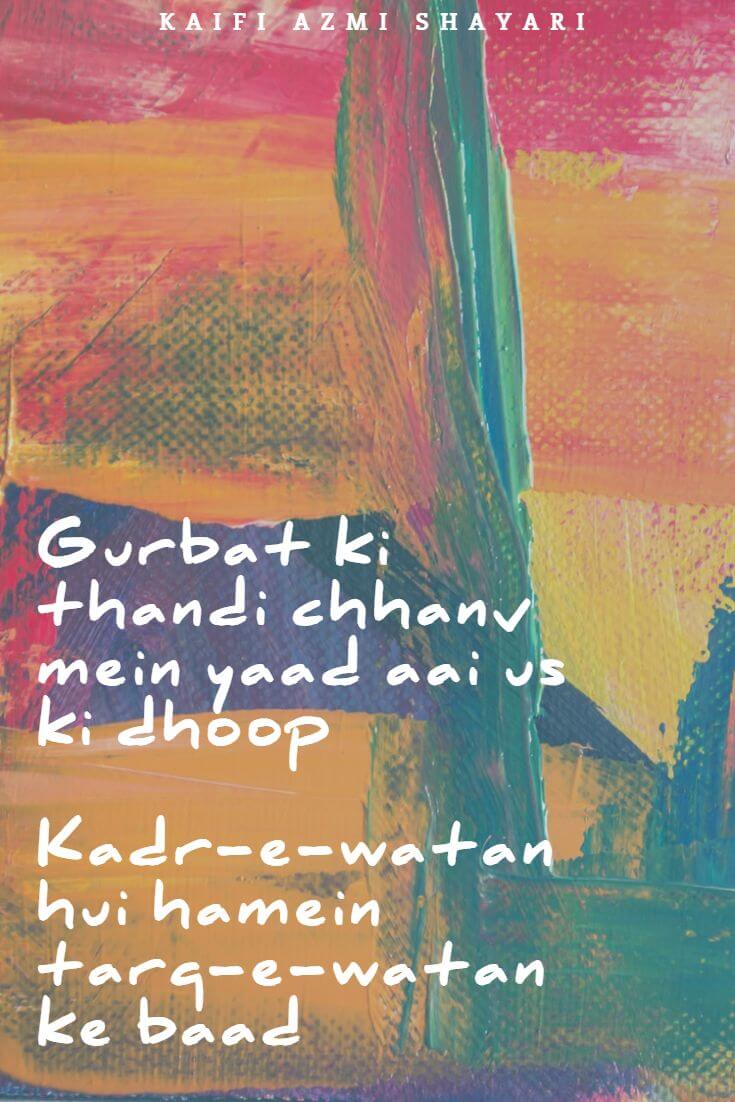 His father was Zamindar.

He tied the knot with Shaukat Azmi. She was an actress.

They had two kids. Shabana Azmi and Baba Azmi.

Shabana Azmi is a popular Bollywood actress. Baba Azmi is a cinematographer. He married to Tanvi Azmi.

He has won many awards. Big ones are:

Kaifi Azmi is the gem India had.

The Urdu poetry fans are thankful to Kaifi Ami Shayari, as it is always nice to read Shayari by Kaifi Azmi.

Tell me your favorite Kaifi Azmi Shayari in comments.

And learn more about Kaifi Azmi on his official site. 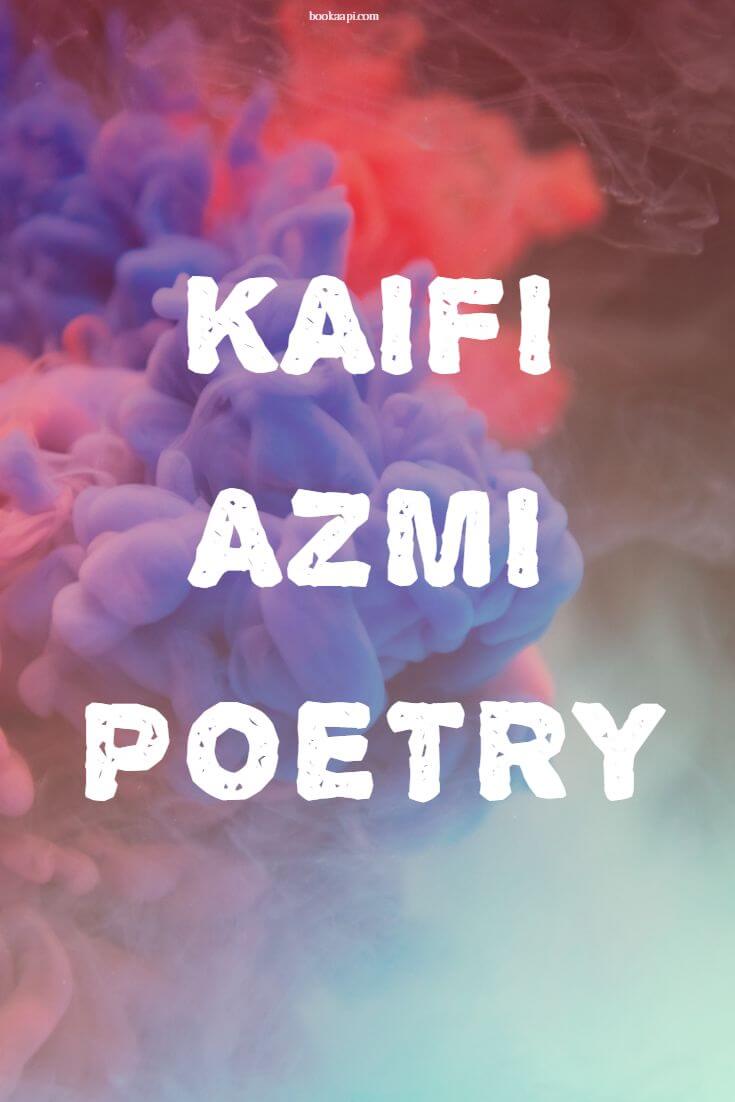