Derrick McCartney was born in El Paso, Texas and grew up in Tennessee before moving to the Washington, DC area.

Despite a degree in Soviet and East European studies, he made a name for himself as an expert on North Korea. After a stint in the US Government, he has spent most of his career in defense think tanks. He has published several books and articles on international security affairs under his real name. McMinnville is his first work of fiction.

Note from Author: I am using a pseudonym and not showing my picture because I am well known as an expert in another field and do not want that persona confused with my literary one.

You can find him at:

On the release of his new book, we covered an interview with Derrick McCartney.

Thanks to him for answering these questions.

What is this book about?

Some of the best science fiction and paranormal mysteries are ones that are firmly rooted in the normal, everyday lives of the character(s); not in another world or sometime in the distant future, but in the average neighborhoods of planet earth. The otherworldly character of the story slowly emerges as it would in real life, creeping into the consciousness as opposed to a great reveal.

The novel’s title comes from a small town in Oregon where two iconic photographs of a “flying saucer” were taken by a farmer and his wife on the evening of May 11, 1950 (you can look up the photos online).

The story focuses on a retired detective (Ray Baker) and his quest sixty years later to pin down the legitimacy of those two photographs: were they a clever hoax or pictures of a truly strange flying craft. His investigation takes him across the country and back as he digs through musty archives and interviews retired government insiders, scientists, and intelligence operatives.

As his investigation into the cold case unfolds, he comes across another mystery that took place on the same day just a few miles from where the photos were taken. This mystery borders on the unbelievable and if true rewrites human history and basic science as we know it. The closer he gets to solving this second mystery, the more he becomes ensnared in a phenomenon over which he has no control. 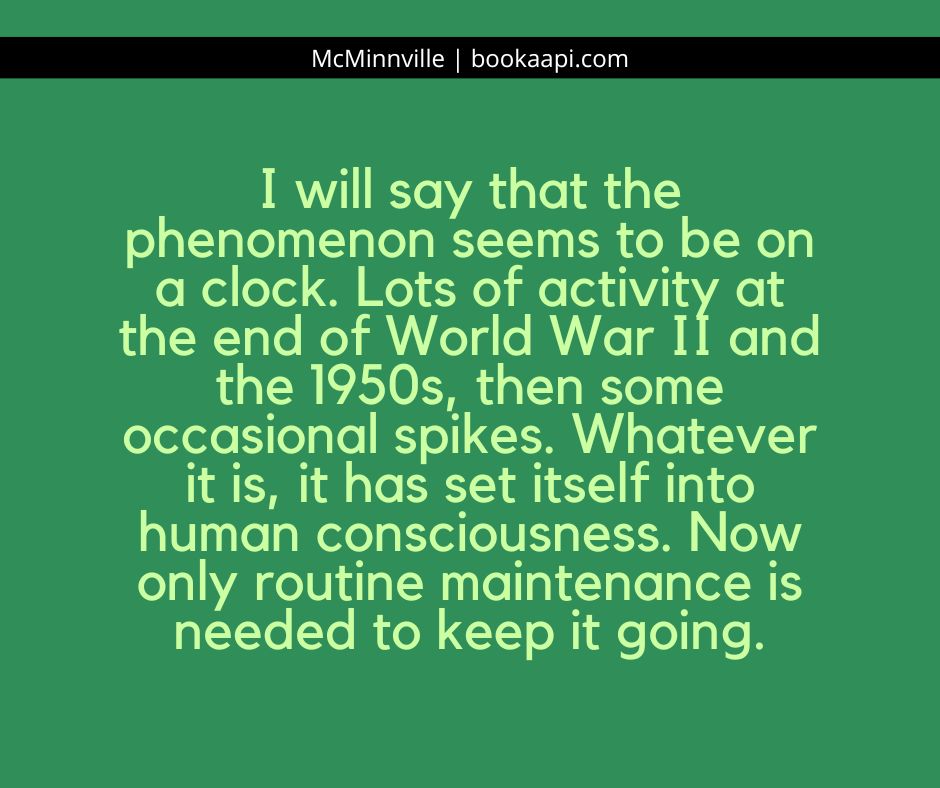 What inspired this book?

I have always had a fascination with the UFO/UAP phenomenon. It has a history behind it that is not well known, especially how the US government handled the spate of sightings in the late 1940s and early 1950s. During this time, the famous Trent photographs were taken.

This novel fictionalizes that event. For seventy years, skeptics and believers have debated these two photographs. They have never been proven or disproven. McMinnville asks the question, “What if something else happened that day (May 11, 1950) that would have tipped the scales?” From there, I constructed a subplot about an abduction that leads the main character down a rabbit hole.

When did you first realize you wanted to be a writer?

I began writing a journal when I was in high school and made my first attempt at a novel in my early twenties. The novel never got off the ground. Over the decades, I turned to nonfiction and wrote four books on North Korea and the Kim family.

During COVID, I returned to fiction and wrote my first novel (McMinnville) in about six months. It was published this May. Since then, I have written three other novels and am working on my fifth. It is my hope to publish at least one book each year for the next few years.

How long does it take you to write a book?

I wrote McMinnville in about six months. I had written the first thirty pages a few years ago, but began writing in earnest in May 2020 and finished in December.

Readers should read this book for?

First, I think it is a good story. If you like a cold case mystery with a paranormal twist, this might be the book for you. Second, this might be a good book for new authors who are interested in different ways of telling of a story. I have worked hard on the character development and pacing in this book. It has a sweeping feel, covering sixty years.

I have experimented with some writing techniques to give the reader the passage of time, including changing dialogue and a streaming of consciousness chapter that draws out a particular theme from 1950 to 2012 (the time most of the novel is set in).

When did you write your first book and how old were you?

I wrote my first nonfiction book when I was thirty-five.

What do you like to do when you’re not writing?

I have a full-time job as a research manager in a defense think tank. I spend most of my time studying foreign adversaries. In my spare time, I like to read and play board games.

What first attracts your Hero to the Heroine and vice versa?

I have written one romance novel and am currently writing my second. Also, McMinnville is a trilogy, which has a romantic subplot. I have tended to focus on unconventional relationships in terms of age and culture.

I am drawn to looking at the generational gap and cross cultural romances since they allow me to examine communication and how people with different life touchstones can find common ground. When you start from a point where the characters should never meet or even be interested in one another and then they fall for each other, the journey can be quite satisfying.

How did you ‘get to know’ your main characters? Did they ever surprise you?

My male characters always have a bit of me in them at their core. Their boundaries are motivations are very familiar to me. I layer on characteristics is know in other people, have read about, or seen in movies. The protagonist in McMinnville, Ray Baker, has a lot of me in the character combined with several real life detectives I know.

If I had to describe him, I would say he has the congeniality of Jimmy Stewart and the smarts and perception of Columbo. As for the lead female characters, I base them on women I have known, including my wife, past girlfriends, and friends. I also watch a lot of vloggers, read a lot of blogs, and talk to my younger colleagues to capture the younger generation since most of the books I write these days are populated with characters much younger than me.

What was your favorite scene to write?

My favorite scene in McMinnville is one between Ray Baker and Zacharias Bennett, a brilliant theoretical physicist. The scene is used to ground the novel in real, cutting edge science. The interview took me months to research, including reading papers in science journals on relativity and quantum mechanics and talking with theoretical physicists.

What was the most difficult scene to write?

McMinnville has a love scene between the protagonist and his dead wife. It is in his head, of course, but striking the right balance of tenderness and otherworldliness was difficult. I shifted from the past tense to the present tense to convey the dream state.

Would you say this book showcases your writing style or is it a departure for you?

I think it conveys my writing style. I try to keep my writing simple, straight forward, and balanced, not over the top or understated. I focus on capturing dialogue and this novel allowed me to do that since it has several very long passages of dialogue. Where I have departed from my normal writing style is in my recently completed dystopian novel (Writer’s Block) about a man trapped alone in New York City. It is written in first person instead of third person, more introspective.

What do you want people to take away from reading this book?

his is a book that suggests that reality is not what it appears to be. Never take things at face value. Always question, yet don’t get sucked down the rabbit hole of conspiracy because there are more things in heaven and Earth than are dreamt of in our philosophy.

What are you currently working on? What other releases do you have planned?

Besides McMinnville, I have full drafts of three other novels and am working on a fifth. Next year, I hope to publish Living in Wonderland, the sequel to McMinnville. In 2024, I will either publish Come Together, the third novel in the trilogy, or Writer’s Block. After that I will publish Neighbors, a romance set in Los Angeles. Right now, I am working on a second romance novel that explores the difficulties the Gen Z and Millennial generations face when it comes to finding love and relationships.

As a child, what did you want to do when you grew up?

I wanted to work in a think tank since I was a kid in high school. I once saw an episode of Columbo where the villain worked in a think tank. From what I could tell, he sat around thinking big thoughts yet he made a lot of money, drove a hot car, and had a pretty girlfriend. I was sold.

Where you can buy the book?

You can buy the book from Amazon. 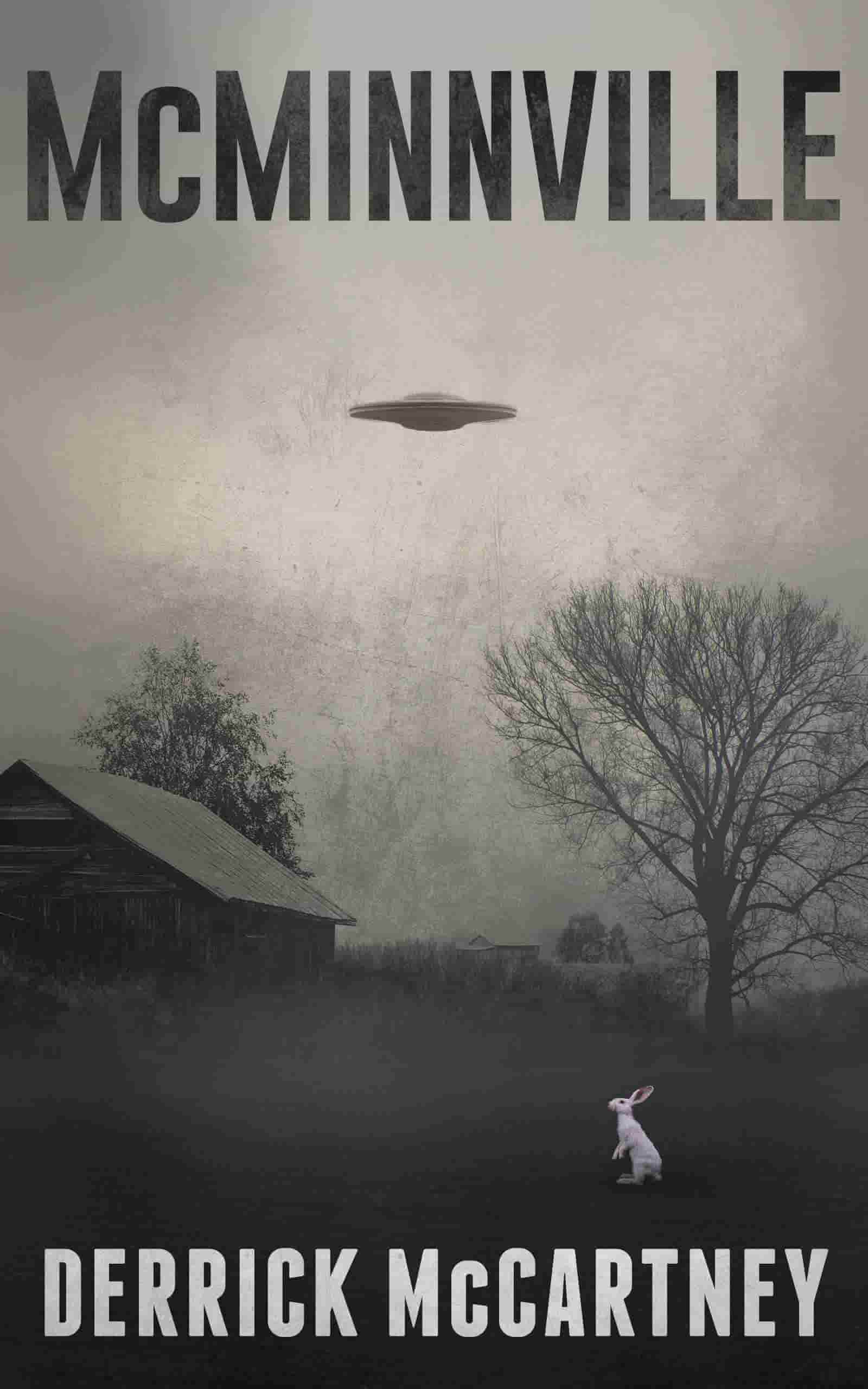