You can read my Book Review Policy and see yourself.

But I end up reading this because NetGalley does not tell me that it is a Christian Book.

So, what I did, I skipped all the Pastor and Ethen conversation chapter from the book. Only two chapters.

Well, Thing I’d Rather Do than Die will release in September this year.

This is not Hurley Deriso’s first book. She has written All the Wrong Chords, Do Over, The Right Under Club and more books.

Frankly speaking, there was no newness in the book.

The old tired formula of a Football Player and Invisible Girl love story, with the sad backstory of both characters.

This formula works in y/a but, you need to write a catchy story with a tongue in cheek dialogues.

With quotes that I can post on Tumblr. But the book lacks it.

The title, “Things I’d Rather Do Than Die” is misleading.

I read it because of the title, but the book, the story, character, and plot, they all are not about this title.

The story of Things I’d Rather Do Than Die

A girl who lives in her own bubble only has one friend. She is different from everyone because she has a different skin colour, not white, nor black.

Jade is a multiracial girl of African, European, and Cherokee descent with a Filipina stepmother in a blended Catholic, Protestant, and agnostic family.

They both find each other unbearable, but yet attractive.  🙄

Jade works at a gym, and Ethan comes at the last minute before closing, to do exercise.

And with the forced situation, they meet and spend some time alone in a locked room, and tell each other their secrets in a 5 Min conversations.

They even tell what they think about each other and their friends.

Too much trust in few pages.

Then you can guess the story.

They start falling in love, but Ethan has a girlfriend.

Jade try to push away, but that never happens in a book.

When the story starts to drag, Jade start dating another character.

So, Ethan feels jealous and realise how much he loves her.

He finally broke up and things went smooth.

There were other things too.

Girl’s father has some killing disease, and everyone tells her sorry.

Boy’s father is Alcoholic, and the only character I like in the book.

Girl’s mother, was she in the story or not?

She was only through the messages.

I already told you the alcoholic father was my favourite, the reason is whenever he was on the pages, there was the excitement. The thrill, that something going to happen.

Other than him, no character brings that action.

there is not much building of other characters, except for the main one.

The writer touches the other character lives from the tangent, but stay focused on the real one. Good thing.

The problem is the main characters are not carved properly.

“My father is an alcoholic.”

“My father is dying.”

There was not much time given to both characters to build trust between them.

Some hour in a room and they know each other a lot.

The language of the Book

It is simple. Yes.

It is the reason I finish the book.

Because It was easy to read, so I finished it in 5 hours.

If I had the chance to change the ending.

Ethan’s girlfriend does suicide, because of the breakup depression.

The last chapter will be from her, a letter sent to Jade. Telling her that all of it is not her fault, but she is weak and she can’t digest rejection.

Finally Do I recommend this Book?

Read this book if you have nothing special to read. Or you are on a 5-Hour flight, and you like to read a light read.

It will pass your time, and in the end, it will not affect you in any way.

You will be just what you are.

Things I'd Rather Do Than Die 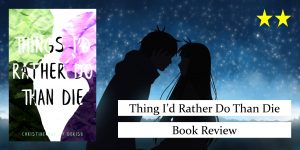 Things I'd Rather do than die by Christine Hurley Deriso is simple school romance, that talks about finding love at unexpected place.