Often in the book, the profession of the protagonist heavily influence the motivation and character of him. I agree, as our thought process, attitude and personality is shaped by the elements of the work we are doing for a living.

I guess we think in a way we work.

It was, I think, therefore I am but what I am, depends on the work I do, and how I think could be determined by the work I do.

An engineer and doctor do not think the same way. As the engineer seeks efficiency and could be creative with his experiments. In contrast, the Doctor has to ensure safety and seek the repetitive method that saves the patient’s life.

When the protagonist is a philosopher, and review paper (which means she has to read lots of different ideas), one cannot blame her for analyzing everything in terms of philosophy.

I enjoy those bits though.

You have to understand that The Sunday Philosophy Club is not an action crime thriller type book, but crime is behind the scene. At the forefront are the ideas author-protagonist shares, and the question it raises.

Isabel Dalhousie is an independent lady, and certainly not a detective. But the things we do for closure, I can understand.

When she witnesses a boy’s fall from the god, she has to investigate further to find some type of answer for herself. A young man dying is not something Isabel shrug off.

She has a niece, Cat, self-sufficient, and running a restaurant, I guess. Then, Jamie is in love with Cat, but Cat has already moved on to the next, while Jamie is still waiting.

Though Jamie sounds like a loser, he might be, but the protagonist will defend him at every page.

The only solid character in The Sunday Philosophy Club is the housemaid. She has concrete opinions, and they are influenced by religion and traditional values.

The Class Comparison of Ideas

Isabel is shown from the upper class, and she knows too much, which creates doubts and questions. While Grace, the maid does not know much. But she believes firmly in what she knows.

The distinction is made through question and answers. Grace as a working woman and with poor family does not have time to think or doubt the universe.

Isabel and other wealthy people have time to ponder over such a thing.

Here, the writer or I am not questioning the thinking capability of the working class. It’s just, and they don’t have time to think. They are busy working for the next meal.

But then there is Cat. She is as self-sufficient as Isabel, and still free of any doubt.

So is it class, or some people are just the way they are. Few people questions and others put their faith in something.

The idea of philosophical suicide has been explored by Albert Camus in The Myth of Sisyphus. But that is for another time.

What is a Lie?

Then another question that the book rise is: What is a Lie?

As the simple answer could be: Incorrect facts are lying, but we are already beyond simplicity.

When is it right to tell the truth, and how many lies you can serve with the truth?

Let’s say, your girlfriend or boyfriend asks you how he/she looking in a particular T-shirt. Would you tell the truth it does not look good, if true, or you add a pinch of lie to it like the t-shirt is looking good; however, it does not go with your shoes/jeans.

Well here the lie is still intact, but naked truth could harm sometime.

My example is horrible, but the gist is, should you lie to the people who trust if the truth means they will leave you.

Isabel has to tackle such a dilemma whether to talk to the reporter about the death, inform her niece about her unfaithful boyfriend (when she found it through the illegitimate way), and what to do with the truth end.

Similarly, the reader can judge Isabel for her reasons and decisions, but we have to answer what we would have done at the place.

It is a well-explored niche. But here the critical thing is Grace, who is so sure of her opinions, always judge the people correctly.

While Isabel, after all the reasoning, and investigations, ends with the up wrong conclusion.

A person can recognize the qualities of another person in the few glances, while the other can’t even after spending lots of time with them.

How does this thing work?

One can say a person living in the book fails to converge with the reality, while the one living, in reality, has power hand in streets.

Isabel investigates the fall of the boy as much as possible. She finds about insider trading, and how a person who knows the market’s information can manipulate the shares.

She creates all this plot in her mind, with the motive, planning, and even an accused of the crime. According to her, the reason of the murder is some deep corporate conspiracy, involving money, and assets.

The boy died was only a small pawn, in the game of money.

But the truth is more simple and ironic. The motives are more in-depth and understandable.

The plot and ideas of Isabel about the death of the boy were complicated, as her thoughts. Though all of it was false in the end, and the truth is that the boy was not the pawn but the protagonist in his death.

Do I recommend The Sunday Philosophy Club?

Looking for a fast track crime thriller, then no. Okay with a protagonist that goes into the circle of thought in nearly 50% of the book, then yes.

The moral conflict in the book makes it an excellent book for discussing in reading clubs.

So yes. I suggest The Sunday Philosophy Club. 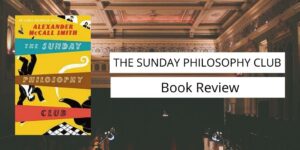 The Sunday Philosophy Club is a story of a an editor, who witness a death of young man. Trying to find herself a closure, she discovers truth.