The Stars Shine Down by Sidney Sheldon | Book Review Builder

So I went to Bihar for the first time, and the book I took with me was The Stars Shine Down by Sidney Sheldon.

Reason: Because I know Sidney Sheldon does not bore. There is a hook on every chapter, and you keep reading the book.

I was right and wrong.

My experience is good with Sidney Sheldon. But The Stars Shine Down downright disappointed me in terms of story, but I was hooked.

I liked Master of the Game. There are three generations in that book, and I liked it. Ofcourse, I expect the same from Sidney, and other books I read have done it.

But somehow, The Stars Shine Down has a story of one female. There is some familial history of girl’s father, but that is all.

Sidney usually goes deep into the family saga. Due to that, the story gets rich, and you see the daughter taking the father’s trait.

In this way, the book feels shallow.

By the way, this was my first thought after completing the book. Like something is missing. A key element in the story is absent.

And then I realize – the story is absent. There is no negative character or opposition of our heroine.

Everyone is helping her, and everything goes as she likes.

The absence of resistance makes the story less attractive.

The ride of the woman taking over the man profession and killing in it is thrilling. Kudos to the experienced writing of Sidney; he does not make the book boring so I stop reading. But again, the reading experience is not good.

But how did he miss putting an antagonist? 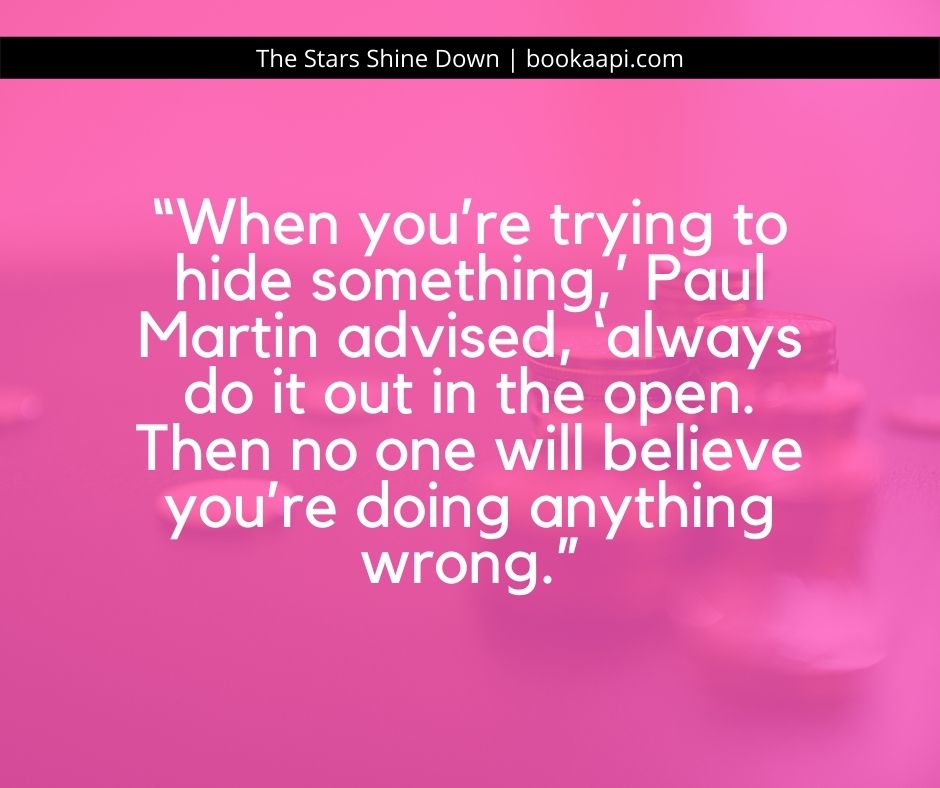 The female is at the mercy of 50-year-old man. So, she loves him, care about him and seduce him. Similarly to Samwell Tarly – a fat ugly man getting a girl from young girl in Game of Thrones 9 (I can see what Martin does).


When I was reading the book, I thought this is what Sidney Sheldon may fantasize about.

A young, ambitious girl is seducing the old man ( old man have high moral ground and he totally is not taking the advantage of situation bro). He is helping her in building her career. But then she finds love, and he destroys her, but he saves her in the end because he loves her (still have high moral ground – like you hurt me, but I protect you bro).

The focus is not the young girl here – but the old man.

He is displayed as an influential person, wise man that plans things. The girl though successful and cunning where convenient, but actually stupid.

The old man was the lead character in the book, and the girl was just there to show that you don’t mend with influential old people, or your achievements will go to waste, and you don’t matter, and everything you have done, you have no networking, and all that matters is that being an old man.

Maybe I am overthinking.

As I said, the story lacks a central identity.

If you ask me, what is the story, I would not be able to say it clearly.

Like there is this girl who wants to make a building, and then she does, and then there is a minor issue (that comes with every person in development), and then she again starts making buildings.

Yes, that is what it was.

A blog novel is written from the girl’s perspective.

The story is also broken into parts. Like there is some kind of modularization going on.

it’s been five days since reading the book, and I don’t even know the girl’s name.

However, I often forget names. That’s why you will find in my reviews I don’t take a character’s name.

Such type of reading becomes difficult, but I can’t control it.

To think about it now, I have stopped seeing the name for a long time, in books and movies. They come out as themself.

But the thing is, the name does not do crap. Characters are defined by their actions. So I am kind of right by judging their personalities and bracketing as per their action and reactions.

But whatever – the point was the book is empty, and I don’t think there is much to write about it on.

One line stick with me. It goes like this:

And that’s so correct. But I knew it already. Read somewhere.

But again, this is so true.

We see the government forgiving the loans all around us because they just borrowed too much money, and now they can’t give, and the bank will go bankrupt, so they forgive the loan.

Sad, but people who don’t have money have to pay each penny back.

But I don’t know how it works; I am just guesstimating. I am no accountant.

I am a marketing manager (to say). It is a post that lots of people will like, but it is not charming. It is boring.

Maybe I should have become a firefighter. But whatever.

Do I recommend The Stars Shine Down?

There are better books by Sidney Sheldon. Pick them, not this.

Go with Master of the game – I liked that one.

The Stars Shine Down by Sidney Sheldon | Book Review Builder 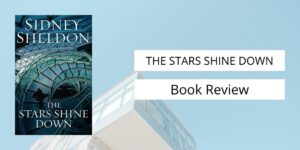 The Stars Shine Down by Sidney Sheldon is the story of girl who become the best developer in the some city. That's the story.