The Rude Tenderness of Our Hearts | Saket Suryesh | Book Review

To talk of contemporary short story writers, I have not read many.

I read the White Marble Burzi and Uff Yeh Emotion. Also Roald Dahl and other writers I do not remember.

The Rude Tenderness of Our Hearts by Saket Suryesh is kind of between the both. It is much better than the Uff Yeh Emotion, while it does not reach the maturity level of White Marble Burzi.

The Rude Tenderness of Our Hearts is a collection of eight short stories written by Saket Suryesh.

All the stories are different from each other yet they all are rubies that belong to the same necklace.

Stories of the Rude Tenderness of our Hearts

I always think short stories main objective is not to tell a story.

Telling a story is just an excuse, by a short story, a writer usually put his thoughts more harshly. Novels do not give that freedom, or I should say that pressure to use fewer words, that made writer come to the point as fast as he can.

Or sometimes at the end of the story. Sometimes the whole story is his point.

But I believe that short stories are more daring than novels.

In these eight stories, I, more than once observed that writer is upset of political impotency of India.

I mean we all hate this system, but we do not care much about it. I see that writer does not hate it, he is actually angry about the fact that this countries politics is a whore.

After reading the book I checked his blog. I found out that the last story i.e. The Death of Soldier is inspired by a real event. Well, all stories are inspired by true events, but I think this story is not inspired but the writer tried to write what actually happen. Or he thinks so.

Love with Yale, the whole story looks a metaphor that says that if you love something too hard you can make it alive.

I have ideas and theories for other stories of the Rude tenderness of Our Hearts too… But NO.

I do not know why I get this type of ideas ?? 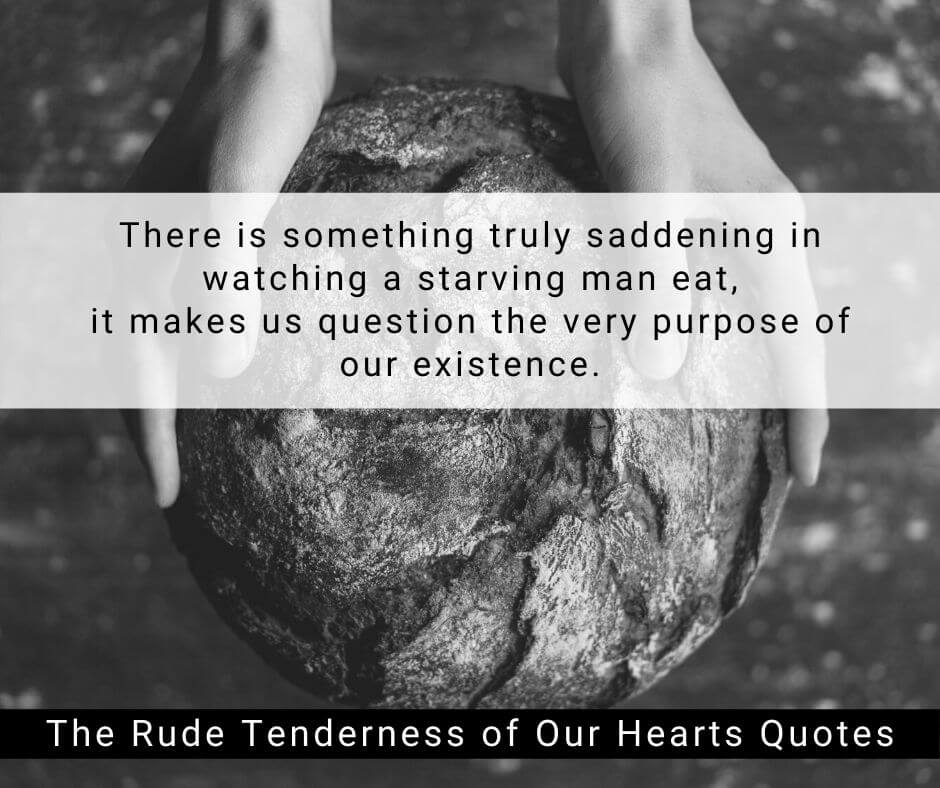 A Tale of a Story

To talk about the stories, the most important things lack in the short story was the story.

There was not enough story to say that this is a story. I mean, you put your philosophy and agendas in the story, not your story in between the philosophy.

The Death of Soldier is full of event. But the other stories does not have that content.

The content for the stories was not something I do not know or regularly encounter.

I see poor people every day and I sympathize with them up to a limit, I watch news of terrorist killing our soldier brothers too, I get upset too.

That’s why I did not understand the logic of writing them in a beautiful manner, in a way, in which they make us emotional. But still, they never question anything.

Of course people write about the issues of societies but the trick is to show them in the story through your character’s eyes, and not putting your views and then blending them to produce a story.

All the short stories have a thing common that I find. I might be wrong. But I observed that every story is a weaving around an event or a character.

They are not in one direction but a globe, that makes the stories dimensional but at the cost of its incisiveness.

The writing is consistent.

Thank god the level does not decrease with each story. Writing has the power to hook you in the story.

You might predict the story at the first page, but you still read it just to read what has written.

Writing is a success. I could say that when I compare it to other story books I have read.

And for this reason, I can say that the The Rude Tenderness of Our Hearts is easily a readable one.

I recommend The Rude Tenderness of Our Hearts by Saket Suryesh.