First book of the year 2022. I can’t believe it took me two months to read a book.

But I am also reading another book — non-fiction.

I thought it would be amazing to read only non-fiction this year, but non-fiction is boring.

Non fiction is for lazy people who can’t sit to read the fiction around the fact and want summarize lesson.

Non fiction is for the people who highlight line in the book with yellow highlighter.

Non fiction is for the people who want a result without having to go through the process.

Non fiction is for the people who eat food without knowing the ingredients.

So I started rereading fiction and picked The Mistletoe Bride by Kate Mosse.

It is a horror story collection.

But my luck, this story collection is as boring as intelligent investor.

Imagine the horror! Because that’s what I did.

Never read a horror story that terrifies me. Except, of course, the Mara Dyer series. That series is creepy.

Well, between so much work, work, and work, I am glad to complete this book.

What’s The Mistletoe Bride is about?

As a horror story collection, it sucks. There was some twist in two or three stories, but the stories never took off.

Let’s see each story separately, though I don’t remember much. My memories are getting bad and bad day by day. I should consult a doctor.

Titular story and the first one as it is the best one. However, I liked The Ship of the Dead.

It is about a retelling of the tragic tale of the bride who accidentally locked herself in a chest. Then roam the castle in the dress of the bride.

Sad and tragic. Dying lonely, while around people who love you are searching for you.

Remind me of that man who got stuck in some cave while doing underground crawling.

The author says it’s about the doppelganger and wraith. But it feels more like a personality disorder.

Maybe mental illness is the real horror. I don’t remember much, but the end twist was that the person was talking to himself.

My second favourite story of the book. The grief makes people mad. Or insanely brave to do what they always wanted to do.

Walking around with the desire to be dead. Once they found their hit, they plunged into the chasm.

The character was planning to kill herself because of something that I can’t remember. The cause is trivial; the point is she wants to be dead. And she chooses a good place and a date.

The exciting part is that she died before she went to that place, maybe from an accident in the hurricane.

But the desire to kill yourself is red. Death cannot prevent suicide if one is sad.

So the spirit it is.

But then it opens another way to look at the story.

Suicide is not about killing your body. It includes killing your choices, hobbies, habits, and everything that makes you happy.

Some people kill everything they have before they kill their bodies. Gradual killing is painful, but after a certain point, it becomes monotonous, similar to hitting a part of your body with a stick continuously.

The girl’s body dies first, but the worldly desires later.

But who to say? 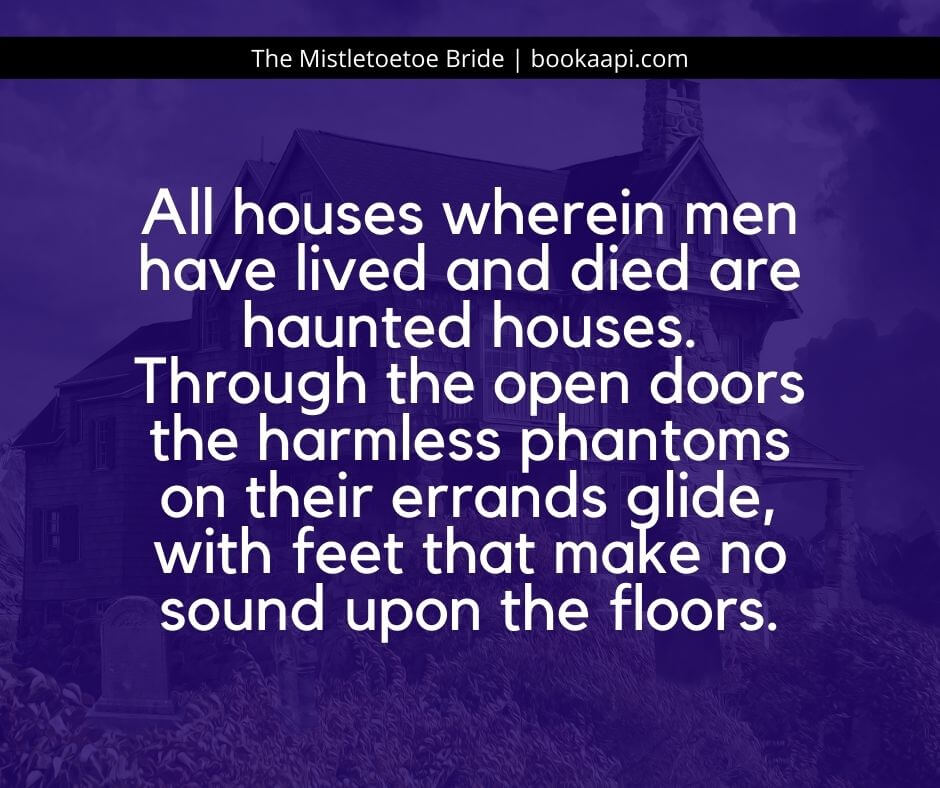 You always move around afraid of A, and you realize that you are an A.

How do you react to this?

The character’s reaction was meek and weak.

The House on the Hill

A great romantic story. Why is it in horror books?

Once I had nothing to read, I picked the Chicken Soup stories. And one of them was similar to The House on the Hill.

The husband’s ghost saves the wife’s life. It’s a tale told much time.

But still, The House on the Hill is interesting due to the depressed character. So often, the characters of such stories are annoying and super-active. There was a movie with Daenerys Targaryen and the Hero from Crazy Rich Asian.

The boy dies, and his heart is given to the girl, and the boy’s ghost helps the girl move on with her life.

Why the Yew Trees Live so Long?

Not a story, just an observation.

In India, we have Neem ka Ped.

Good story. But I am not sure how the man was blamed in this story.

If the girl loses her grip on her life, why does the boyfriend get blamed?

Why do stories blame the man for the depression of women?

The girl was sad, and by miracle in church, she was given some sense. So she left her boyfriend because leaving the boyfriend or husband is peak empowerment. The same goes for boys. Leaving their families is peak individuality.

Why can’t both exist?

The Ship of the Dead

One person is selected from the community to take the dead away.

A difficult job. The city boy is against it.

He enjoys the community’s hospitality, but he considers their methods archaic.

You have to read it to get it.

What was it about?

It was good. The set template, but I liked the story. I have read many stories, all of them are good.

Men meet a girl on the road. Give her the lift. Then find out the girl was dead all along. He met the ghost.

The ghost history is sad.

Dying must not hurt that much as forgetting does.

The reason time is so powerful. Everything is forgettable.

How do we walk on the Earth, being so invincible, proud of knowing 3-4 people, thinking we are so memorable?

There will be no one to take our name.

What a sad end of life.

In the Theatre at Night?

The Zoo but with Theatre.

But the feel-good ending.

Skipped it. It’s a drama.

Accident and she forget her memories.

But remember everything after going to some building.

Some stories do not make sense. Maybe I am not mature enough to understand them.

The Ghost of Christmas past

Ghost does not mean horror.

If there is a ghost, it does not mean the story is horror.

And why there are only ghosts in this story collection. Maybe a writer is hiding the good stuff.

But I dream of the day when the horror stories would make me scared.

Do I Recommend The Mistletoe Bride by Kate Mosse?

The Mistletoe Bride could work for you. But don’t go in with horror in your mind.

The Mistletoe Bride by Kate Mosse is collection of ghost related stories. Some are good, but most of them are boring. Not horror at all.