The Fall of Lisa Bellow by Susan Perabo | Book Review

The Fall of Lisa Bellow is more of a coming of age novel. There were teenagers, mean girls, high-schools things, but I did not find any secret.

Might be if there, Susan Perabo do not hide it well.

The blurb itself says that Lisa is the one kidnapped, not Meredith.

Even the process was not strange.

So, what makes The Fall of Lisa Bellow Likeable?

Where Things Come Back and The Lovely Bones, are kind of talk about families whose kids went missing.

How they deal with it or how they do not?

The desperation to get any information, the risky behaviour to go after any hint, and how people do not think twice before doing any nonsense.

This book does not go much deep into that.

What this book talk about are the people who get left behind to answer lots of questions and to make eye contact with the missing person’s circle.

The Fall of Lisa Bellow starts

The Oliver family has already had a tragedy.

Evan, seventeen years old with a bright future in baseball sports, get a blow and lost some eyesight.

They all were struggling there already, when the next Oliver, Meredith got another one.

Meredith went to a shop, and in a minute, a robber entered with a gun.

When leaving, he took Lisa with him, leaving behind Mer on the floor.

Then the book carries on.

Telling us the way Mer is coping with the trauma. The way Lisa’s friends and mother are dealing.

Claire, Mer’s mother, how she is saving her both kids by crossing the lines.

You know, you read books or watch movies in which a mother is very obsessive about her kids.

That is Claire. It is a first time I read an obsessive mother. Talking of first time, this book also provides a very fresh look into high school jungles.

When Lisa and Mer were talking, Lisa said to Mer that she is also mean and a bitch like everyone else, it is just she is not popular as her.

She ditched her friends as fast as she sees a way to fame.

She holds grudges and backbites a lot.

So, I was talking about the Claire.

Claire is definitely most realistic and practical character of the book. She talks sensibly. She gives right suggestions and knew the drawbacks of sugarcoating.

Good that story gave her point of view, or I might be easily deduced that Claire does not care.

She cares, a lot.

She is determined to make her kids safe, both physically and mentally, instead of giving them choice to chase their dreams.

The story is narrated from Mer and her mother’s PoV.

Give dimensions to the flow and keep some suspense alive, the less there was. I was expecting the Lisa’s PoV in the end, or of the robber’s. It could have made the book complete.

Now, due to no knowledge of Lisa, it does not satisfy the need of “THE END”.

I want to know more about her, as the title “The Fall of Lisa Bellow”, is named after her.

Do I recommend The Fall of Lisa Bellow by Susan Perabo?

It is quite an interesting book, telling us about survivor guilt.

The Fall of Lisa Bellow 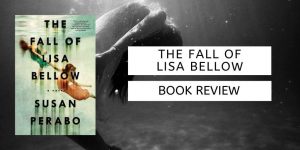 The Fall of Lisa Bellow, written by Susan Perabo is a story of two girl, where one get abducted while the other one left to survive the aftermath,