Tea for Two and a Piece of Cake is the first book I read by Preeti Shenoy.

Not anything different, but still save the grace.

However, similar to When the Wildflowers Bloom, it is a fantasy book. Therefore, the book has many mixed signals.

On one way, it tries to show how the woman became independent after leaving his husband’s house. But it also demean the sound advice by another female character, because a man said she is jealous.

When reading the book, you will realize that it was the protagonist that made a mistake.

Then taking the help (monetary, physically, emotionally) of another man to set up his business and proudly calling it ‘independency.’

How is it independent?

Leave the genders outside for a second.

But if the person uses the resources, extensive networking, and safety net of the family, then achieve something averagely good, would you call it independent working.

As far I know, the family provided everything along the scope to fail few times. Does not that count as a privilege?

Not everyone has enough capital to waste on mistakes and learn and in-process creating networks with people.

Do networking is expensive? Yes, it is.

First of all, the time is itself expensive. You cannot miss a day of work to make companions, while these independent people can afford unemployment.

After the first kid, the whole relationship changes between two people. The husband never wanted the kid; he was against it until the right time.

It is similar to the girl putting her career before the family.

But why, when a man does this, he is shown as a mean person. On the other hand, if a female does this, she is empowering, and it is her choice.

The husband does not do signalling or confusing talk. He clearly mentions he does not want children, but somehow, they get 2, not one.

Well, the husband was not using the condom, so it was his mistake too.

However, to take the entire responsibility of the kid on yourself, and then when he said it was her kid, getting angry is kinda weird.

They were her kid. He was doing his part by paying for them.

Yet, somehow the money does not mean anything because love is everything. The love she never gave to her husband, as he said while parting ways.

Not taking the Husband’s Money.

One of the stupid things in the Tea for Two and a Piece of Cake is Nisha refuses to take her husband’s money.

Nisha’s friend tries to persuade her and make her reason, but she was hell-bent on not taking it.

This is such stupid signaling to all the females and a wrong foot to stand. Just because you are financially in good condition, and another MALE has helped you set up your business does not mean you will now stand on moral high ground.

The book is fucking bipolar in some situations. Maybe the protagonist is bipolar.

When she leaves the house and starts her business (with the help of her friend, who got her client, connection, etc.), she thinks her friend’s life is miserable because she is still in the marriage.

Nisha starts looking at the married woman as a slave, after coming out of the marriage. In a way she started hating the marrying. There is some PTSD going on, which is shown as character development.

Moreover, Nisha’s friend was much smarter and intelligent than her.

Next is Fat to Fit.

In all this, leaving the husband, moving to her own, she lost weight. And losing weight means now everyone is looking at her. She becomes beautiful by losing weight.

But that does not fit with the narrative.

She was already a little bit fat in the beginning. So, as I observed and know (a little bit), fat people usually eat more when they are going through something.

With her, the reverse happened. She becomes fit.

Another funny (and misogynistic) way to look at the story is:

She slept with her boss and got promoted quickly. Soon the boss was in love with her. She tricked him and get pregnant twice. When the boss started having sex with a younger girl, she left him.

The next part is fantasy.

A younger person came into her life and helped her through everything. He did not even sleep with her when she was drunk. He set up her business and then make a good bonding with the kids.

Then he proposed to marry her. However, now she knows her worth so she will refuse. But it is a good thing.

At least one good thing in the book is that she does not accept his proposal.

Do I recommend Tea for Two and a Piece of Cake?

Yeah, sure, you can go for it if you are into weird non-directional books that contradict their lesson.

But frankly, there is a better book about a woman leaving their husband and achieving great things.

Tea for Two and A Piece of Cake 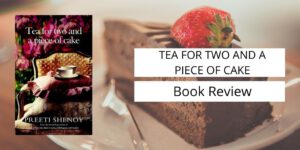 Tea for Two and a Piece of Cake by Preeti Shenoy is a story of woman, whose husband left her for a young girl. She starts her business and take care of her kids.