With its hateable characters and all the lies, Tattletale by Sarah Naughton is undoubtedly a gripping thriller.

The book throws the reader into the action from the first page, and then it begins the event that leads us to the point.

The book’s core is made up of two ladies and a man who is lying in a coma, whom we get to know only through the memories of one person.

Jody is Abe’s fiance, and Mags is his sister.

The most likable character in the book. But then she lies a lot, fragile, and lives in a delusional world.

But as we get to know her, we realize how broken she is. Brokenness is the attribute that made her likable, but it is more of likeness that people feel towards people who become the victims of societal injustice.

And with Mags, the reader finds out the reason and source of her pain.

The thing about the past is it never leaves.

People keep saying that you should let it go, but they do not want to see that it is the past that is not letting them go. It knocks the person down at the most unexpected of times.

The time could heal the wound; if someone is not scratching it regularly, else, it is doomed to become cancer.

Jody was abused as a child, and though the policewomen who save her life promised her that no one would hurt her again, they fail. Again and again. As they say, failing a kid means society failed.

When Jody met Abe, she feels connected despite knowing he does not have any interest in her. Because somewhere, she knew that she is protected and secure with Abe, as he will never do anything to hurt her.

In her delusional world, she creates a story of engagement and a a lovely relationship that never existed.

Mags is a high-profile lawyer and a strong female character. However, she is also coming from a family of a strict father that will go to any extreme to teach her discipline.

Like Robin’s father from How I Met Your Mother.

She ran away when she was 16 and did well for herself. However, her brother remains, but she never returned for anyone again; she never contacted any family member.

Mags has no reason not to believe Jody, as she know nearly nothing about Abe.

When she sees the glimpse of the truth, she realizes she had to get to the bottom of it and know what happens to Abe. Siblings may hurt last, but they will hurt.

But then, Jody is lying.

To write a character through memories is a difficult task. I have read many books failing to do that.

Tattletale by Sarah Naughton is not that. However, we only have few sources to learn about the character, and they always loved Abe.

Jody was in a hypothetical one-sided relationship with him, the old lady was fond of him, and due to the kind nature of Abe, people seem to like him.

The story never conflicts with the nature of Abe; it’s one-directional.

Now Abe is in a coma after falling from the stairs, and next in line connection is his sister Mag. She is ready to pull the plug, but Doctor advised her to wait a little longer.

Will buy more of your book sure pic.twitter.com/LubpLzegnT

The story starts after the fall and how the two lead females try to make sense of what happened. Jody knows everything but not letting go of her fictional world because what lies ahead is misery.

Mag is becoming the same person she despises — her father. A strict, challenging, and emotionless creature.

But still, the sibling bond is not easy to break. So she stays to find out more about her brother’s life. As she explores the pieces of his life, the broken connection starts to sync.

Sarah Naughton does not need lots of character to create tension. A sense of dread, of something nasty, is always there from the first page.

Something awful has happened, and the buildup towards the truth is tightly knitted.

One of the themes of the book is to handle the pain.

How do you recover from it?

We see two types of women. Mag and Jody.

Though both females’ circumstances and trauma are different, if we consider childhood pain a basis, we can analyze the deviation of their life.

Mags, who ran from his house is still running. She is always running from the pain and the love that comes before that pain.

To be defensive to the extent that even the normal emotions do not allow to be in can make a person hard. But then you are already so much hurt that you will take the loneliness over the betrayal anytime.

While Jody is an entirely different case, she was rescued. And the people who were supposed to protect her harmed her. She had trust issues and aware that no one believes her at all.

She had not that power or confidence to be fierce. Because there has to be a source of bravery. You cannot generate fierceness. Can you?

It has to come from outside.

A supportive family creates a confident kid, and a nurturing society makes the kind man.

Jody gets nothing, and she becomes avoidant and starts living in a delusional world that is far happier and cozy than the real one.

Two ways you can deal with the trauma are:

The third way is to accept it and move on. Abe did it, and he ends up dead.

It is a sad book.

Small chapters have the vibe of ‘one more chapter.’ Shifting perspective lets the tension grow and keeps the readers on edge.

Though Jody’s final scene when she reveals the truth is good, contextually speaking, it could have done with more in-depth writing.

Tattletale is good, but somehow, somewhere, it feels like it is not 100%, and writing is missing something. Maybe the honesty.

It is challenging to write down that kind of pain, but then I have read other books, and they kind of get that.

I am not a good writer, so I can’t explain what I am saying, but frankly, something feels lacking.

Like you see a swimming pool and want to jump, but a voice in your head keeps saying the water is not deep enough.

Do I Suggest Tattletale by Sarah Naughton?

Sure I do. It is a fast-paced novel with an enjoyable story and a nice enough climax.

Tattletale is not a travel book. You should read it at 10 PM alone in your house, and it will hit you perfectly. 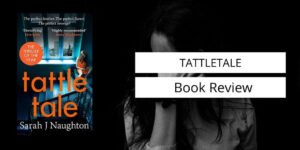 Tattletale by Sarah Naughton is a well-paced thriller that does justice to the characters and their pain. A heavy theme handled expertly by the author.