In this post, I am going to review two books of Susan Fletcher. Oystercatchers and Eve Green.

While I will try to point out why I enjoy the Oystercatchers more than the Eve Green.

Then after a month, I come across her first book and I bought it without giving a second thought. I started reading it as I finished the book I was reading. The Book Thief.

It is a possibility that because of the hangover of Book Thief, I did not like this book that much as Oystercatchers. I just cannot relate to the story in any way.

For me, there was not even a story, just a pregnant woman remembering her early days in Wales.

The story of Eve Green is about Evangeline, girl whose mother is dead, and now she comes to Wales and lives with her grandparents.

In the present time, she is pregnant and she is recalling all the moments that led her here. She has a perfect life now. She is preparing herself to be a good mother by accepting the wrong and bad she did in her rage and anger, which bring the bad consequences.

The story of Oystercatchers, Moira is sitting at the bedside of her sister (in comma).

Telling her sister about her detached childhood, lonely puberty and introverted teenager life. The decision she makes along the way and the consequences they have.

In Eve Green, Evangeline has Billy, her mother’s friend, who become her friend and yet manages to create a mystery around him. Moira has her mother’s sister to fulfill that purpose.

We all want out lovers to see us that way – unaware, natural, serene. We want to change their world with one glance, to stop their breath at the sight of us. 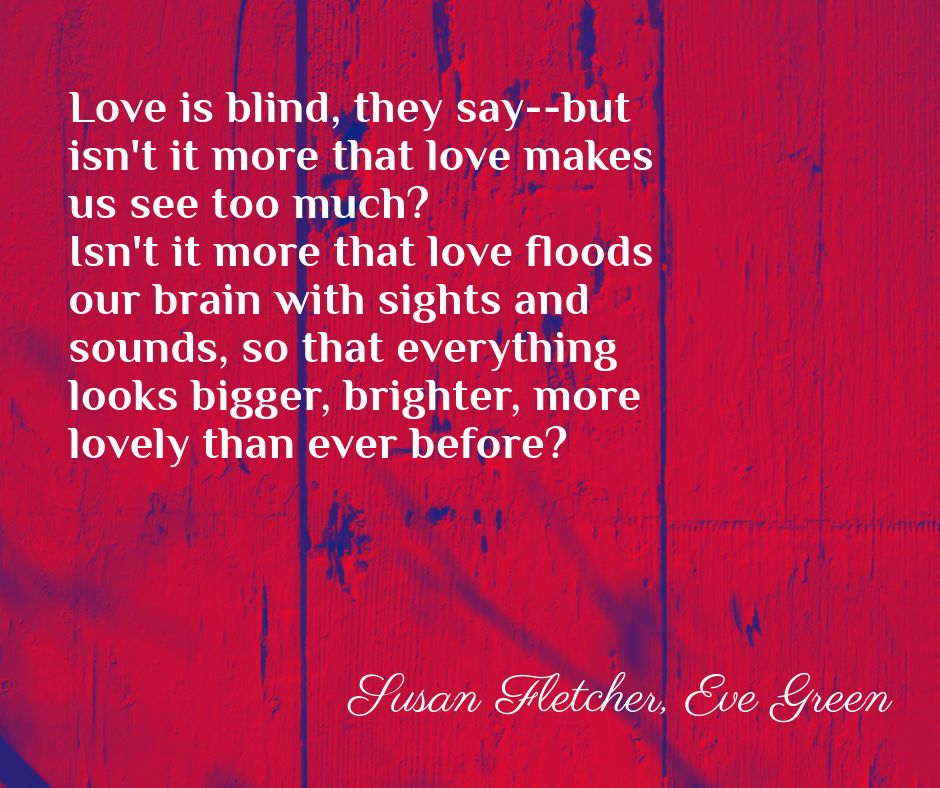 Both Ray and Daniel are charming, good-natured and they love their females.

Moira is introvert and Eve is the one who fights in the cafeteria. This is the difference. However, both, at given time, do cheat and tell lies and that was the whole plot of their stories.

A lie or an act that rolls the ball in the wrong direction that made them feel guilty for rest of their life. Saying more will ruin the story.

Are not both stories looking similar?

Why did I like Oystercatchers and not Eve Green?

Because the characters of Oystercatchers are more natural and relatable and the event that happens in that book are fathomable for me.

No doubt, Susan Fletcher is a likable writer but I was unable to imagine Wales, Farm, and rivers when reading Eve Green.

However, I was clearly looking the hospital bed, the seaside house of Moira, and her hostel room in Oystercatchers.

Might be it is my fault but this is how it was.

I trusted him like I trusted the sky to stay above my head.

There are not many characters in both book of Susan Fletcher and we only learn them from the protagonist POV. In addition, the strong and important characters only come on pages in form of memories.

Well, it does not matters because Fletcher does very good job on her characters.

Moira’s character is written so Stone and unmoving, it irritates a lot of time and still gets sympathy, and then Eve is written as both. Mature and forgive type and childish and stubborn type.

Ray and Daniel do not get that much of their own as books focus to a central person.

I love the way Susan Fletcher write, it is music to read. Fragment of sentences making up the story. The rhythm of words and beauty of rhyming. It is one of the best ways of writing skill and she excels in it.

Both books are great, just second one is more.

I would read more Susan Fletcher.