Sea of Poppies by Amitav Ghosh is a first part of the popular Ibis trilogy.

It is a long book, with a detailed history of characters, and their journey to the ship.

With a large cast and separate motivation, arc, and theme of each character, the book remains shallow in terms of story. But maybe the Sea of Poppies is not about the story, but the journey of these characters – both physically and spiritually.

As we see a King becoming a prisoner, a supposedly male turning into a mother, a high-class girl, and a low caste girl, leaving their home.

The funny thing is they both doing it due the fear.

Still, when you read it, there is a stillness in the sea, that is calming but annoying, as to one has to read 500 pages to find there is no actual conclusion, what-so-ever.

The Ibis is coming to India for some opium related business. As the opium is actually at the core of the book, but there is so little about it.

But I do not have any interest in history, so I did not care much about that. I was in more for the cultural references and the appealing language.

The first part is about set up.

Amitav Ghosh takes us on the tour of the opium factory via Deeti – the low caste girl. When her husband faints while working, she has to go there to fetch him. And Amitav Ghosh has given a descriptive display of the various part of the factory.

Then there is Paulette, a girl whose father is dead and now she is living at her benefactor house. The benefactor is the partner of King Neel.

There are many other characters whose names I might have forgotten, but they all have their part to play.

In the second part, the ship is on the coast of Calcutta. 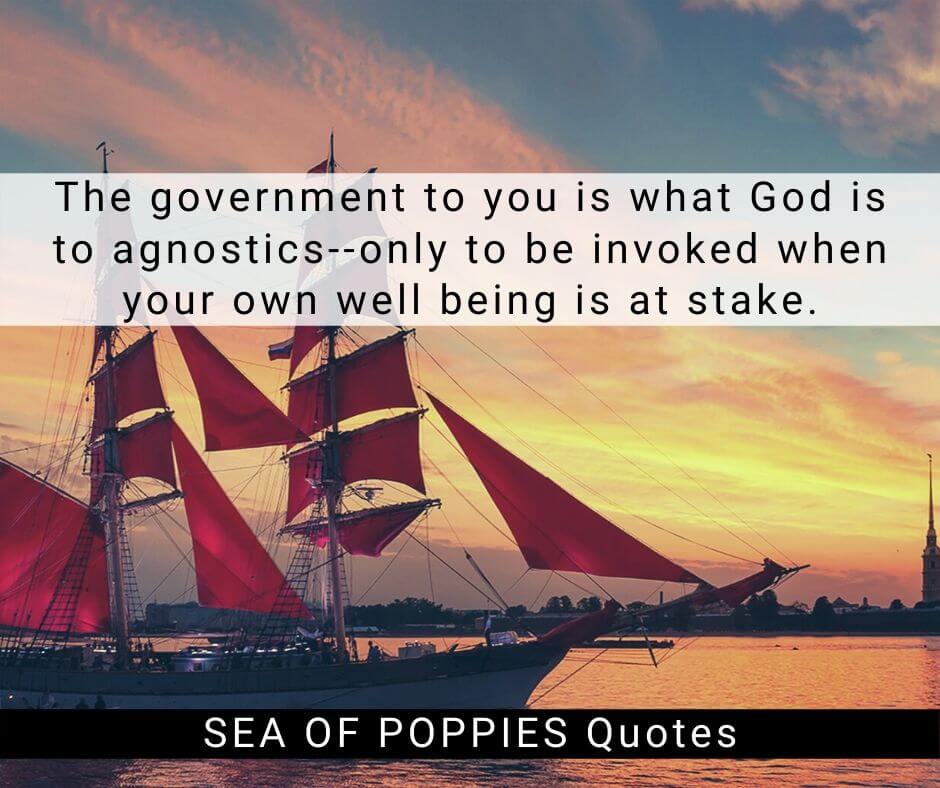 Now the character starts to move towards the ship.

Here, I admire the brilliance of the Amitav Ghosh. How smoothly he brings all the character on the ship.

I mean, it is much better than what happened in the finale of the Game of Thrones. All the character ends up in the Winterfell. In this book, all the characters do end up on the Ibis.

Some are direct, like Paulette, who wants to go to a place where the Ship is going. And they have to fight for their position on the ship while some are forced to be on it because they feared that their life in India is not going to be easy.

When everyone on the ship, the third part of the story begins.

That is the Ibis leaving India.

Now all the characters are on the ship, and they are connected as Jahaaz Bhai Behen.

Which each part, Sea of Poppies, becomes fascinating. Maybe it is because you know all of them, you start to care about the characters, and begin to understand their actions.

But whatever the reason is, the more you read this book, the book gets more gripping.

In starting, it looks like it is hard to read 500+ pages, but after the first 150-200 pages, the story captures you, and you do genuinely like sailing on the pages of Sea of Poppies..

However, no story ends without a good murder.

And this was my exact thought when I was like 80% into the book.

Like this book needs a murder, this ship needs a death because when you are reading such a book, you expect a violent crime.

There is all sort of crimes in the book, various type of rapes, and abusive relationship, and seven types of crimes.

But without murder, the book might have fallen short.

Ofcourse, Amitav Ghosh is not stupid. And I do get a murder. 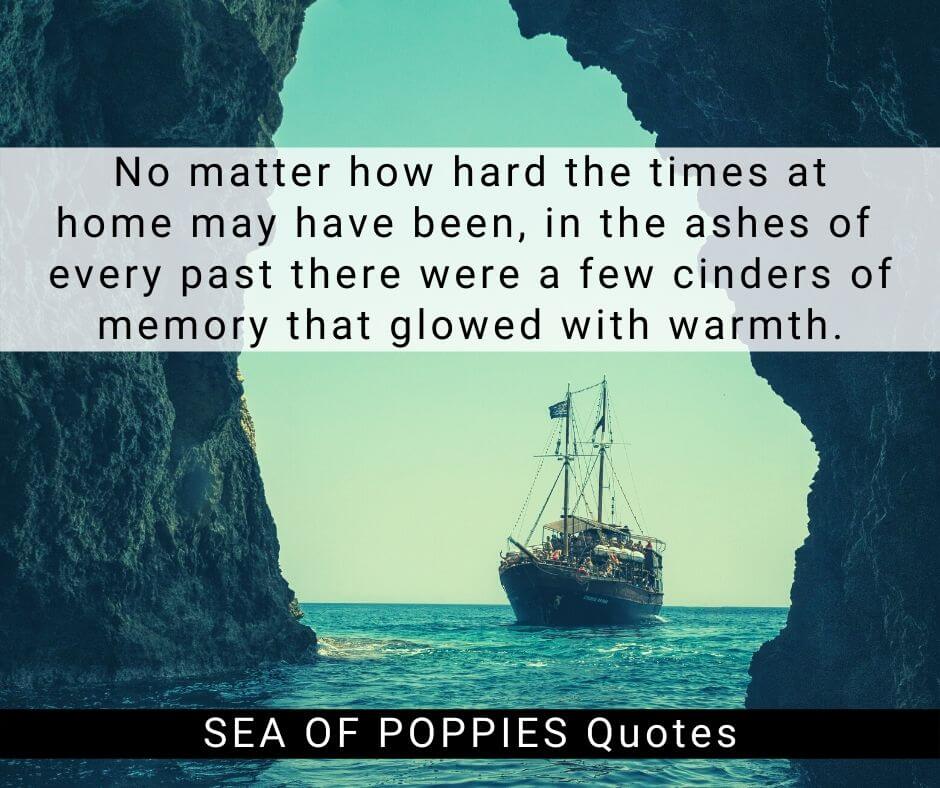 Transformation of the Neel is what I don’t agree with.

To some extent, the book tries to show King Neel in some good light. When one acquires the wealth from their ancestors, and use it to oppress the others, he can’t say he is the victim of it.

You cannot say that it is not your fault that the wealth was given to you, and you become a terrible person.

But the story tries to transform the Neel. Giving him a chance of redemption.

Though everyone deserves the chance to redemption, one cannot be forgiven for the crimes one has committed. Moreover, when he was training the next generation to follow his steps.

The caste system in India is ugly. The ugliness can be seen in the upper caste’s eyes as well as the lower caste too. It is a hierarchy based caste system.

Even in 2020, the caste system is prevailing, and the upper castes are taking full advantage of it. More importantly, the upper caste has become smarter and educated due to their privileges.

While the lower caste remains the same.

In the book, Amitav Ghosh gives a glimpse of the caste system but does not explore it properly. The same goes for the religion-based segregation; the Ghosh also leaves that.

But surely he cannot cover everything.

The ending of the book is surprising and disappoints.

I do care about these characters, and Amitav Ghosh fails to give any closure. Or one can say that he refused to provide any closure.

I feel like the Zachary Reid, the second mate of the ship looking at the characters, leaving the ship in the small boat.

I can’t do anything, nor the Zachary, but the story ends abruptly. With no answer or hint, how the life of these characters is going to take shape. 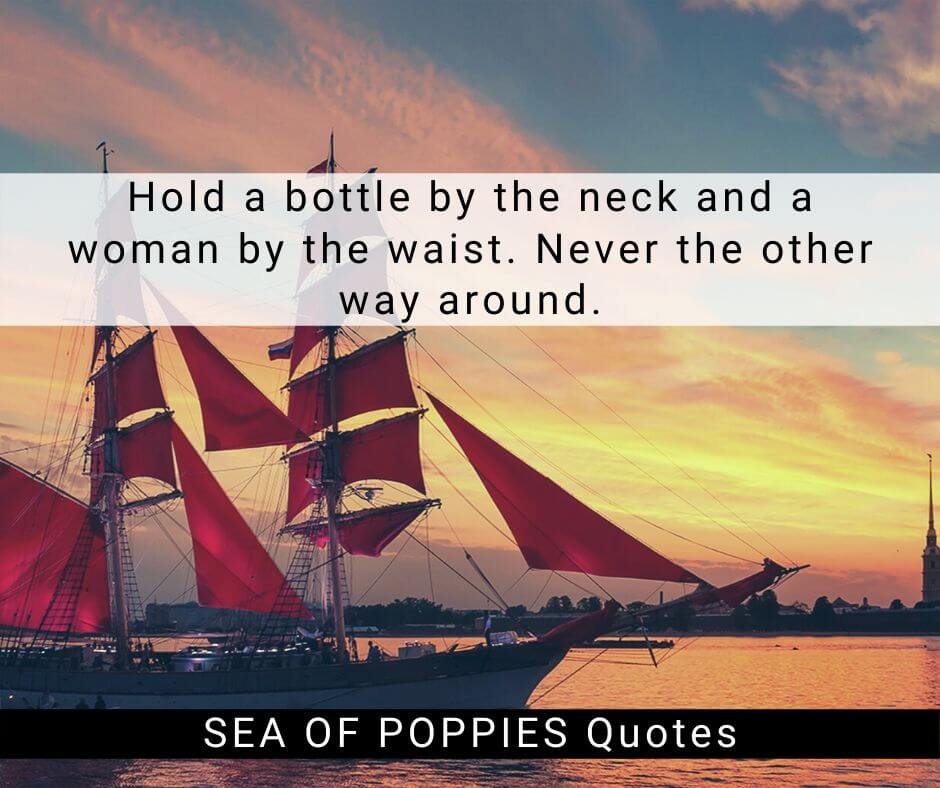 Sea of Poppies was defeated by The White Tiger, written by Aravinda Adiga.

To be honest, I think the decision is right.

Though both books are far from reality, and much is reside on his imagination, the white tiger touches the circle of indirect slavery in India. The book displays why rural India is so violent, and the toxic masculinity that seeps into the culture due to the hazardous environment the kid grows up.

But there is no need to talk about The White Tiger here.

If you have no problem with long books, then the Sea of Poppies is undoubtedly the book you should go with.

It is rich with history, filled with descriptive terms and languages.

I may read the sequel of Sea of Poppies if I ever found it on sale.