Running Wild by Michael Morpurgo | Protect Homeland or Not

Running Wild by Michael Morpurgo might be the last book of Morpurgo for me. If there is no other book left on my shelf. I am not going to buy other Morpurgo.

I am totally tired of reading childish literature by him.

The thing is I liked Private peaceful a lot. After that many books of him was a disaster for me. But then the Alone on A Wide Wide Sea book ignited the hope again. But now, It’s over.

But I will talk a little about Running Wild.

Running Wild is about the Tsunami that affected many people. In India, the whole South suffered the tragedy. I was young at that time, but the incident was too big and it was covered by every major channel for a long time. So it is still in my mind.

Running Wild take place in Indonesian coasts. Where the Elephant the boy was riding sense the waves, and take a run to protect himself. In a way, the elephant saves the boy too.

The story was written for the kids, and I am not a target audience for it. I read it because I support the notion that you adults enjoy kids book more than the kids. It kind of makes them remember about their childhood.

The reading of Winnie the Pooh, The Jungle Book, and Tiger came for the Tea are an excellent example of this.

I don’t understand who targeted reader for Michael Morpurgo books. They are too kiddishly written for the adults, and they are too depressing for the kids.

Every book I read of Michael has some depressing element attach to them. Most of the time they start with deaths. Death of a parent or a pet.

Running Wild has dead parents. Both of them die, and one in front of him. I don’t think that is the kind of story I am going to read any kid.

And then the whole Jungle thing was not that exciting.

The author is a fan of Jungle Book, he tried to create similar magic, but it is miserable to see him fail so badly. The boy doesn’t die after not eating for so long time. He doesn’t die of dehydration, he eats stupid stuff and does not get any diseases. It is like he is running on some kind of fuel that does not make him weak or ill. He doesn’t have any clothes, and there is no climate condition that affects him.

The jungle is a dangerous place, and yes, you have an elephant with you, but you cannot protect yourself from various insects, and wild creatures that can kill you in a bite.

But nothing happens to him.

Nor this he suffers any kind of trauma or long term damage.

But with no one to talk, he talks with animals and become friends with them. And he develops moral values to save the animals and forests.

One of the major problems is stuffing messages in the book.

Morpurgo wants the reader to think about the animals and climate. He also wants to show how the army is affecting the families, how war is wrong an all that crap.

But when the story ends, the boy does what he feels like to save. 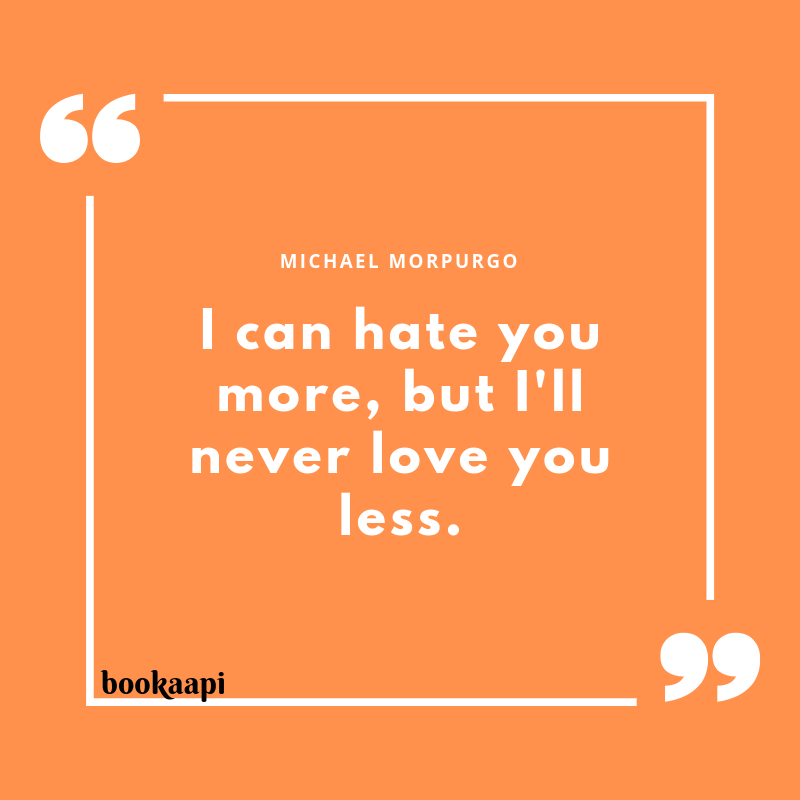 So his grandparents have to relocate.

In a way, it is the same as a person leaving behind everything to protect the one thing he loves most. In this kid’s case, that thing is forest and animals.

For many others, that thing is usually their birthplace.

If we look closely, the forest is symbolically his birthplace, as he starts a new life there. And he has enemy and friends here too. The enemies who are trying to destroy his Forest and capture the animals.

Like very much a person who thinks he has to save his birthplace by guarding it. So they go to the army.

The kid stays at that place.

As I see it, it is the natural tendency of a person to die for their birthplaces. They are too attached to them and feel obliged to fight and kill for it. When a kid does it, it seems fine, and okay.

But when his dad dies doing it, the author tries to show it as a very stupid unnatural and unnecessary event. Like it should not happen.

I understand that protecting the jungle is better than war. But the intentions are the same in both cases.

The Running Wild is not a book that I think I would suggest to anyone.

What do you think about this book of Morpurgo? Do you like it?