I did not buy Private India by James Patterson.

This one was picked up by my brother, to whom I said to not to buy anything else I tell.

But he wanted to buy at least one kg to round off the money figures. So the Private India comes to my house, and I think I understand the statement many young adult writers use in their book. That is,

In Mumbai, seemingly unconnected people are dying, strangled in a chilling ritual and with strange objects carefully arranged with the corpses.

For Santosh Wagh, head of Private India, the Mumbai branch of the world’s finest investigation agency, it’s a race against time to stop the killer striking again.

In a city of over thirteen million, he’d have his work cut out at the best of times, but this case has him battling Mumbai’s biggest gang lord and a godman who isn’t all he seems.

And then he discovers there may be an even greater danger facing Private India.

Hidden in the shadows is someone who could destroy the whole organisation – along with thousands of innocent Mumbai citizens.

I did read it, though.

Because according to back cover, it seems a crime thriller.

I do not read this genre. Give it as go.

As every book I read of this type, this one is lacking the depth of descriptions.

The writing creates an illusion that the story is moving fast, but in reality, nothing significant is happening.

The book is divided into 116 chapters, with some chapters from the murderer’s point of view, and other are direct story telling.

The story is itself not great.

Hindi detective novels are full of this type of stories.

A retired or expelled cop, his ex-colleague, a tech geek (who can hack any machine with some clicks), a genius Doctor, and a Glamorous girl.

Trying to catch a murderer and in the chase, find each other’s secrets. Solve conspiracies and save the city.

Private’s leader Jack Morgan is in India (for what reason?).

People start dying and Private get involved. But the so-called Best Detective Agency in World cannot save anyone. Eight people die in eight days, at last, they save only their team members.

Something happens and stories move and then wait for another murder to happen to move again. What was the Santosh doing?

Dude, you must stand and do the investigation to find answers, but they just follow murders and then link them to find the pattern.

Santosh thinks he has a drinking problem but he does not drink more than a bottle in the whole book.

Nisha is an investigating officer, but when she does that?

Santosh asked her to do it and then 4-5 pages later she came with a report.

Mubeen is a tech master, but all he does is DNA talk. DNA of this, DNA of that. Most of the case was solved by Mubeen because of his DNA knowledge.

What is with Doctor, he does not do anything important until the end where he just adds more pages to book.

Munna, Nimboo Baba (because Ashwin Sanghi is not able to create a better name for a baba in India), Indian Mujahideen, they were not required by the story.

The story could go without them if you remove Bomb-part from the book.

The Authors must have focused on the murder plots but to add more spices they made it into a circus, with lots of character.

So many names are tough to follow like every other person have two lives. Which one has which one and when and how they are intersecting. DAMN !!!!

All and all, if you have other option, go for them.

If not, it is good one time read.

I am not going to review long because, the books is not really worth it.

I was right assuming that Patterson is not a writer for me, and I am right now after reading him.

It’s too basic and boring. 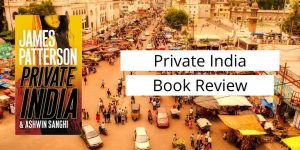 Private India is written by James Patterson and Ashwin Sanghi jointly. A typical thriller with nothing new to offer. but there are more bad to it..