Both the books are on my odd-books list. Surrender by Sonya Hartnett and Midwinterblood by Marcus Sedgwick, both books are unique and way too different from the books I usually read.

Not only the story is odd, but also the way writer tells it is kind of eccentric.

Answer me this, do you believe in many lifetime love? Or multiple life?

Story of Midwinterblood by Marcus Sedgwick

First story take you to the time 2073 and the last one is of before the 10th century.

In every story, Merle and Enrick bump into each other. Every time they get separated. yep.

That is the story. Their paths always cross but never alligns.

That is the misery of Midwinterblood.


The Island and The KING-QUEEN

It all happens on an Island around full-moon time.

It will not spoil your story that much if I tell you that the King Enrickr promises her Queen Merle, that he will come back for her in next life.

Queen promise back that she will follow her in each life. In the next seven lives, they meet but never recognise each other as King and Queen.

That’s why they always split.

Until the seventh life, where they identify each other, and ready to accept what that promise is bringing to them. 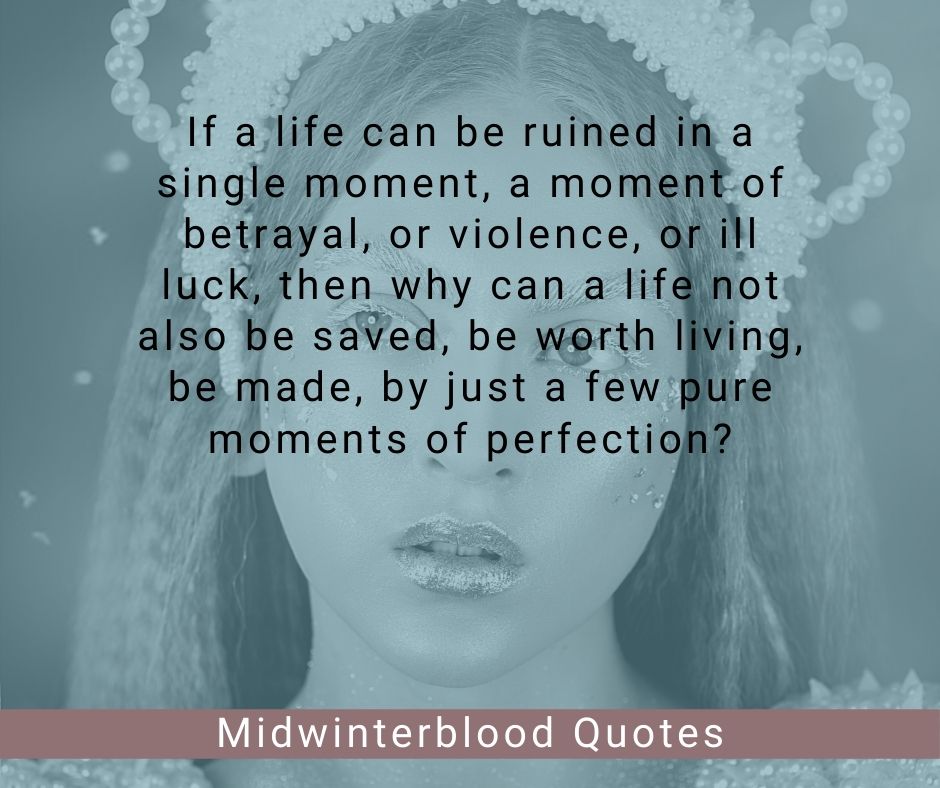 Seven short stories making up a book, and assembling themselves to show a big picture.

To write for different times, Markus uses a tone that does not divert the focus of reader to anything else. You are just reading it for Merle and Enrick, because they captivate you.

In the background, you are also enjoying the writing which is so glorious and amazing.

On the other side is a book which is written on the curve of poetry.

I read the Surrender just because of the writing, and plot which was so weird. After finishing, I reread some passages just to soak the horrible beauty of them.

Tough to connect with characters but it is totally worth to read.

This is box title

The book starts with a boy who is dying.In last moments of his life, he remembers his childhood and the decisions and relations that led him to here.

I am dying: it’s a beautiful word. Like the long slow sigh of the cello: dying. But the sound of it is the only beautiful thing about it.

Anwell and Finnigan. I do not want to ruin this book, so I am not going to write much.

This is a story of two kids. Friendless Anwell accepts Finnigan’s pact of friendship, which means that all the wrongdoing will be done by Finnigan and Anwell will be his opposite good side.

Every time something bad happen to Anwell, awful incidents happen in town. Book is full of fire.

They kind of divide themselve in Angel and Satan. But soon, the Angel realise that he is actually a Satan and he have to die do to kill finish both Satans.

You lit the fires as much as I did. You told me, go out and burn. Besides, we’re reflections, blood brothers, remember? What I do, you do.”

After some time, Anwell realises that Finnigan is controlling him.

This realisation happens because of Evangeline. Girl, Anwell love, and Finnigan do not like.

Troubles start in friendship and Anwell has to make many hard decisions.

This is a story of a lonely person desperate to fit.

In doing so, he loses the little he has, and realise that he is still alone and dying.

There’s fire in my fingers. I burn everything I touch.

Both books show how a person loses what he has and give all of him and still do not win.

But is he really loses?

There are more stories in the books than this, but I cannot tell it without spoiling everything.

Finally, both the books, Midwinterblood and Surrender are the weird books.

And I totally recommend them.

GO and read them, you will enjoy them.