Men and Dreams in the Dhauladhar by Kochery Shibu | Book Review

Basic Blue Print of the Men and Dreams in The Dhauladhar by Kochery Shibu. Nearly hundred and twenty pages are of characters and their stories.

Then, next 170 pages of Hydro Dam. Thirteen or fewer pages were of Climax. The book needs editing.
The title of the book delivers the wrong message.

It should not be “Men and Dreams In The Dhauladhar”, it should be “Characters and Stories, Related to Dam”.

“So the writer who breeds more words than he needs is making a chore for the reader who reads.”

Self Published Men and Dreams

This is a self-published book. The author “Kochery C. Shibu” has written the book out of his experience.

He did work on that Hydro-Electric dam he mentioned in the story. He had the lots of research and experience on his hands, and he did write about the construction of the Dam more than the story demands. There is lots of information related to that Dam.

The daily workers, machinery, thekedars, inspections, Chief Engineers, Supervisors, even the drivers and prostitutes. Unnecessary details made the book a journal I did not volunteer to read.

I understand writer has a good knowledge of all this but that do not mean that this is useful for the story to add all of them.

Men and dreams in the Dhauladhar is republished by Niyogi Publication.

The story itself did not demand astute data of the Hydro-Electric Dam’s penstock or erection techniques, but the fact is that it seems to be out of control of the author.

It is always good when one uses aboriginality while portraying, it grants an authentic picture. Using Hindi slang words, the proverbs, and sayings, give validation to the image.

As the Shabdstudio.com puts it:

the book turned out to be a little bit bland and mechanical.

So many Men and Dreams in the Dhauladhar

The book gives the impression that it has been written character by character. I mean, the author writes the character and their stories and then he linked them through the Dam. It looks animatic, not artistic.

The story lacks continuity. The flow of story gets disturbed repetitively. Say it happens because of many characters, back stories, or the irritable facts regarding the Dam project.

It destroys the interest of me while reading the book.

A good chapter move the story and then the next chapter starts talking technical language and management of the site. That blocks the road.

About the story, I would say that I did not find any in the Men and Dreams in the Dhauladhar, of course, I read many.

The plot occurs feeble with respect to the amount of data and characters formations. But that was intentional I think. Because it was not a whole story, but the book has many stories associated with each other due to Dam. They are separate and do not mingle that smoothly.

In between many characters, there are three, which you can say were main characters. Rekha, from the music family, become a Doctor but want music in her life and seek the love that makes her heart go “dha dhin dhin na”. Khusru, a terrorist, at a mission of destroying the Dam, craves family love. Nanda is an engineer by profession and a murderer by situations, running from violence.

They all three, come to Dam with different intentions, different ways, looking for different objectives. So-called Fate drives them together.

MEN/WOMEN in Men and Dreams in the Dhauladhar

The other characters were Manghu Ram, Pradeep, Vijay, Mukesh, Katarina, Kuchi, Sherpa, Nandalala, Sherah, Belcha, Lalaji, Taufiq, Ayesha, Zarina, long list. They start coming from the first page and do not stop until the last.
They are sides characters but they offer strong presence. It took lots of time for character build up.

The author starts from the bottom, from their ancestors and then introduced the character the story is about. Then, it took a complete book to make them sit in a car together.

I expected that it would happen sooner, so they could understand each other well. When they meet, they tell their tales without much hesitation.

Out of characters for Nanda and Khusru.

Climax of Men and Dreams in the Dhauladhar

The climax last as fast as it starts. The whole plot was leaning on that pillar which was not that strong or grandly crafted. The Rathod man should have got more pages for investigation.

I should also add that that character has the potential to be one of the main characters.

With one side Dam and terrorist attack, it would be interesting to read an Intelligence Officer’s perspective.

There were italics, which have the meaning at the starting, but as the book move, they lose the magic.

Men and Dreams in the Dhauladhar Diversity

One of the best things in the book was the diversity. Which author manages to put without making it a khichdi. They fit. Kerala, Kashmir, Pakistan, England, Lucknow, Himachal, and much more.

Characters were from different cultures and places and they carry it in their demeanour.

Taken as a whole, stories submit a watchable presentation because of some slides which were too good for a debut author.

Men and Dreams in the Dhauladhar (if you ignore or do not read the extensive knowledge of Site management) is likeable and very much better than most Indian bestseller.

At least here we have an author who has the knowledge of his subject.

The End of Men and Dreams

The Men and Dreams in the Dhauladhar ends with a note.

It is not to make mansions, nor to sleep on terrace, but to live in your birthplace for a few days that this struggle is all about.

This was the theme of the book. Worth reading it. Jump for Men and Dreams in the Dhauladhar.

Lastly, I would say thanks to the author for providing me with this book in exchange for honest review.

Edit: This is not a self-published book. The book is published by Niyogi Books. The E-Version of it is self-published. The hard copy has been sent to me by the author. This review is of the paperback version.

Edit2: The book has 278 pages total. Out of them, approximately, dam content is in 70-80 pages, rest belonged to the characters, but both were blending, as many characters were living at the dam.
I am not saying Dam bits are not interesting. The dam has the plot and provides a base for the story. Author explain difficult terms.

Men and Dreams in the Dhauladhar 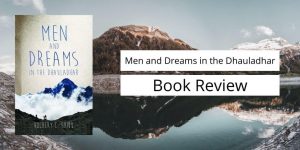 Men and Dreams in the Dhauladhar by Kochery Shibu is a story of a terrorist attack on a dam. Many characters, technicalities with good language made up a readable book.