If you read the Cuckoo review, you know what I felt about the book. This is from the same author, but even worse when it comes to engaging.

Magpie by Sophie Draper is psychological suspense, but there is no page-turning aspect.

I mean, Kate Atkinson‘s writing is slower than Sophie Draper’s, but she has the candour sense in her writing.

However, Sophie Draper’s writing feels like ticking all the points mention in the article ‘How to write a psychological thriller?’.

The slow start, hiding the facts, giving away little information to keep the reader hooked — all of it makes the book engaging, but somehow Magpie feels artificial.

The only thing I like about the book is the climax because I did not expect it. But then, writing the ending that no one can expect is not a good ending.

The same thing happened with Cuckoo; climax was so different from the expectation that it became unnatural.

But well, what could we do?

I will not reveal suspense, but it is okayish compared to the rest of the story.

Maybe that’s why the suspense is good because the rest of the story is not good.

The theory of relativity applies to writing too. I mean its a universal there and applicable everywhere.

If you make the starting slow, and the middle part boring, and put the mediocre stuff at the end, the end will itself look good.

Keeping the expectation low really helps in the long term.

But let’s see the story…

Duncan and Claire. Both are good doctors and set up their practice.

As the kid is born, Claire and Duncan decide that Claire will see the house while Duncan will work.

Duncan expands the business by working good enough, while Claire gets depressed, managing a kid.

To be honest, I do not understand if raising a kid is a huge job that can destroy your whole life. Or the women tend to make it a big job so they can proudly say that they are ‘Mom’.

I see women working in fields, doing labour work, raising kids. And then I see modern moms sitting in AC rooms, discussing how raising the kid (with the help of a nanny) is a herculean task.

Okay, the world is unfair to the women working in fields, and it is so unfortunate. And it does not take away the right to complain from the person who has means.

However, something does not feel right when the people having resources and wealth complains about the things that are not that hard.

On the other hand, Claire does not seem to be a career-oriented person. She keeps saying that her career lost due to the kid, but she does not join the practice later.

But it is not clear why there is a gap between him and Joe. Okay, he might hate Claire for whatever reason, but why does he not like Joe.

There is so much background missing from Duncan’s character,

What made him what he is?

I don’t get it. Why he distanced himself from his own son, or is it the mother who created the raft so he can steal the son, whom birth he blame for the failure of her career?

The family drama is so broken and inconclusive in the book that it weakens the book.

If Claire is the way she is, there must be some reason behind it.

From the beginning, the book tells the readers that something has happened.

The story revolves around what happened.

It is about Before and After that incident. The story is told by Duncan and Claire PoV, as both oscillate from Before to After.

The premise of the suspense is that incident.

In a way, the story has three characters: Duncan, Claire, and Joe (son).

All three of them have to be in the incident, and how each one leads to that place, and why they do what they do, resulting in the whole climax is the story.

But sometimes the description is boring.

Claire goes on, monologuing some random thing. Frankly speaking, it was Claire’s part that was boring.

These were telling the story of the family dynamics, but is not it supposed to be making both of them equally bad.

But I see more faults in Claire than Duncan.

Reading Magpie by @sophiedraper9
.
.
house and girl reminds me of cuckoo pic.twitter.com/tTTfyRV4uA

We have to talk about Joe. What was his purpose in the story? To create the conflict.

Again, I might be taking Duncan’s side, but he needs to sort out his priorities. Running around, collecting coins is a good hobby. But the way he does it is so childish and stupid.

Duncan was right; Joe does not understand the difference between real-life and hobby life. Claire was encouraging him.

But we can say when you start living in a privileged bubble, even the little criticism feels like fascism.

Do I recommend Magpie by Sophie Draper?

Too many boring words before you reach the climax. Don’t waste your time and energy.

Myself, I am not buying Draper anymore. I am not the right reader for such books. 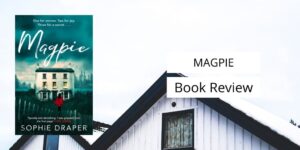 Magpie by Sophie Draper is a psychological thriller, revolving around the accident. A boring story with a good climax, like typical life.