As a Muslim, I have a problem with Jihadi Jane by Tabish Khair.

It is about how the Tabish Khair talks about Islam. Like conservative Islam, Orthodox Islam, Practical Islam.

There are not types of Islam; I can accept the fact that some people take their religion more seriously than other people, but that does not mean that they are following a different religion.

One can say that some people are not following their religion in right way.

Take some person of same religion and you will find that every person does not follow religion to same extent.

But that does not mean that there are “TYPES” of religion.

Also as the story tells that Ameena turns into an Islamist extremist, even then she lied to her husband about her virginity.

Does not she know that lying is one of the biggest sins in Islam?

Why Jamilla do not know that it is because they fear of Allah so much that they refuse to enjoy the world even a little.

Somewhere in between, there are holes that were not filled by Tabish Khair. 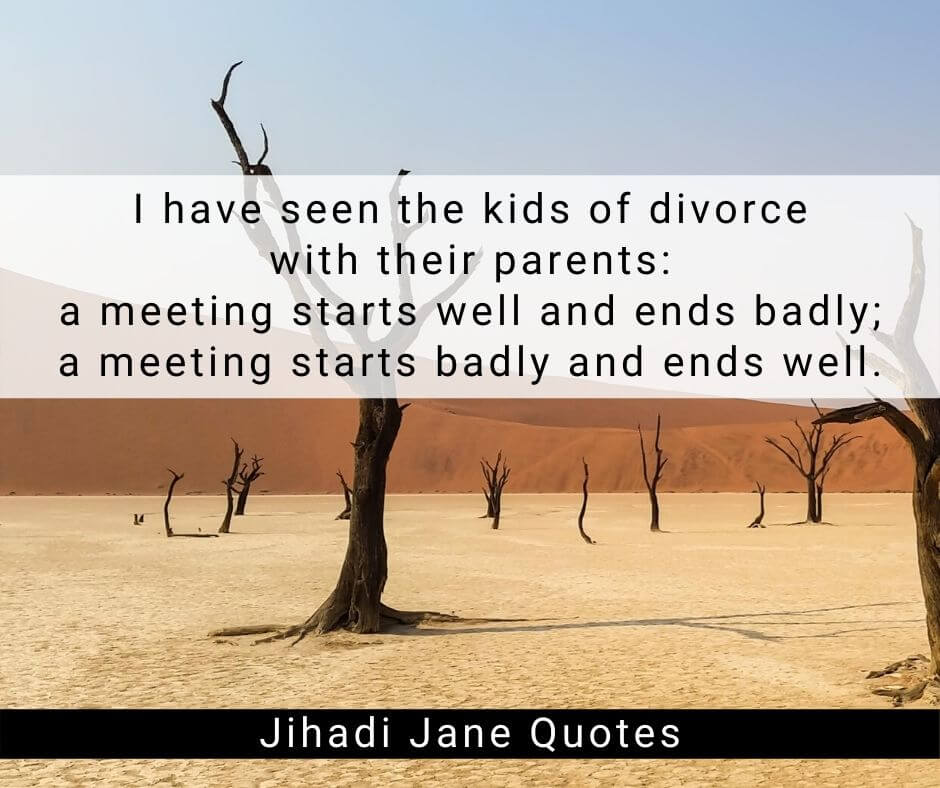 The End of Jane

Besides this, the major problem that bugged me was the end of the Jihadi Jane.

I was expecting a conclusion, some answers, not questions.

The story is a narration from Jamilla, I think she is telling this story to any writer (Tabish Khair ?) sitting in a café.

The story is about Ameena, about how Jamilla and chances change Ameena into a faithful Muslim from the ill-mannered girl she was.

Jamilla upbringing made her lay back women with no opinions while Ameena was fierce from the start.

She starts going to Mosque with Jamilla and in a short time she learns a lot about Islam, hence, she starts looking at the injustice of West on Muslim countries.

Jamilla was with her always, she introduced her to all of it but she does not act very actively. Until the day, Jamilla’s parents pressurise her to marry.

Marriage had always been something like the swirling rumours of a distant war; now, suddenly, the cannons were at my doorstep.

Thinking of helping their Muslims Jihadis and to show the determination of love to Allah, Jamilla and Ameena choose to participate in Jihad.

They go to Kurd and Ameena marry a Jihadi. Jamilla does not want to marry, one of the prominent reason to run away, prefer to live at the orphanage at the border of the Town in Kurd. 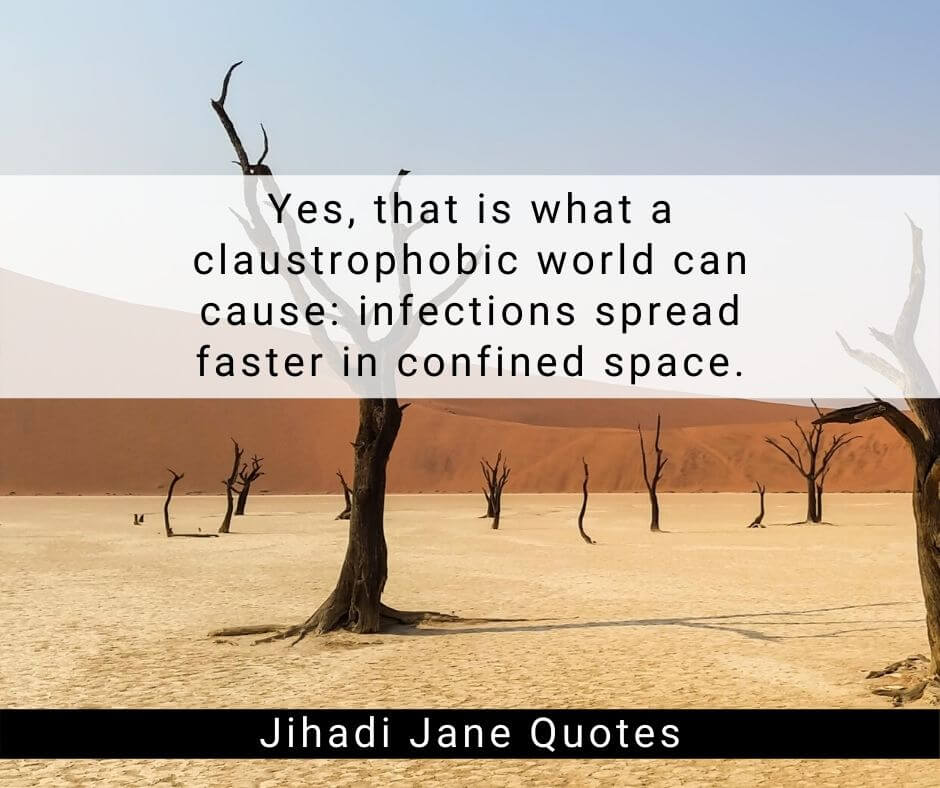 Tabish Khair made a great plot

Tabish Khair has done an immensely great job in setting up the condition that made the Ameena and Jamilla put down everything behind them to join the cause they think is grand.

It really provides the situation in which a person feels right to disappear from everyone’s life to fulfil a purpose.

A little fear of Jamilla for her boring future, huge support of Ameena, growing up of Jamilla, and brainwashing did by Hejjiye, negative behaviour of society for you just because of the way you live your life.

The description of war areas are not powerful but they make some blurry images.

Also, the Tabish Khair failed to make the picture in reader’s minds of orphanage’s interior. Character build up is remarkable.

James was one of those boys you find in every class. His body seemed to be slightly beyond his control. He was always bumping into things. No girls ever fall for him, but he was always falling in love with the most beautiful girl in school.

James was one of those men who seems to choose women who are bound to reject them, as if they are frightened, deep down in their hearts, that they are not ready to be get accepted.

Character development is one of the best points of the book.

I was reading the book, and I was watching the Ameena and Jamilla growing up, but rather than turning 180 degrees towards maturity, they were learning life bit by bit.

Ameena was smart and plan-maker from the start, but it was Jamilla who surprised by not changing.

I mean she changes but in the way that happens not only on papers, but she found out some flaws in the people she followed blindly and started to ask questions to herself about her beliefs.

The Side of Jihadi Jane by Tabish Khair

The characters of James, Hassan, and Halide contribute to story; they were not just placed there to move the story.

They created the turns and show the truth of what happening in those areas, and nature of humans. The manipulation of thoughts and twisting ways of life happening there.

Sabah, not comes to many pages, but has a great impact on the story, is the character that makes you think even after you finished the book.

“Halide gave [the goat] a name: ‘Kaplan’. ‘What does it mean?’ I asked her. ‘Oh, it means tiger in Turkish,’ she said, laughing. ‘Don’t you think it is a ferocious little thing?’
Halide would also, when she could, go out and whisper in Turkish to the goat. When I asked her about it, she said, in her sombre manner, ‘But of course, animals understand what you say. They just do not speak. Every good farmer knows that.”

Ameena made a master plan which involves suicide bombing, releasing of prisoners, in exchange for which enemy will let the orphan-crowds go to the Town.

I like the story, and character act according to their beliefs and experience. Language is not a melody this time. I was reading poetic prose for some time, but Tabish Khair did not talk sweetly.

Tabish Khair explains where the explanation is necessary, but other time, he says directly what he wants to say. Ameena’s first language was English but how she was able to talk with that uncommon vocabulary.

She has the massive amount of words to describe her journey. The way Tabish Khair has written this story makes it look like a diary, a memoir, a narration.

All the types, blending into each other and make it scratchy.

While I was reading it, I hated the momenta the story is losing because of the writing form. The end could have more conclusive, giving something to lean instead of a thought pool.

Do you have such periods too? Periods you wish you could go back to, because you let them pass, because you wasted them, not realizing how precious they were? Periods you threw away like—how does the line go—like pearls before swine? Periods that, if only you could turn the wheel of time back to them, you would knit and embroider forever into your being, never letting them go?

Jihadi Jane by Tabish Khair is a gripping story which unfolds the circumstances that made people support their religion to the limit they forget right or wrong and even continuing to do so after realising that what they were doing is not right.

It is a story of faith driving two friends on a journey, a journey of losing and finding faith in their faith, eventually finding their true ways.

I searched the Jihadi Jane on google and found out that Jihadi Jane is a woman who converted into Muslim and started supporting the terrorist activities in the USA.

So, basically, the book is a fiction but Jihadi Jane is inspired by real events. 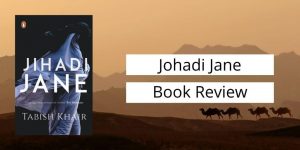