Until the last chapter, I was sceptical about the title of the book.

There is no relevance.

I was sure there is some wrong decision-making, and the actual book title is Pear Drum.

But Pear Drum or Cuckoo, the book failed the most popular writing advice I know.

That does not make story boring, just unorganized. Like Sophie Draper has not given her 90%.

I have her next book ‘Magpie’ lined up, and I will see if it is a habitual thing, or only for the debut book.

What am I talking about?

Your second draft convinces people that what you have written in the first draft was the plan all along.

So, reading Cuckoo feels like the writer is not convincing me that what she has written was her plan from starting.

The book could have taken many ending, and other conclusions make more sense to me than what happened.

May be author planned for that ending, but after realizing how cliche that would be, she changed her mind.

To understand what I am saying here, we need a little bit of context.

Two sisters. One painter (known as crazy one), and other extroverted (known as loud one).

After their mother dies, they have to go back to the hometown – their childhood home.

As always, the illustrator is broke, and gladly accept the house when Extroverted one offers.

The history is dark here, though the story is set in the area that is white with ice.

The neighbour-young-man does not even try, and the crazy one fall for him. After claiming that she is coming out of abusive relationship.


Then the weird things start to happen in that house.

A local man dies, and Crazy one survived an apparent suicide attempt.

All these things in the story point out that Crazy sister is actually crazy, and doing things unconsciously.

The story is set like that—all the things, structures and frames direct in one direction.

How she is supposed to mentally ill, doing the killing unconsciously.

She had a motive to kill the local man, and she had the means. She can easily steal the car from the Neighbor’s garage.

I was ready for the big reveal.

But instead, the big reveal is stupid. And made up.

As such times I always remember Agatha Christie.

To give the surprise in the end, you have to leave the proper marks. So the shock would not be the ending, but the fact that the reader does not see it coming when it was happening in front of his eyes.

But when you hide the fact and surprise in the end by showing something that was not even appropriately acknowledged, it is fooling the reader.

In the final chapter, you can show that the mother is alive and hiding in the basement.

That would be surprising, but you cannot do that without giving a foreshadowing.

That’s what I am saying.

What happened in the book is not a good ending.

Surprising because one cannot expect that because the story was not structured for that ending. It is forced to create the surprise element.

Cuckoo sometime go to explaining the scenery too much. The environment, the dilemmas, and introspecting characters.

The long thinking monologues are hard to write. Because you have to write something meaningful that reveals the character, move the story, and not bore the reader.

But again, the book failed to hold attention.

Some page I have to skim read because the character was thinking-talking about something, that was not interesting.

Usually, she dated the man, who treated her like shit, but she kept living with him.

She is some broken heart girl in her hometown, where everyone hates her, except the handsome man living near her house.

The story is set for a good romance, character development, suspense, and horror.

But it does not achieve any of it.

At the name of the horror, the same line repeats: Have you been bad enough, Caroline?

Do I recommend the Cuckoo?

Right now, I am not. However, it is a good story if you are living in the town of Derbyshire.

You can enjoy the setting written in the book because you live there.

I have not even seen the snow in my whole life; I don’t think I will experience snow. The words feel empty, and everything is terrible.

The book is not that bad; it just a wrong time to read this book for me. 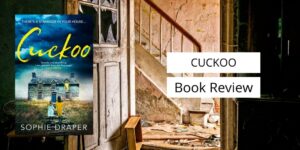 Cuckoo by Sophie Draper is a suspense, or horror story I guess. There is family secrets and drama, but the book seems unplanned.