Behind the Scenes at the Museum by Kate Atkinson | Book Review

I picked this book after reading When Will There Be Good News? I liked that book so much that I bought this book without giving many thoughts.

So yes, I decided to read Behind The Scenes at the Museum, because of Kate Atkinson’s previous works.

Behind The Scene at The Museum by Atkinson is, if I have to describe in one word is, COMEDY IN TRAGEDY.

It is dark and funny at once, and it dares you to laugh at inconvenient times. The writing is insanely helical, the plot attains new depth at every new chapter. But what you see is not what you read, things are little tenser.

There are more scenes Behind the Scenes at the Museum than it looks.

The world of Ruby Lennox is dark. She is the narrator and we see how she perceived the world and other characters. Ruby’s voice is draining, it is a lazy flow. Like a glacier, drifting sluggishly.

She starts her story from the womb, telling different events of her life.

Behind the Scenes at the Museum, give you a big world.

A story with a wire going through different generation, different time periods. Something that Sidney Sheldon do, but his stories show the crime and often have revengeful ends.

This one is about the traits we follow, the persona we share, the similarity in individualities between that can be seen through many generations. 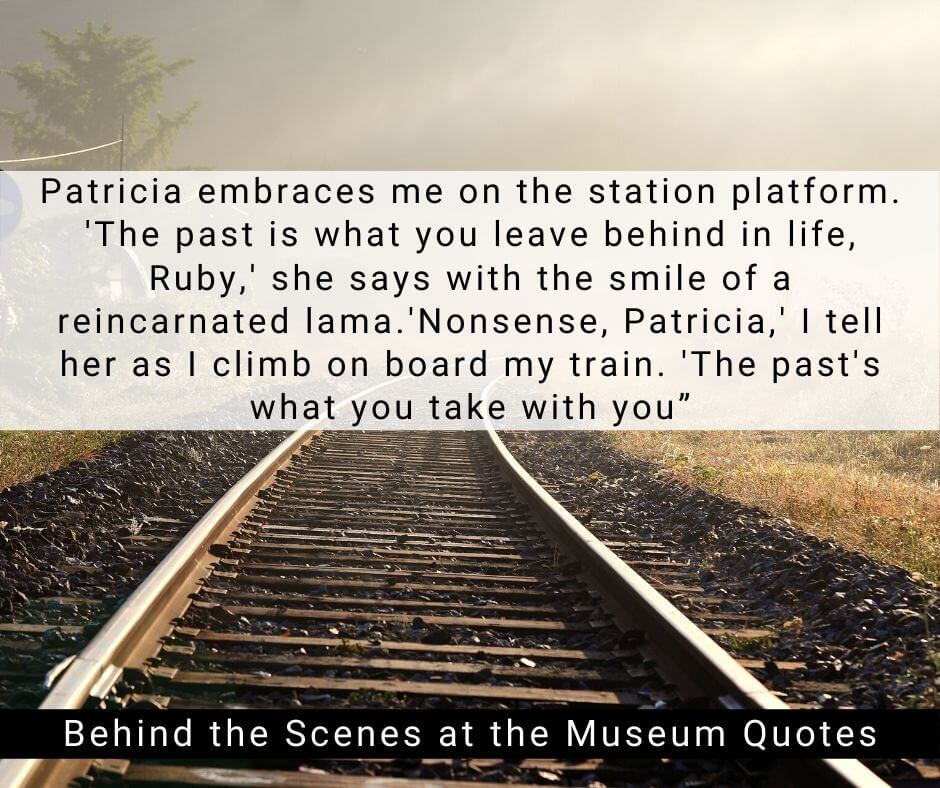 Kate Atkinson laced two stories in this book. One that is voiced by Ruby, the drop of blood and the second one is a scattered story of the Lennox maternal family.

This story is focused on the girls, this I want to say. Opinion might differ, but I stand on this.

The story of Ruby’s mother side is vastly told, and not in a sequential manner. It is randomly distributed, like the way we remember our family memories.

The world Kate Atkinson has made is subtly dense.

Death Behind the Scenes at the Museum

Sometimes it is confusing because there are many characters.

In every chapter, on average two characters die, or more, still the count of characters does not decrease. The death number in the books is so high that it can easily give a challenge to Game of Thrones book.

That is a tragedy, and the dry comedy lies between the lines.

Ruby, tells the story of her family, her sisters, her mother and father.

It is not a spoiler because we all can see from far that something has happened, and Ruby does not remember it. Lennox family hides it from her, but you can see how it affects the family.

A father’s ignorance because he wants to forget too. That event takes a toll on each character, but Ruby does not remember, so she sees it all innocently and ignorantly.

From there comes that smart dry humour.

She is passively involved in the story that is happening around her. From the outsider’s point, she has comments that are accurate, true and solemnly funny. 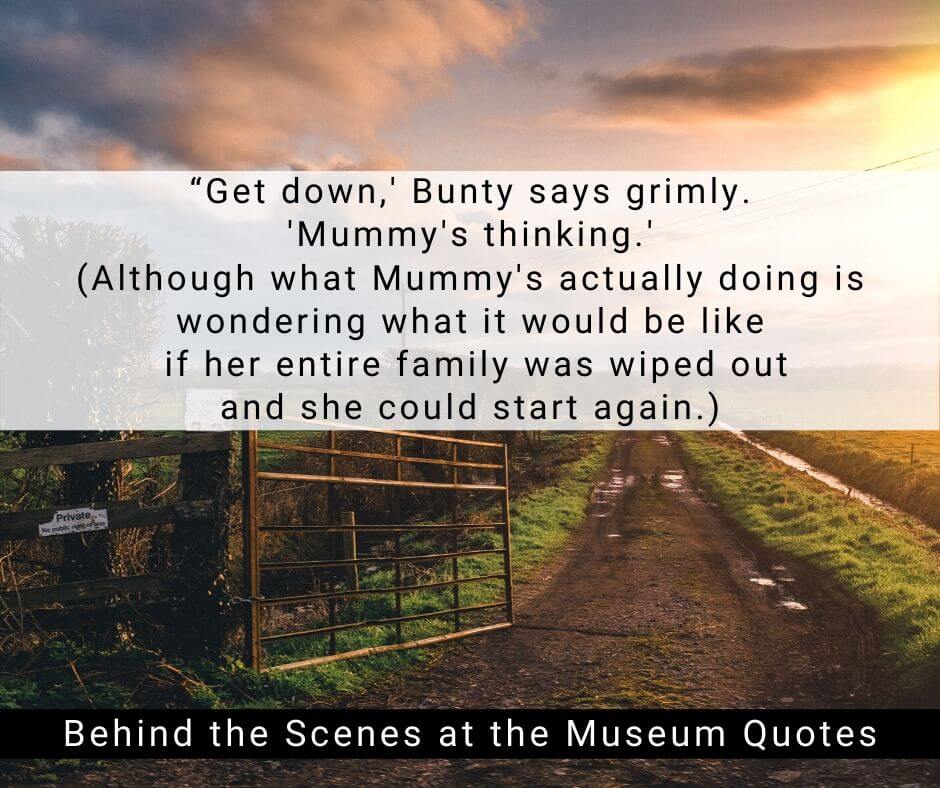 Story of the Family

Another story Behind the Scenes at The Museum is of the maternal family of Ruby Lennox.

Even the centre of gyration of Ruby’s story is Bunty, her mother. The family history starts from the great-grandmother, and move towards grand-mother of Ruby, Nell. There are lots of sisters, uncles, mothers, brothers, and step-relatives.

The second story is shown in footnotes, in form of scattered dust. It is a multi-directional moving of the story that keeps it confusing and interesting.

The theme that you realise after looking at the big picture is how sad women were with their housewifery (is it a word), and some took the separate ways, and some decided to follow the faith. There is no particular conclusion to their lives, they all live it inactively.

The decisions of the previous generation reflect in the next generation. 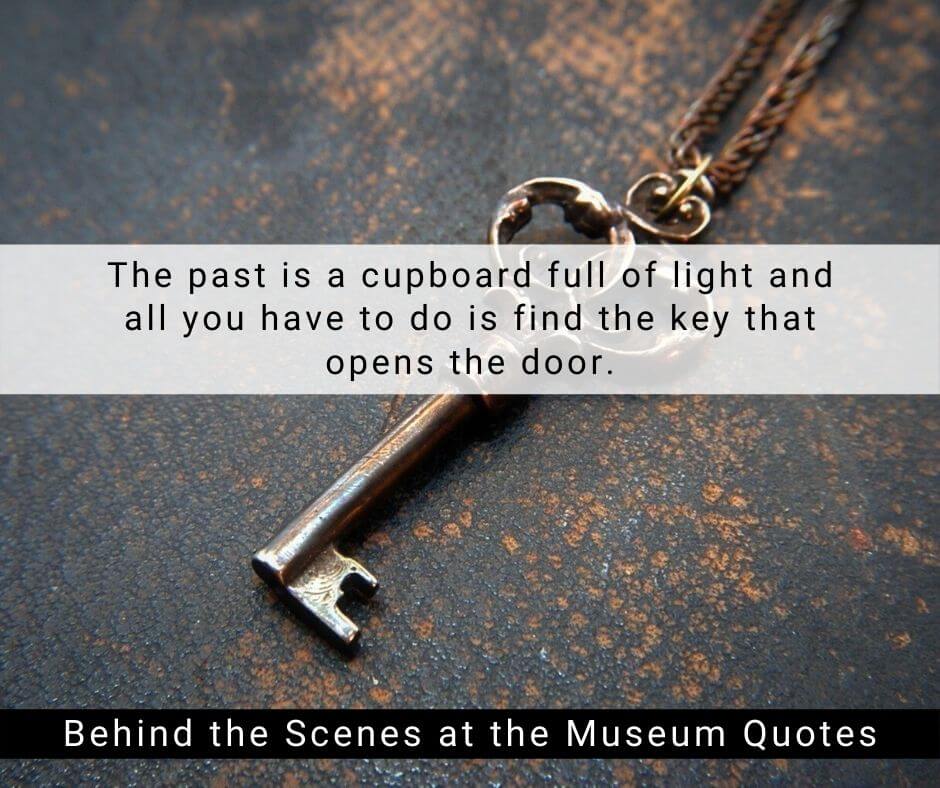 Prose Behind the Scenes at the Museum Book

Kate Atkinson writes with a prose that is destined to irritate you and poke you. You get tired of her, but you do not leave her, it is like a friction. A foe and an enemy.

The writing is, what should I say, ummm, the old soul inside a kid’s body. If you read it the second time, you will find that how gracefully everything sync, however, the writing does not provide you relaxation or skipping, because you are invested in Ruby’s story.

As I watch, the sky fills with clouds of snow feathers from every kind of bird there ever was and even some that only exist in the imagination, like the bluebirds that fly over the rainbow

Women Behind the Scenes

I think I should talk more about this subject.

The women in this book are in distress and hate their mediocre life. That is their house life. They want to do something else. Mother seems to hates their kids, their husbands and siblings.

They grew bitter and bitter. It is a grey topic that Kate Atkinson tells with cloudy brashness.

Every woman at one time or another thought of parting with everyone and starting a new life somewhere else. Even some do it.

They run away and live their life either like they wish or not.

Bunty’s character here is too strong.

She is the character that has a great impact on the story.

In the end, Roxy realizes what she has forgotten. It is too late.

The Lennox family has suffered enough. Ruby does not realize actually, a man yells the truth at her. It is so funny, the truth to be yelled, like the truth is too heavy just to be told, because it will drop before the target, the man throws the truth at her, it hit her.

The truth is itself so hard, and when you throw it like that, its force multiply.

I have been to the world’s end and back and now I know what I would put in my bottom drawer. I would put my sisters.

Behind the Scenes at the Museum is enjoyable and you could lose touch with reality if you read it with attention.

Read it slowly, I know, but it is still worth the time it is taken.