Behind Closed Doors Review by B. A. Paris | Opening the Doors

It is not always that I complete a book in a single day. Sadly I used to do it once upon a time. But that time has long gone, my back aches all the time, and now I understand why Tolkien describes the trees for four pages.

Behind Closed Doors by B. A. Paris (Bernadette Anne MacDougall) is an edge of the seat action pack book. To say it is a psychological thriller would be unfair to books like Bougainvillea House and The Point of Rescue. The book is surely fast paced with a psychologically deranged psychopath in the middle – but the center is not psychological exploration. It says things and moves on, and you want more to know.

There are many types of thrillers.

One is where you already know the end, and you want to see how it all went down.

Sometimes you know the past, and the character creates the complete picture from their memories. Like a missing night type novel where the character does not know what happened last night because they were drunk.

Similarly, there is a suspense when the story is answering everything quickly. The answers although are creating the story interesting as each answer opens up several more questions.

Behind Closed Doors follows no format. But there lies the beauty of it. The book does not serve you a full meal. It’s non-fictional fiction. Without a meat. That’s why the story is moved through dialogues and not scenes. It’s all told and not shown. But telling works here. Because in the end content is important.

Writing could take a place back if the content is of high quality. John Green has cliché writing skill but the content is not that good, still the romantic writing attracts teenagers and makes it worthwhile to read the book.

Where Things Comes Back is circular suspense – where two narratives are closely connected. The climax opens up how one is a consequence of another event.

Sometimes the writing and content are average, but the idea and timing is perfect and it just works. But the execution still matters. Whether you do the story building through the dialogue or scenes – it has to be interesting and not quite plain.

Well more about Behind Closed Doors by B. A. Paris

Behind Closed Doors is the story of Jack Angel and Grace Angel. A charming and perfect pair. Well too perfect to believe. Perfection to the extent of the doubt.

The truth is Grace is a prisoner in the house and Jack is a sadistic person with a clean background and career. Grace cannot escape because Jack has made sure that everyone believes she is mentally ill and she left with no credibility. 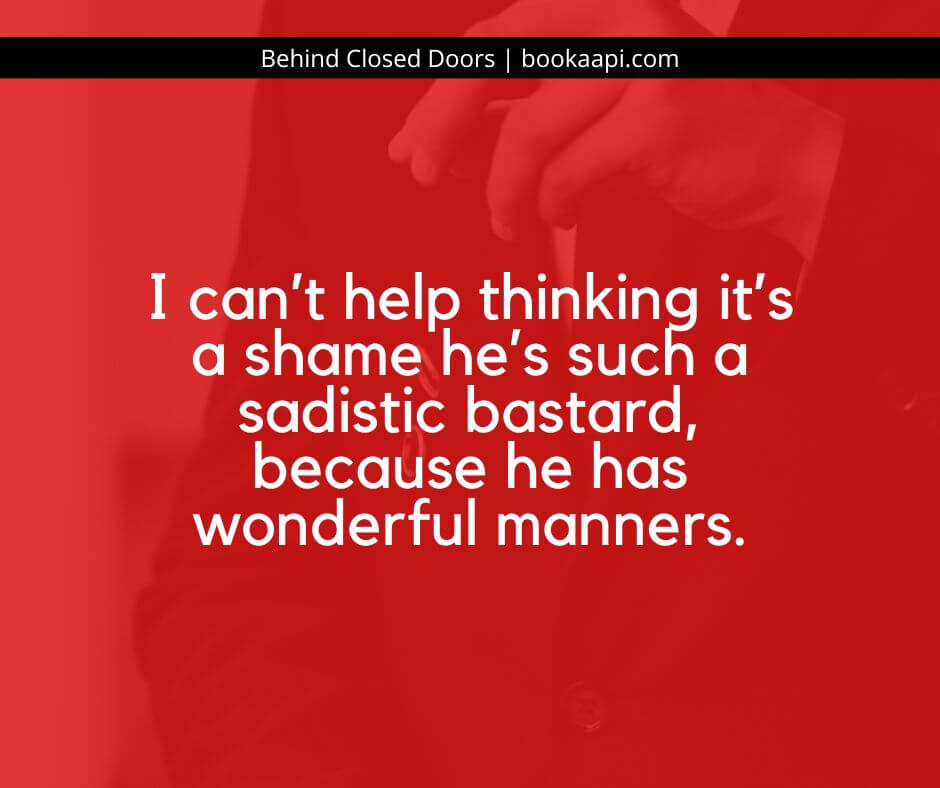 This is the weakest point of the book.

You can discredit a person that easily?

People have friends, families, colleagues, a history of manners, and the ‘mental illness’ does not happen accidentally.

It is good for the story as it moves the story quickly, but it is a plot hole for me. It could have been tighter, more expanded, and close to truth.

Besides, the backstory of Jack is even more hilarious. He became sadistic because he likes when women cry because his father used to beat his mother. It is too simple. Too easy.

Maybe our brain is prone to complex situations where something simple feels like a person has not worked hard enough. Though creating simple things is often harder than the complicated thing.

I mean the Dark TV Series is pretty complicated. It seems hard to write. But The Witcher series is pretty basic. A person who kills monsters. Yet getting it right is also difficult.

Why is everything so hard? 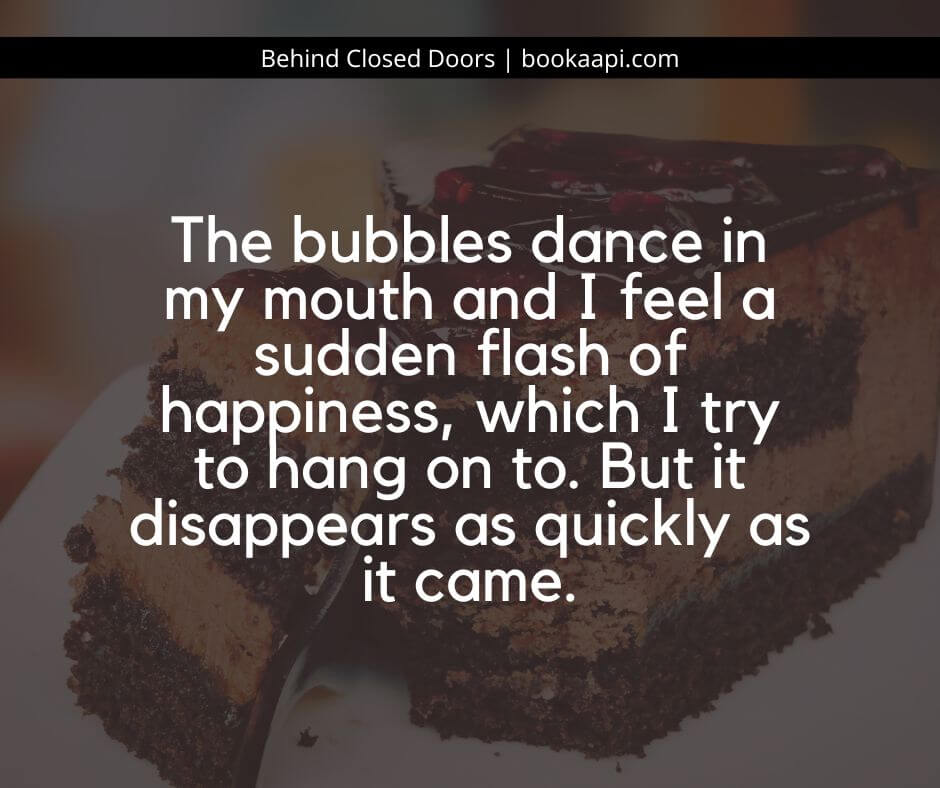 By simple, I mean the Behind Closed Doors does not have a second layer to the story. It is what it says, and looks at first glance. There is no hidden backstory, no climax, and no surprises.

The end is climatic but not left unfinished. To be honest, many thrillers seem to keep the story open ended, and let the reader interpret the end. Is it fair to the readers?

The writer promises the reader to conclude the story. When you are not able to justify the ending of the story, you left it incomplete.

Behind Closed Doors is complete, and cleverly ended.

Once I read a clever quote which was something like think of how stupid an average person is, and then think that half of the world is stupider than him.

So it’s refreshing to meet a clever character like Esther, and more so in a thriller novel. The thriller novels are suspenseful because everyone is lying or hiding something. The truth often comes out when everyone is in the same room in the climax and they all reveal their side honestly.

Behind Closed Doors comes with a smart character, who guesses what is going on from the first introduction. She analyzes the facts and makes sound conclusions.

And the best part is she is kind. Without being a doormat.

The problem is that characters with a kind heart often become doormat for the smart characters. They are shown as stupid at every step. But Esther is kind yet confident, never letting anyone else make her feel any less.

Well, it might look like I have become a fan of Esther, but if you read the book, you will see what I am saying. She really makes the book worth reading with several sentences she said at the end. 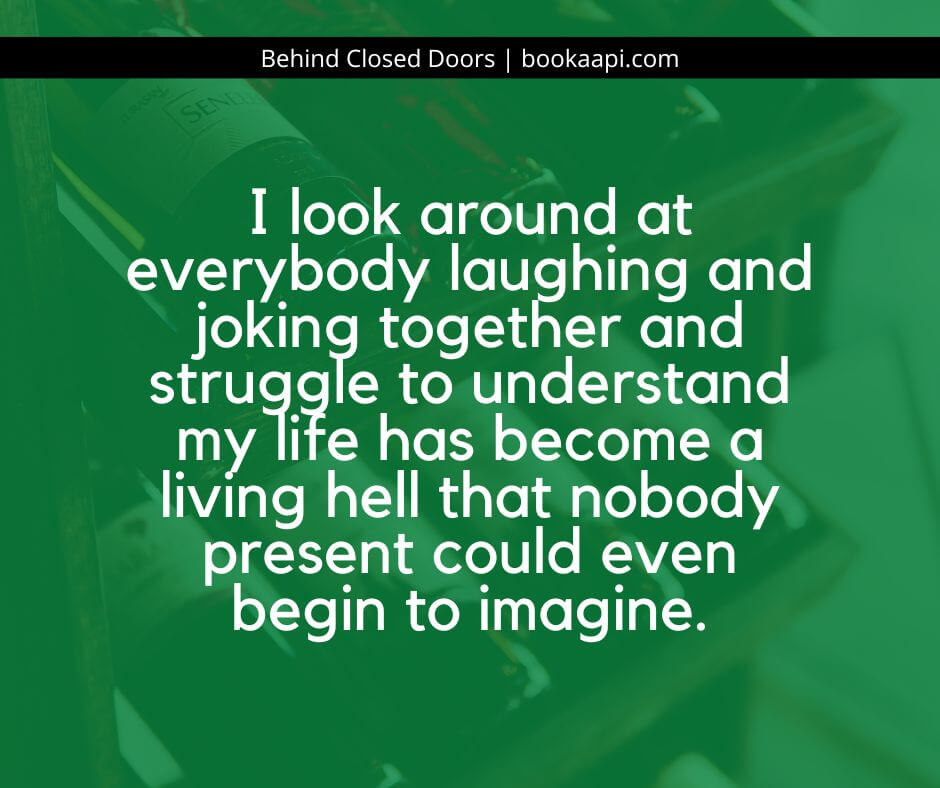 Do I Recommend Behind Closed Doors by B. A. Paris?

Yes. Totally. It is the book you should order right now and start reading the moment you get your hands on it. I am sure you will not be able to put it down without completing it.

And if you have read the book, please let me know what you feel about the books in the comments. 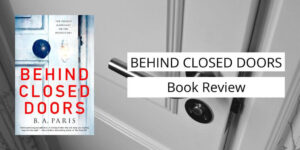 Behind Closed Doors by B. A. Paris is a fantastic fast pace story of the seemingly perfect couple. But what behind the door is sinisterly evil.

Tags: B A Paris