Age of Frenzy by Mahabaleshwar Sail | Translated by Vidya Pai

He is known writer of Konkani language and won many awards included Sahitya Akademi Award for his book Tarangam. Mahabaleshwar Sail writes short stories and also have written many full-length novels.

Age of Frenzy by Mahabaleshwar Sail is published in Konkani language with the name of Yug Sanvar. It is translated by Vidya Pai into the English language.

Vidya Pai is also a popular full-time book translator. It took her a long time to translate this one as in Konkani language, Age of Frenzy is a long novel, and Mahabaleshwar Sail keeps strict eyes on his books.

India is a country of many languages. Language and accent change with the taste of water here.

My bad luck that I know only three languages. Hindi, English and Urdu.

I was mostly reading this three languages, so this time I decided to move on to a different backdrop.

Came across the Age of Frenzy.

I would prefer to call Yug Sanvar (Age of Frenzy) a piece of creative writing that is based on historical events.

And indeed it is a story blending with the history.

This book gave the answer of this question:

How can some lakh Foreigners be able to rule the country of several crores?

It seems unbelievable, but it did happen. British ruled the India for hundreds of years. And with power.

We learn that they play the divide and rule card. But after reading this book, I am wondering that if we really were that united at the moment that British planned to divide us.

Are not we all are divided from the start?

This book is far before the time of East India Company, they came for the business. This book is about the Portuguese, who came to preach their religion, Christianity.

Shore of The book

The book starts with the whispering that Portuguese has won the war against Moors and they have all the control on Goa now. Soon the news turns out true.

Also turn out that Indian people were cowardy in nature. They were afraid of the white skin, they thought that they are demons.

Anyone who touched them, or take any things from their hand considered as a traitor.

When you read Age of Frenzy, it fuels your anger. I wanted to yell that how weak there spine really is.

Whenever Portuguese pass a new law, all the Indians start running to there temples and start praying instead of fighting themselves.

We see the extreme devotion towards God from both parties in Age of Frenzy.

Portuguese were too much focused on converting that they forget the real message of Bible, while Hindus were too much leaning on their Gods and trusted them, that they refused to do anything themselves.

Hindus were relying solely on their Gods and Christians were taking their God into their hands. 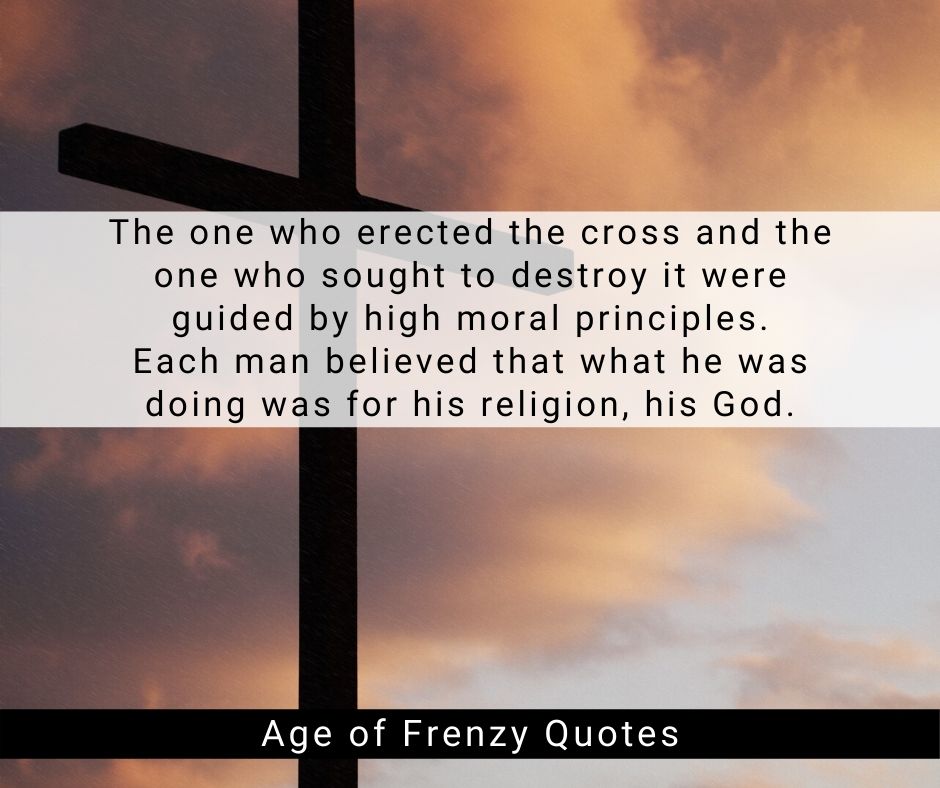 The book shows a fight between a new belief and current belief. What a person will choose when he has to choose between hard life and his lifelong beliefs.

Many people run away and left the Goa, most of the people converted, and a negligible amount of people displayed resistance.

Even if there are no religions, then there will be castes.

A Brahmin always demands respect because of their scholarly status but when they ask them for the advice, they have none to give.

Then there was proud Kshatriya’s clan, who was ready to fight with the other villagers for the power of Head of the Village but afraid to say anything in front of White Skinned People or to protect their village or temples.

Still, when they all converted to Christianity, they remain attached to their castes.

And there were classic topics like untouchability, dung bathing, and cow slaughtering that has been a part of Indian culture, be it be any age of Ravana or Age of Frenzy.

It all makes sense then, why it is so easy to control us because you do not need to divide us, we are already divided. When we are divided, how we are going to fight anyone.

A Brahmin blames Khstriya and whole village and says that it is Karma that they have to go through this bad phase. The villagers blame Brahmin for not doing puja rightly, then one caste blames other castes that they are breaking the norms and that’s why it is happening.

Nobody wants to solve the problem; they all want some divine power to come on Earth. They were literally waiting for them. End of Age of Frenzy

With the burning of two men, Age of Frenzy ends with fire. One was the devotee of Jesus and the other one of Hindu Gods. Both decided to die but never strayed from their path.

The devotee of Jesus was the Padre who becomes the target of a corrupted organization, and the follower of the Hindu was burned by his own neighbors.

In the end, we get to see the depth of the roots of religion that exist in the human heart.

How serious this issue is for a person.

Also, it provides the message that you might be able to take away the religion of men from them, but you cannot take their heart away from their religion.

The book, if I have read it in the original language if I knew how to read Konkani, might have better and longer.

This one I think is short.

I cannot say anything about translation, no idea if it is good or bad. But writing was easy to read.

Age of Frenzy is a good read if you want to read a different topic. 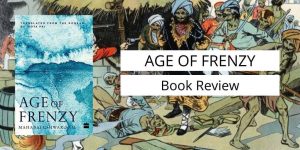 Age of Frenzy by Mahabaleshwar Sail was in Konkani language. Vidya Pail translated it. Age of Frenzy is about faith a person has on his GODS.